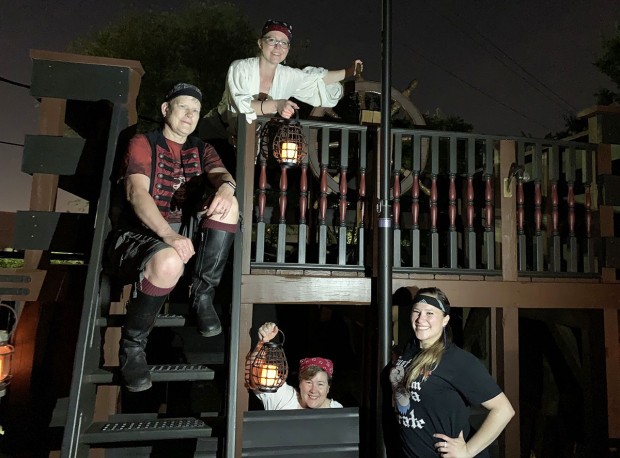 Deb Schmidt and her band, The Ghost PepHers, pose on the best backyard pirate ship in all of Meyerland.

Beware! Reading this Arrrrrrgggggghhhh-ticle might cause you mateys to start sporting eye patches, swigging rum from a jug or calling your boss and you spouse a scallywag.

If you were already privy to knowing that Sept. 19 is the swashbuckling “let your inner pirate out” holiday officially known as Talk Like a Pirate Day, you can thank John Baur and Mark Summers and syndicated humor columnist, Dave Barry. If you’ve never heard all the scuttlebutt before, it’s a day on which everyone talks like a pirate. We seasoned swashbucklers warn you to batten down the hatches and your lips because this knowledge can lead to the uncontrollable spitting out of phrases like “Well shiver me timbers!” “Walk the Plank” and singing “Yo! Ho! Yo! Ho! Pirate’s Life for Me!" all day long and not being able to stop the debaucherous dialect this day.

Baur and Summers came up with the idea when they were playing racquetball and they started talking like pirates. (Usually when one mutters arrrgghh after missing a shot.) They were having so much fun they decided it would be great if there was an official day when everyone talks like a pirate. They chose Sept. 19, since it was Summers' ex-wife's birthday and he thought that was a date he would remember. In 2002, they happened to find an email for Dave Barry, a national columnist based in Miami, FL., and for fun sent him a message about the idea, and the next thing they knew he had written an article and - shiver me timbers! - the rest is history. 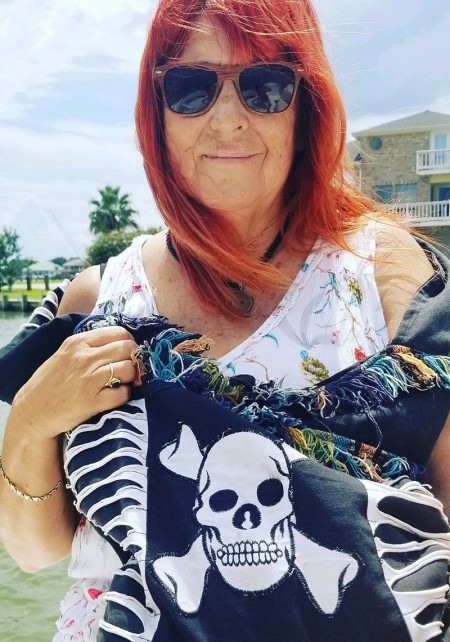 Deborah “Pyrate Queen” Nowinski loves living pirate life and sailing on the ocean whenever she can and bonus if there’s some rum on board with her.

Deborah “Pyrate Queen” Nowinski has always been fascinated with pirates and the ocean and feels that that her fate of having her birthday land on Talk Like a Pirate Day was as lucky as finding a cave full of gold and doubloons.

The Pyrate Queen Birthday Girl said, "I have the salt in me veins, rum in me cups and on me boat, the wind at my back. This is freedom and adventure.”

This year, Deborah will be celebrating her birthday and Talk Like a Pirate Day with fellow pirate friends in a perfect place…a rum factory in the Grand Cayman! Her crew will be toasting to the same islands enjoyed by so many other pirates over the years.

The next time you’re sailing the Seven Seas of Meyerland, (which can have some rough waves when you’re navigating the Chick-fil-A drive thru or the street closures due to construction) make sure to be on the lookout for Captain Calico Jack, also known as Deb Schmidt. 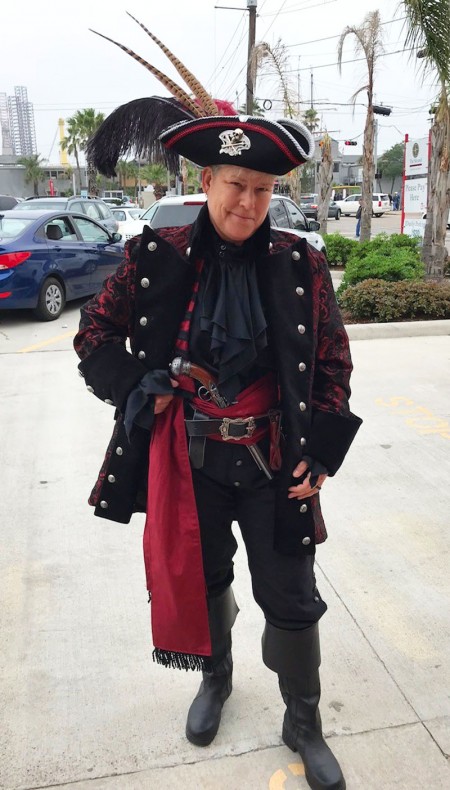 Deb is such a fan of pirates that she and her co-pirate, April Palatino, and April’s dad, Master Shipbuilder Rick Palatino, constructed a 40-foot-long and 15-foot-wide pirate ship in the backyard. A treasure chestful of special features include Captain’s Quarters, a four-level deck, a salvaged shipwheel, authentic brass bell and a flagpole for flying the Jolly Roger. The Meyerland mateys also created a pirate bar and a Seaport dock on the patio.

Captain Calico Jack shared, “The whole pirate thing started with a small 8-foot-long and 4-foot-high ship that was built as a dog bed and kid play toy! The dogs love it and so do the kids. The little ship is named Purrlito after my cat, Purrl.”

Deb enjoys reading about pirates and taking on the role of a pirate. “Pirates had very specific rules and accords that governed them. They lived life to the fullest every day and fought for what they wanted. I am in no way endorsing modern day piracy but the history is really very interesting and encompasses many centuries.”

Deb and April throw an annual pirate bash with pirate grub, beverages and a band. Partygoers wear costumes ranging from pirate wenches to sea captains and scurvy dogs. The two guests that never leave are Bonny and Mary, the skeletons in their pirate bar named after two of the most famous women pirates, Mary Read and Anne Bonny.

Deb said, smiling, “The joy that both children and adults have when they see the ships and play on them really warms my heart and keeps the pirate inside alive. Sometime in the near future I hope to host kids who are battling terminal illness from Texas Children's Hospital and MD Anderson to give them a pirate experience.” 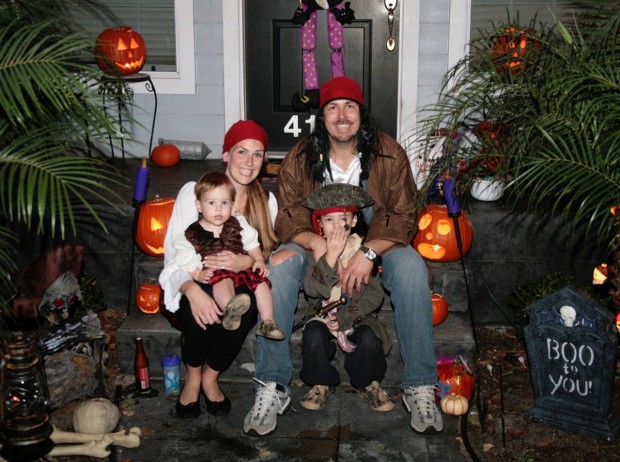 The Brannen Pirate Crew (parents Jason and Sabrina, Joey, age one and a half and Jimmie, age 4) celebrating Halloween in West U in 2007.

When Jimmie Brannen was growing up in West University, he loved being a pirate. A few times, he even wore his pirate outfit to preschool. Many a Halloween night his costume of choice was being a Scoundrel of the Sea. One year, his enthusiasm inspired the whole Brannen family, parents Jason and Sabrina, plus little brother, Joey, into donning their pirate clothes and accessories. It wasn’t too hard of a sell as the whole family loves pirates. so much that a favorite Walt Disney World tradition is that the first thing they always do when they get inside the Magic Kingdom is the Pirates of the Caribbean ride.

Jimmie doesn’t dress up as a pirate as much now that he’s a junior in high school. But he is still living a bit of a pirate’s life as a member of the school’s water polo team where’s he’s always around a lot of water and, like a ship battle at sea, he has to make sure he dodges cannon balls!

Some of the toughest pirates amongst us are a crew of scoundrels made up of military personnel, first responders, law enforcement and other heroes with mobile disabilities. They be a fierce community of adaptive scuba divers known to sail with the Houston based organization, the Dive Pirates Foundation, which supports, trains, equips and provides dive travel to individuals with disabilities. A team of shipmates, location partners and volunteers train and equip the pirates for scuba diving trips. 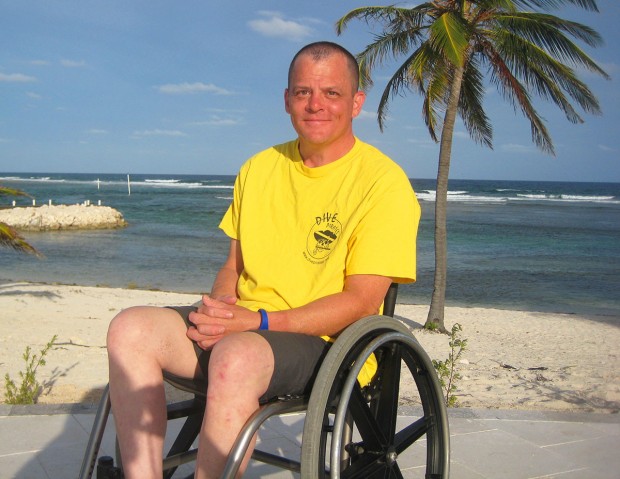 Charles “Mackie” Davis is all smiles as he takes a moment to smell the ocean air while enjoying some island adventures with his fellow Dive Pirates buddies. (Photo courtesy of the Dive Pirates Foundation)

One salty dog Dive Pirate is Charles "Mackie" Davis. Mackie uses a wheelchair for much of his mobility and thought diving was out of his reach until he saw a picture of his friend, Sean, a quadriplegic, on a dive trip and looked into it. Now he's a pirate for life.

“The Dive Pirates have forever changed my life. So much more than I could have imagined. They have made the impossible possible!”

We’ve heard that some of Mackie’s maties will be storming the Westin Galleria on Feb. 15, 2020 for the 16th Dive Pirates Gala. Come get your pirate on dressed in your best pirate flair!

Captain Jack Gonzo, known as Clint Blankenship on non-pirate days, fell in love with the pirate community and pirate music over a decade ago where he heard the pirate band, The Pyrates Royale. He was happy to soon discover Bilgemunky Radio, the original pirate music online radio station. He enjoyed listening to the live broadcasts on Monday nights but unfortunately, in May 2012, they closed shop. 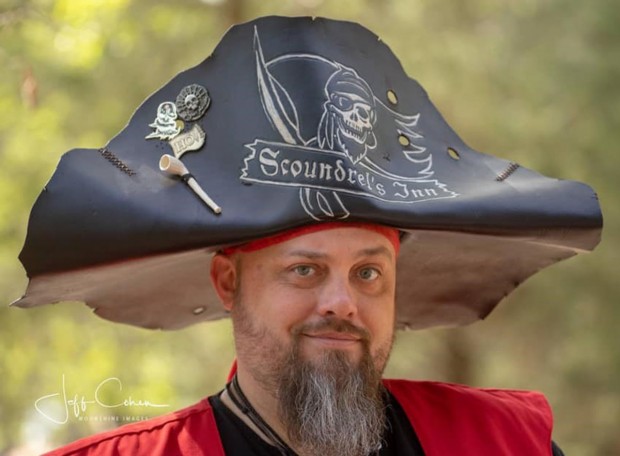 He may also go by Clint Blankenship on a regular day but once Clint puts on his big black pirate hat, he’s 100 percent Captain Jack Gonzo.

Gonzo shared, “At the time I was going to the University of Houston and was part of the initial group of DJs of CoogRadio, UH's student-run online radio station. My yearning to hear and share pirate music combined with the skills I learned at UH inspired me to start Scoundrel's Inn, a live online radio show. The live broadcast is on Wednesday nights 9-11 p.m. CST and always available as a podcast on the Scoundrel’s website.”

Captain Jack Gonzo talked about Houston’s pirate community being active and thriving. “There are pirate festivals parades and renaissance fairs to find fellow pirates in every state. This past summer, we had the First Annual Lone Star Pirate Festival that saw over 400 pirates dancing and getting rowdy at Warehouse Live. I am a big believer that a pirate community thrives when it has local bands that can bring likeminded people together.”

Gonzo invites all sailors coming to the Texas Renaissance Festival to join a shipload of pirates enjoying grub, lifting up a glass of grog and causing a ruckus at the Sea Devil Tavern (located inside the TRF) especially on the pirate-themed weekend, Oct. 19-20.

So put on your pirate pants, dig up your eye patch and get ready to talk like a pirate. Just be warned, the curse of Talk like a Pirate Day is that once ye start squabbling like a swashbuckler it can be harder than trying to heave ho the waves of the Seven Seas or getting the Captain’s parrot to quit squawking. Savvy?!

Brush up on your “Pirate language” – check out these tips on pirate vocab and create your pirate name here and starting talking like a pirate. 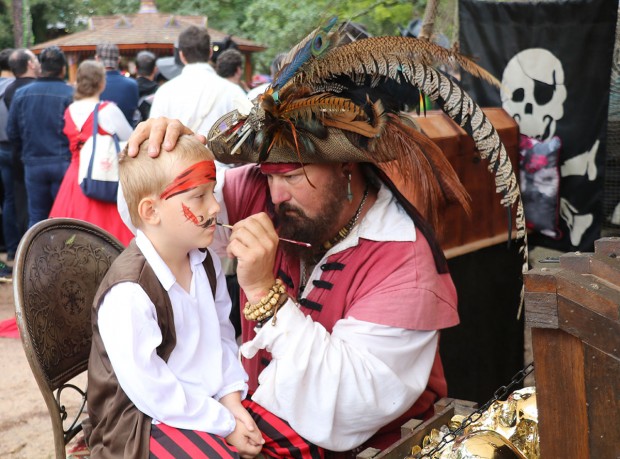 Stargazing with Houston Astronomical Society at Discovery Green
Sat., Oct. 5, 7-9 p.m.
500 McKinney
Houston, TX 77010
Volunteers from H.A.S. will be on hand to show off the moon, planets and more through a number of telescopes. 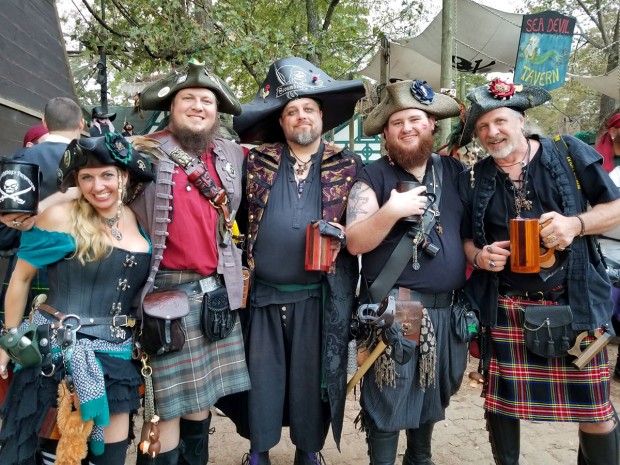 Scoundrel Inn's very own Captain Jack Gonzo enjoying toasting adult beverages with some of his fellow mateys at the Sea Devil Tavern during the Texas Renaissance Festival. (Photo courtesy of Penland Pin Ups and Photography)

Texas Renaissance Festival, Pirate Adventure Days
Oct. 19-20
21778 Farm to Market 1774
Todd Mission, TX 77363
Avast, Ye Hearties! Heave to and come ashore for the most piratical party on the seven seas. Show off your best buccaneer frock in the Best Dressed Pirate contest and try your luck at the Fish-N-Chips eating contest.

Pirates! Legends of the Gulf Coast
2313 Harborside Dr.
Galveston, Texas 77550
Admission: Adults: $10; Kids age 5-13: $6.75; Kids 4 and under: Free
During this family fun adventure, meet resident pirates while learning about the pirates and their privateers that roamed the Gulf Coast during the golden age of piracy. Yes, Galveston was once inhabited by pirates!

Houston Sword Sports
10371 Stella Link Rd.
Houston, TX 77025
Houston Sword Sports is a fencing club with the goal of introducing members of the Houston community to the sport of fencing. They offer free fencing classes the last Friday of the month if you’re interested in trying it out.

Hidden Treasure Hunts
Hunt for treasure and have an adventure. Solve riddles and clues in a citywide hunt to find a treasure chest hidden somewhere in Houston. A portion of the proceeds will go to a local charity. 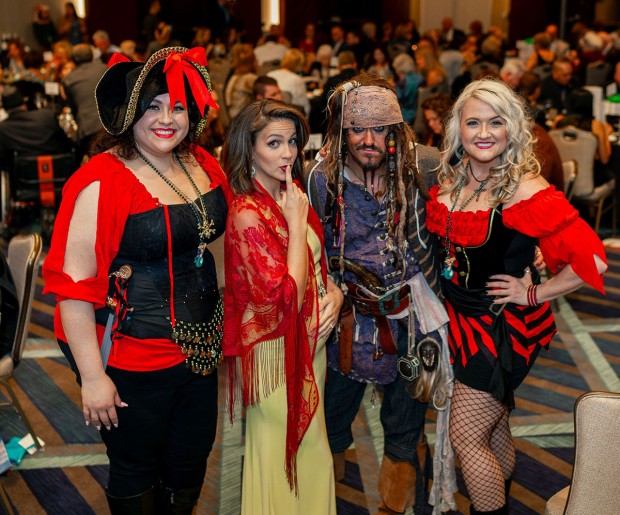 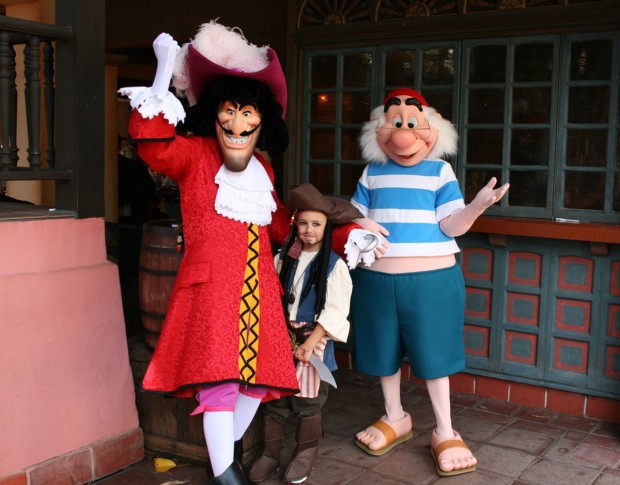 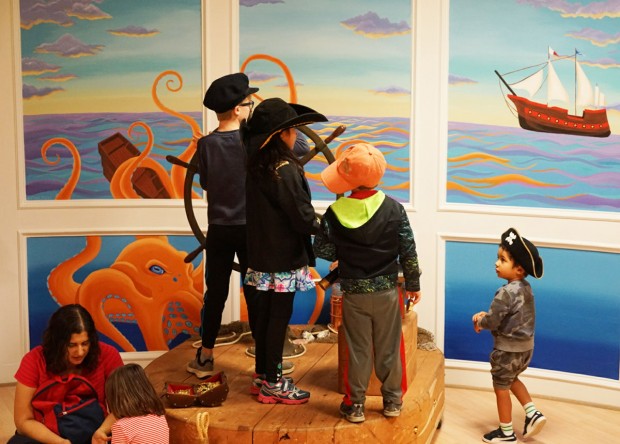 10:00 am to 6:00 pm
Location:
Children's Museum of Houston
END_OF_DOCUMENT_TOKEN_TO_BE_REPLACED