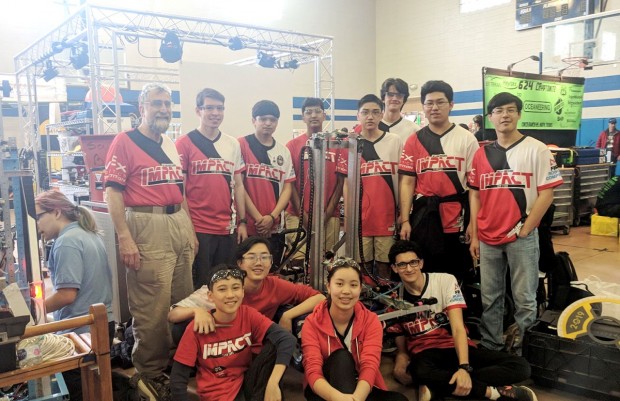 Team Impact 2585 poses with their hand-made robot, which placed in the top eight during competition.

From the outside, T-Building 06 looks like every other portable classroom on Bellaire's campus: a boxy shape composed of cream corrugated metal. However, as I approach the door, I realize that this is not your typical textbook classroom. Even from the outside, there is an unfamiliar sound of scraping, scratching, and clinking, and the source of these sounds are made evident as I enter the building. As I approached one of the students to ask what they were working for, one of them quickly turns to me and replies "Robotics" and returns to their work.

The Bellaire Robotics team, Impact 2585, was founded in 2008 and has been an active part in the Bellaire community since then. As a completely student-run club, Impact 2585 has been able to provide Bellaire students with hands on opportunities in STEM related fields.
Caleb Hu, head of VEX, one of the robotics competitions that the team participates in, discusses why robotics brings a unique opportunity for Bellaire students to participate in.

“We think that Bellaire thrives with robotics because it contains many core values of STEM,” Hu said. “While many other clubs, such as Coding Club or Math Club focus on very specific aspects of STEM, robotics is the application and a mix of physics, engineering, programming, and math, all of which can greatly help one’s career.”

Although Impact 2585 has struggled due to low financial support, they placed in the top eight at one of their competitions, a huge achievement for the club.

Miles Mackenzie, one of the club’s treasurers, discusses the team’s accomplishments last year.

“One of the main highlights of the team last year was that it placed in the top 8 teams at one of the competitions,” Mackenzie said. “This has never happened before in the club’s history, and I think this year’s team would like to continue placing in the top 8, not just in one competition but in several.”

Jimmy Xin, president of Robotics, further discusses the challenges that the team has faced through its years at Bellaire. 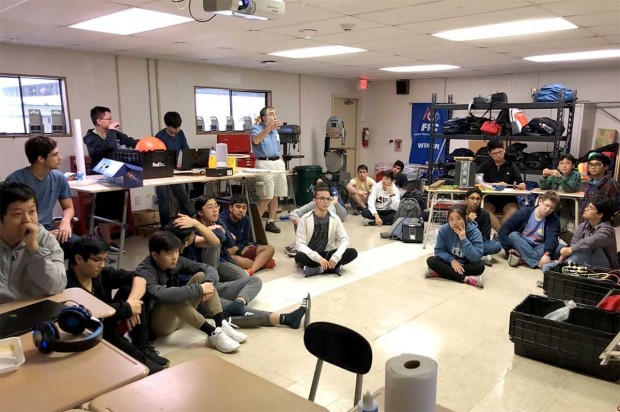 Bellaire Robotics Club meets to discuss their progress with their advisor.

“We are a student-led, student-run team, which has its pros and cons. Our budget is on the lower end, especially because our main sponsor left Texas last year and, as a result, left us,” Xin said. “We are working on ways to raise money in order to compete. We also lack professional help. While many teams have upwards of 4 mentors, we operate on one mentor only.”

This year, Impact 2585 is looking to expand robotics at Bellaire and place at many more competitions, which would give them more funding and publicity as a club, as Xin explains.

“The team has slowly but steadily been growing in the past years, so we’re hoping to build a competitive bot that can get us to semifinals or finals, with a goal of winning a competition,” Xin said. “Ideally that’ll also qualify us for the state competition, if we have the funds for that. We’re also hoping to leave the team with a sturdy base for years and create a strong outreach program.”

If you are interested in helping Team Impact 2585, consider becoming a sponsor or donating to their GoFundMe. More information can be found on their website here. Or, help them find a mentor (college student or older with an engineering background) to help with their club by emailing them at [email protected].