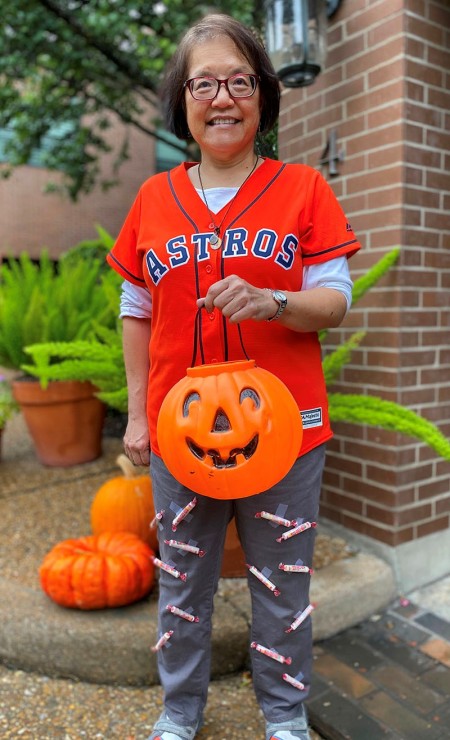 How did Halloween get here so fast? If that’s what you woke up thinking this morning, do not fret. Even if you didn’t focus enough earlier (this summer?) to find a fabulous professionally-made witch or mummy costume, you can still win the costume contest. All it takes is gathering a few things that you’ve already got around the house or can easily snag on a trip to Michael’s, along with a little creative inspiration. We can help with that part! Read on for a few last-minute costume ideas.

Smarty Pants
Buy a bag of Smarties at the grocery or drug store, and safety-pin or tape them (double-sided tape makes this easy) to your favorite comfy jeans. Throw on a t-shirt, bonus if it’s candy-colored, and you’re a Smarty Pants. Smart, too, because you’ll be the comfiest one on the street.

Queen of Hearts
Pull the hearts out of several decks of cards. Tape them to a red t-shirt (you could also hot glue-gun them on if you don’t care about permanently wrecking the decks of cards). Put on a crown or a tiara. (Doesn’t everyone have these somewhere in a dress-up box? If not, you can find one in the toy section of the drug store.) Put some bright red lipstick on, and if you want to keep going, add some long, fake eyelashes.

50 Shades of Grey
Make a quick trip to the paint store, and swipe all their grey swatches (probably a good idea to let them know what you are doing). Tape or staple the swatches to a t-shirt, and you’re done.

Bubble Bath
Blow up a bunch of round balloons in shades of white and pink. Safety-pin them to a white t-shirt, and tape or hot-glue a few to a headband to go on top of your head. You could also safety-pin more balloons to white pants if you want the whole body treatment.

Ina Garten
Throw on an oversized button-down shirt – white, blue or black. Top it with a big scarf wrapped around your neck and tucked inside of the shirt. Add some pearl or silver ball studs, and maybe a chunky gold bracelet or two. If you have brown hair, especially a brown bob, even better. As Ina says, How Easy Is That?

Gumball Machine
Buy a large bag of multi-colored, medium-sized pom poms, and hot-glue them to a white t-shirt from the bottom hem up. Leave some white space at the top of the shirt, on the neck and shoulders. Make a sign on white paper that says “25 cents,” and tape it somewhere on the shirt.

Jed from The Bachelorette
Top off a white t-shirt and jeans with a plaid, flannel shirt, and leave it unbuttoned. Add a pair of hiking boots and maybe a woven bracelet if you have one. If you can get a little beard going, great, if not, draw one on with brown mascara or eyeliner.

Catcher in the Rye
Make a nametag that says, “Holden,” and tape it to the front of a blue shirt. Grab a catcher’s mitt and some rye bread. Done!

Ceiling Fan
Use a Sharpie to write “CEILING” on the front of a t-shirt. Carry either an accordion fan or a pom pom. You’re a Ceiling Fan.

Bottleneck
This one is super-easy (like the others aren’t!). With kitchen string or whatever string you have on hand, tie an empty Coke bottle around your neck.

Envelope
With a Sharpie, draw a triangle off of an edge of a white piece of poster board. Punch holes spaced a little less wide than your shoulders in the tops piece of poster board and another. Loop string or ribbon through the punched holes to create shoulder straps, and tie them off in knots. Wear the poster boards so that you are sandwiched between them, like the insides of an envelope.

Spice Girl
Get dressed like normal – maybe jeans and a t-shirt. Carry a clear bag of spice jars from your spice drawer.

While we can’t promise these last-minute DIY costumes will garner the best treats on the block, we can pretty much assure you that they’ll evoke a few how clever! smiles. Not the least of which will be your own.