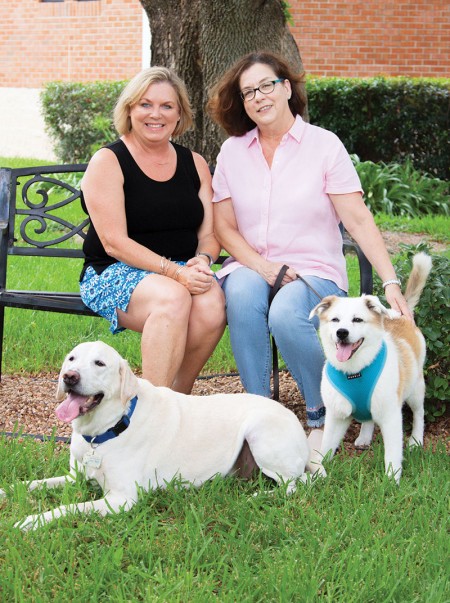 WANNA BE FRIENDS?  Neighbors Cheryl Cunningham and Diana Marks bonded nine years ago when they met while walking their dogs, Gracie, a Border Collie mix, and Jake, a yellow Lab. The friends take regular walks together each week, along with Diana’s husband, Rob Marks. (Photo: SNAPS by Chelsea/Chelsea Coon)

Want to make new friends? Get a dog, and head outside. Buzz resident Cheryl Cunningham met two of her closest friends, Rob and Diana Marks, through their dogs.

Cheryl, senior director of special projects for Vacations To Go, has a 15-year-old, brown and white, medium-sized border collie mix named Gracie. Gracie greets you when you walk up to her, wags her tail, looks you up and down with her big eyes and even says hi with a bark. Cheryl, often seen with a big smile, is outgoing and friendly just like her Gracie.

Gracie and Cheryl live near Tanglewood Park, where you’re likely to see the pair trotting across the grass, Gracie’s tail straight up in the air while she sports a harness.

Cheryl met neighbors and now dear friends Rob and Diana nine years ago, while out walking Gracie. Rob and Diana were walking their fuzzy, 10-week-old yellow Lab puppy, Jake. Jake is a handsome and strong yellow lab whose tongue falls out to one side when he pants.

Rob and Diana and Cheryl frequently hung out when Jake was a puppy. Jake drew people in. Even former First Lady Barbara Bush spotted him while she was taking her two dogs out for some fresh air at Tanglewood Park, where she was a regular.

Jake had just started puppy school, and Mrs. Bush’s two small dogs started barking at him. Jake patiently let them walk by, unsure in his puppyhood what to do. Diana said Mrs. Bush laughed and said to her, “I know. They are so bad.”

Jake and Gracie’s parents lost touch over time but kept bumping into each other on walks. “I do believe that dogs bring all people together, no matter how old or young you are,” said Diana. “They bring us unconditional love, and they are always happy to see you. We have friends for life from dogs bringing us together.”

About five years ago, the group came up with the idea to walk their dogs together at night, especially during winter months when it gets dark earlier. “Sometimes it [is] Jake and Diana, Jake and Rob or both with me and Gracie,” said Cheryl.

Over time, and through many hours of dog walking, strong friendships have formed. They catch up while they walk, chatting about favorite sports, books, current events and whatever is going on in their lives.

“It went from walking at night after work to [adding] two to three walks on the weekends,” said Cheryl. “We have our 7 a.m. morning Starbucks runs on weekends.” Their local Starbucks staff even knows Cheryl, Diana and Rob and prepares their lattes and puppy lattes when they arrive. Jake and Gracie patiently wait outside.

Cheryl says nine years of the walks and company have kept Gracie young at heart. “In today’s world, we can go years without really knowing our neighbors,” said Cheryl. “Because of our fur-family, we have developed a true neighborhood feel, getting to know [each other], both human and fur varieties.” 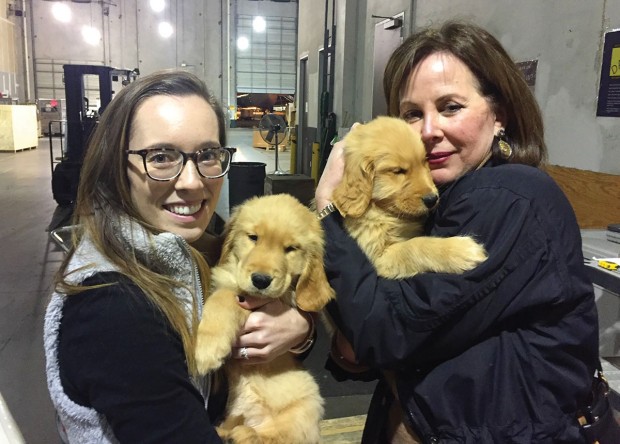 NEW FAMILY MEMBERS Friends Anne Stewart and Caroline Rogg (pictured at an airport hanger in 2018 picking up their new Golden Retriever puppies) were perfect strangers until they met through their dogs, Sage and George. They have stayed close friends. (Photo: SNAPS by Chelsea/Chelsea Coon)

Golden Retriever fan and owner Anne Stewart met a new friend, Caroline Rogg, when the two former strangers welcomed sibling goldens into their homes from the same litter. Anne’s dog, Sage, and Caroline’s dog, George, got to play as their moms became friends, too. Anne says if it weren’t for Sage and George, the pair would have likely never met – and it is a friendship she cherishes.

After the puppies’ rounds of shots, Anne and Caroline started taking Sage and George on “play dates” at Levy Park or at each other’s homes. Caroline, who was studying in dental school when George joined her family, has since moved to Washington where her husband has started his residency, but the friends still stay in touch.

They keep updated through social media – both Sage and George have their own dedicated Instagram pages – and update each other through texts and pictures.

“In my experience, I have never met a Golden owner I didn’t like,” said Anne. “And we are annoying people because we talk quite a bit about our Goldens. They are members of our family.”

Editor’s note: Have you met a friend through your dog? Share your story at [email protected] or in the comments below.