A Giant Halloween Night that will Grab Your Attention 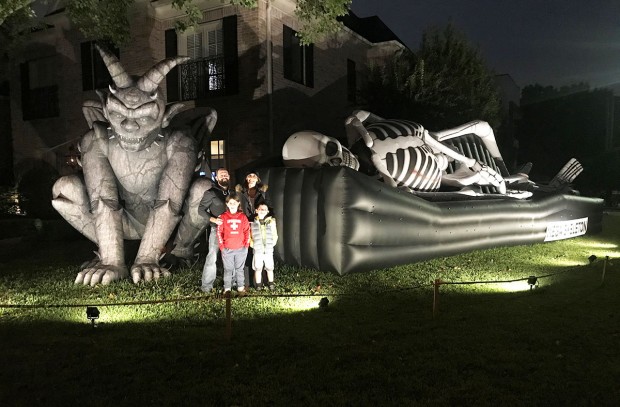 Lauren Hill repurposed this inflatable into a fun Halloween decoration. Pictured is the Hill family - Lauren, Josh, Ellie and Zachary - with their mega skeleton and gargoyle.

Beware! If you’re roaming the streets of Bellaire on Halloween night, be on the lookout for frightful and delightful sights in the 5300 and 5400 blocks of Huisache. Even the blindest bat should be able to spot the bone-chilling, 35-foot long, 20-feet wide and 12-feet tall mega skeleton laying in his coffin sprawled across the front lawn. Then, if you dare, look across the street and be prepared to witness the mob (but in a nice line) of drooling-like-zombies trick-or-treaters under the trance of the mesmerizing blinking lights of the ferocious Claw Machine! And to think that all of this Halloween excitement happened because of Dr. Oz and a band of thieves. 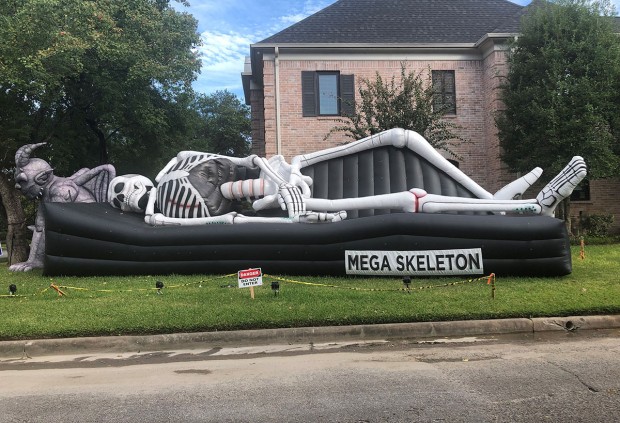 This is the mega skeleton's fourth Halloween in the Hill's yard.

Medical and Educational Outreach communities typically order a giant body part to be created. The inflatable designers work with doctors and experts to make the inflatables as accurate as possible. It can be challenging and take months and numerous attempts to get it just right.

So back to Dr. Oz. The show’s producers called Lauren and shared that a chiropractor was booked to film a segment on the spine and they requested a giant medical teaching skeleton. The turnaround time to create it was less than usual, but Lauren felt her team could meet the deadline.

The first version didn’t look like anything you’d find in a med school. It looked more like something you’d find at a really spooky haunted house. So they went to plan B and Lauren decided that this mega skeleton could come back to life as fantastic Halloween decoration at her house. He’s become a neighborhood favorite. This will be the mega skeleton’s (some folks call him Slim) fourth Halloween. This year, his friend Stony the Gargoyle is joining him. 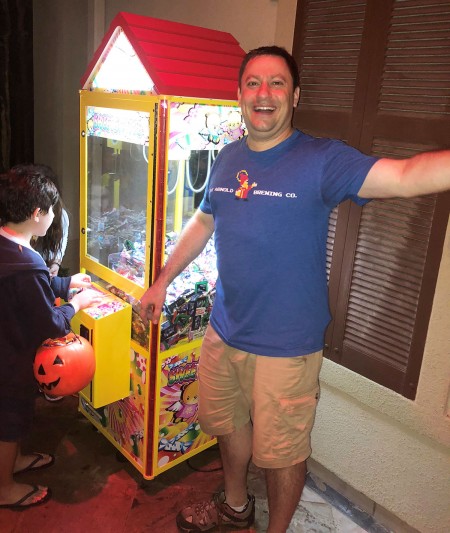 Now, onto the Claw Machine’s story. In October 2017, Charlie and Lindsey Kalas were having a great Halloween night passing out candy from two bowls on their front porch and enjoying watching people’s excitement over the giant skeleton in front yard of their neighbors, the Hills. Doling out all that candy, telling all those trick-or-treaters how cute they look and possibly sneaking some fun-size bars can make people really thirsty. The Kalas decided a margarita sounded good and they went inside to make one. They decided to just leave the bowls on the porch for trick-or-treaters to get their own few treats and move along to the next house.

When they came out about 15 minutes later, ready to settle back in and sip on their delicious cocktails, they were shocked to discover that both giant bowls of candy were empty. The trick-or-treat “I don’t have Halloween Candy Etiquette” Thieves had struck again. Well, just like you never take candy from a crying baby, you better not take it from Charlie Salas either.

Charlie was on a mission to not have his Halloween joy stolen again the next year so he decided he’d find a way the candy thieves wouldn’t be able to steal the candy. He ingeniously decided to put the candy in a claw machine similar to one you would find in an arcade. It’s been a great hit. The trick-or-treaters have a blast maneuvering the claw to grab a fistful of candy and, for two Halloweens straight, not a single piece of candy has been stolen.

This year, Charlie and Lindsey ordered a margarita machine for their Halloween night festivities. They always have friends and family over to enjoy the night and assist the trick-or-treaters line up or figuring out how to work the buttons and move the lever to get their candy out of the machine. 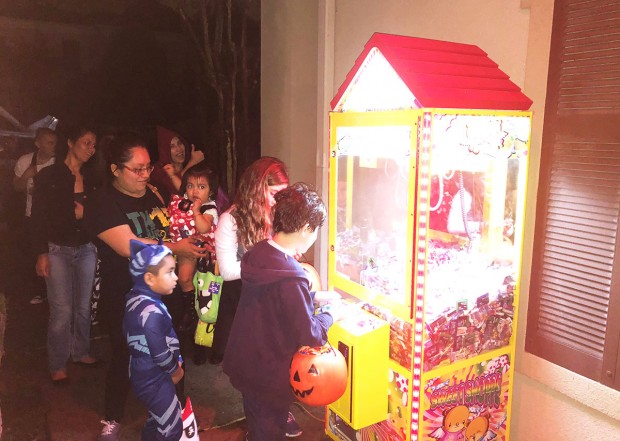 The claw machine, similar to one you would find in an arcade, is a hit with trick-or-treaters every Halloween.

Another fun neighbor on their block uses a baseball pitch count contraption to keep a count of many trick-o-treaters come by the houses. Last year the estimated amount was 800 visitors.

So, if you want to have a larger-than-in-real-life Halloween night and feel like a kid again getting candy from a claw machine, come on over to Huisache street. You’ll have so much fun it’s scary.