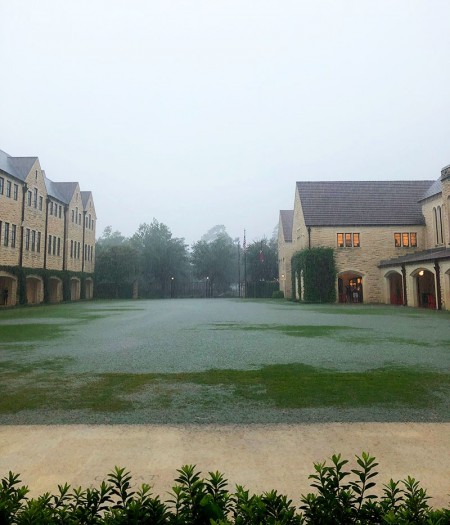 Imelda made landfall rapidly and flooded the Great Lawn at St. John's.

While the worst of the torrential downpour was expected for Sept. 18, the rain was comparable to a standard Texas thunderstorm. The sudden turnaround of events took both meteorologists and local Houstonians for a surprise when over six inches of water piled over street curbs and
highway ramps.

Fortunately, none of the facilities at SJS were severely damaged, but the rain did flood the Great Lawn and caused car damage to many students who parked in the garage adjacent to St. Lukes. In fact, a tow truck began to move cars that were parked in the dip of the garage to a higher level.

Some students came home to flooded houses and damaged properties after leaving campus. 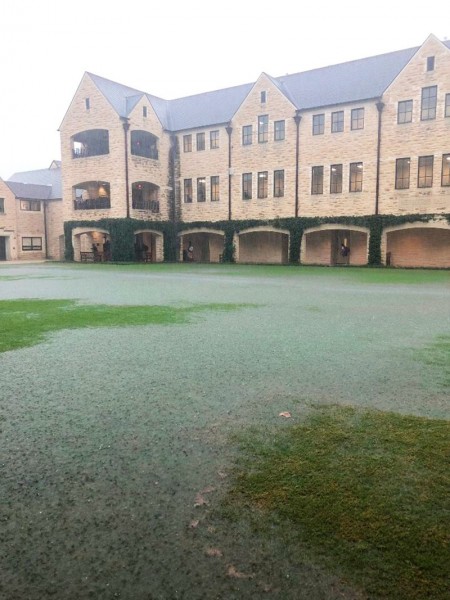 A view of the Mewbourne building on campus during the storm.

“Although I was not as affected as others, the hurricane did however offer an inconvenience,” junior Cai Flowers said. “I had to stay at a friend's house for a few hours, miss practice, and I got home really late. I also had to leave my car at school overnight.”

The potential consequences of Imelda were unsettling for many. Flowers mentioned that Harvey was more impactful than Imelda and that it caused way more of an inconvenience. While Imelda was a large disruption, much less damage was inflicted to the majority of Houston as a whole.

Tropical storm Imelda left many students and faculty members in utter fear for their city, as memories from Harvey flooded their minds. After a traumatic day, HISD decided to cancel school for the following day. Soon after, SJS and other private schools followed their lead. After a hectic couple of days, the school realized that students and faculty needed time to recuperate both physically and mentally. Ultimately, SJS made the right decision cancelling school.

"I’m glad SJS cancelled the day after. I don’t think it would have been fair to still have school because there were people who were literally unable to make it to school due to flooded roads or damage,” Flowers said.

In the event of a catastrophic event such as Imelda, the wellbeing of students and faculty is the priority of a school.