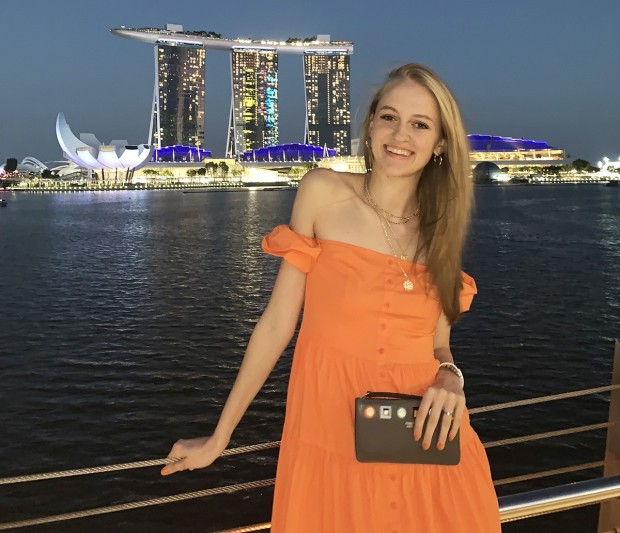 Caroline Carlyle stands in front of Marina Bay, the location in which the final scene of the movie Crazy Rich Asians was filmed.

When will I use this in the real world? Will this ever be applicable outside of the classroom?

Although many may struggle to apply stoichiometry in their daily routine as an adult, Caroline Carlyle, a Second Baptist senior, demonstrates that foreign languages may perhaps be the most applicable knowledge acquired in one’s high school years.

While many were still eating Fourth of July barbecue leftovers, Caroline was aboard a plane to Singapore to attend classes at the Yale-NUS College. A collaboration between Yale University and the National University of Singapore, the college seeks to integrate global intellectual traditions with the goal of educating young people for leadership in a complex, interconnected world. Within a foreign country in which the cuisine was drastically different, the difference in time zones was jarring, and most notably, the national language was far from English, Caroline had no fear.

Equipped with her rich knowledge of Mandarin Chinese, Caroline embarked on her Singaporean adventure fully immersed in all that the beautiful island nation had to offer. In the words of Caroline, “I would eat lunch in a large food court where I tried all the dumplings and traditional foods of Singapore. My friends and I spent our afternoons and nights exploring Singapore: the Merlion on the bay, Marina Bay Sands, the Night Safari and Orchard road. Singapore can be driven in its entirety in a little under an hour. I knew every inch of that island before my trip was over!”

Conversing with her fellow classmates from Shanghai to Beijing in their native language with proficiency and ease was one of the many joys Caroline was able to experience because of the rigorous foreign language classes she had taken throughout her high school career. As a Chinese V student, Caroline prides herself on her speaking, reading, and writing skills in Mandarin Chinese, a subject she has been learning since the eighth grade. Though her comprehension of the language is a feat in of itself, the ability to relate with those of different cultures is perhaps the most profound resource she has gained through her studies. On the Yale-NUS campus, she more specifically learned how global business leaders must utilize their vast cultural insights to create business that thrive in an increasingly globalized world.

From the boardroom to the boardwalk, the art of language transcends divisive restrictions. It seeps through nationality, race, and class to create connections that may have previously proved unlikely. Equipped with the tools she gained through her diligent study of Mandarin Chinese at Second Baptist, Caroline witnessed firsthand the infinite possibilities available to those willing to break down barriers. In her triumphant journey overseas, Caroline bears witness to the fact that in order to go abroad, one must start at home.