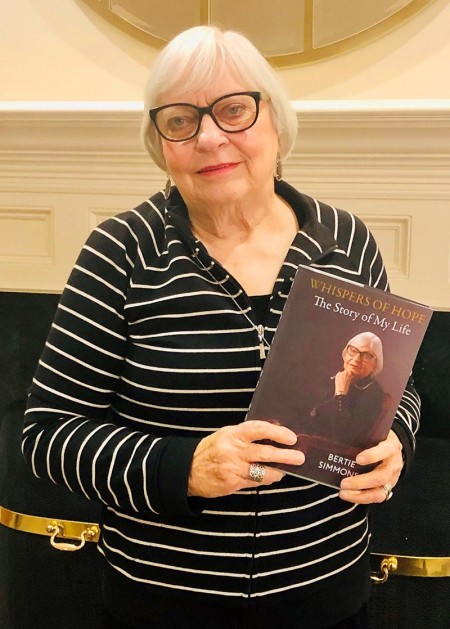 This week I interviewed a Houstonian who recently self-published her memoir. I found her story to be interesting and thought others would enjoy hearing about her life. While I have not yet had an opportunity to read her book, I very much enjoyed speaking with her.

Dr. Bertie Simmons spent nearly 60 years working in the Houston Independent School District (HISD) as an educator, change agent and trailblazer. She recently wrote and self-published her memoir, Whispers of Hope: The Story of My Life, which chronicles her life story from growing up in rural north Louisiana to her decades with one of the largest urban school districts in the country. Having “spent her life fighting for social justice,” she wants to share her journey with others.

Now in her mid-80s, Dr. Simmons started writing her book when she was in college. She said, “All of my life I have been writing, and I would have various sections about different periods of my life…. and I thought I should put all of the sections together to try and encourage people to be resilient and always have hope regardless of how terrible their situations may be.”

Dr. Simmons’ first job here in Houston was as a teacher at Hartsfield Elementary which is near the University of Houston main campus. This was right after Brown vs. Board of Education was decided, and school integration was subsequently mandated by the federal government. As she details her career with the district as she is repeatedly promoted over time, she also traces the integration of HISD, and integration’s long-lasting impact on the district, which still remains today. As she continued to ascend through the ranks at HISD, Dr. Simmons became increasingly frustrated with “board members overreaching involvement which is one of the problems still remaining today with public education” and eventually grew weary of politics interfering with public education.

She retired from HISD in 1995; however, in 2000, Dr. Simmons returned to HISD when she was recruited to finish out the school year as principal at Furr High School. When she was hired as principal at Furr, it had “the lowest attendance rate of any high school in the district.” While she initially committed to three months, she ended up staying there for 17 years as principal.

Using innovative methods, Dr. Simmons worked to train Furr’s teachers offsite at places like local museums and HISD headquarters. She also focused on bonding with the student body and showing them that she was on their side. Keeping the Langston Hughes poem “What Happens to a Dream Differed” in mind daily, Dr. Simmons worked to provide a safe and positive environment for those students under her charge.

Dr. Simmons has lived a long and storied life, and according to Dr. Simmons, her memoir provides an account of the many eventful aspects of her life. In addition to her personal stories, Whispers of Hope also provides a glimpse into almost six decades of the Houston Independent School District’s operations from the perspective of a woman who held many different jobs throughout various sections of the district.

The book launch for Dr. Simmons’ book, Whispers of Hope: The Story of My Life, is at the Houston Museum of African American Culture located at 4807 Caroline St. Houston, TX, 77004, on Nov. 2, 2019, 5-7 p.m. The event is free and open to everyone. It will take place in the upstairs gallery space and free valet parking will be provided for everyone who attends. There will be small bites and wine served for the length of the event. (See more upcoming author events here.)

Dr. Bertie Simmons made a difference in the lives of countless students through her innovative management style, her willingness to challenge the status quo and her decision to invest time and effort in educating those that the rest of the city had forgotten. Grateful for her devotion and tireless work, several students whose lives she transformed are speaking at her book launch about her impact on their lives. Dr. Simmons will also be signing her books, which will be available for purchase at the event.