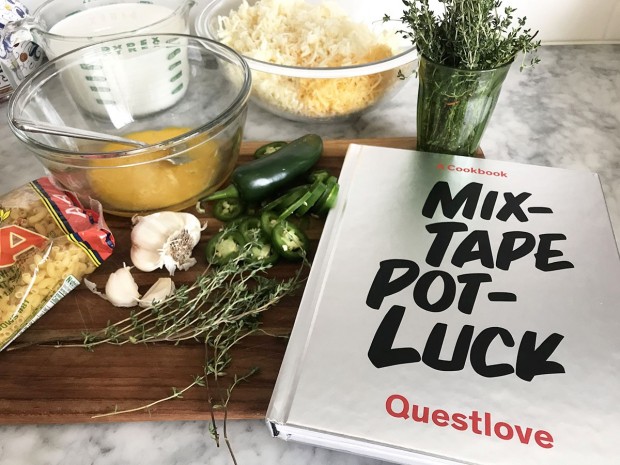 Questlove's clever combination of a potluck style dinner party and the mixtape to go with it combine to create a unique and entertaining cookbook. (Photo: Andria Frankfort)

Last month, Andria Frankfort and I enjoyed collaborating on a cookbook review and recipe testing from that cookbook so we are joining forces again. This week we are highlighting Mixtape Potluck: A Dinner Party for Friends, Their Recipes, and the Songs They Inspire by Questlove.

Questlove is the leader and co-founder of the band The Roots, the in-house band for The Tonight Show Starring Jimmy Fallon. By his own admission, he is not a cook himself; instead he regularly hosts food salons where he hires famous chefs to cook for his guests. However, according to Questlove “[g]uests are always telling me that they have a super-special secret recipe somewhere in their family, an amazing shrimp stew or vegetarian lasagna, and that they have to make it for me sometime.” So he decided to create a cookbook that evoked a potluck-style dinner party where the guests cook or create their own recipes at the gathering.

To coordinate with this potluck idea, his love of music motivated him to choose a song for each guest/contributor to inspire that individual to cook. He did not choose a song that would direct that person to make a certain dish but instead it “would be a song suggested to [him] by the people cooking, by what [he] knew of them and their creative lives.” The combination of the potluck idea and the mixtape idea produced Mixtape Potluck – a cookbook with recipes by his various friends and contributors and inspired by his mixtape selections.

Questlove’s cookbook is eclectic, unique, and so entertaining to peruse. Martha Stewart writes the introduction, and a wide variety of people furnish recipes including Natalie Portman, Jimmy Fallon, Q-TIP, Jessica Seinfeld, Amy Poehler and Gabrielle Union. His full guest list (the contributors) is provided at the front of the cookbook, and the ultimate mixtape created by assigning each guest a song is contained at the back of the book and is entitled the Ultimate Dinner Party Playlist. According to Questlove, this playlist is perfect for any dinner party, and he suggests that the “next time you have a dinner party, play this and this alone.”

As a music lover, I reveled in his song selections and reading about the reasons why he chose a particular track for each person, which he explains in a sidebar to each recipe. The chosen musicians range from Luther Vandross to the Ohio Players to Rosemary Clooney to the Beach Boys; it is a widely diverse and varied playlist. Even an old favorite of mine, In the Year 2525 by Zager and Evans, is included (thanks to Questlove this song is now on a continual loop in my head).

His contributors are artists, chefs, actors, and other friends. I am familiar with many of them, but my one complaint about the cookbook is that the individuals do not have any biographical information included by their names. Occasionally, Questlove references a contributor’s profession or other information about him or her, but I had to Google to learn more about a number of them. A quick summary of each person’s profession would provide better context for readers.

Mixtape Potluck: A Dinner Party for Friends, Their Recipes, and the Songs They Inspire is easily the most engaging cookbook that I have read. From the clever concept to the successful implementation of that concept, the cookbook is both a delight to read and is full of recipes that cooks of any skill will enjoy trying.

In his introduction, Questlove asks people who are inspired to put together their own Mixtape Potlucks and who choose to post about it on social media to use the hashtag #MixtapePotluck so that he can check out the results. Mixtape Potluck: A Dinner Party for Friends, Their Recipes, and the Songs They Inspire comes out next Tuesday, Oct. 15.  If you like to cook or love music, this cookbook is for you; it will also make a great gift for the foodie or music lover in your life.

I received this cookbook through my participation in the ABRAMS Dinner Party, a genius promotion strategy created by the publisher where they send out cookbooks to influencers and ask for their thoughts on these books.

Editor’s Note: See Back Porch Table by Andria Frankfort this week for a recipe from Questlove’s Mixtape Potluck: A Dinner Party for Friends, Their Recipes, and the Songs They Inspire.