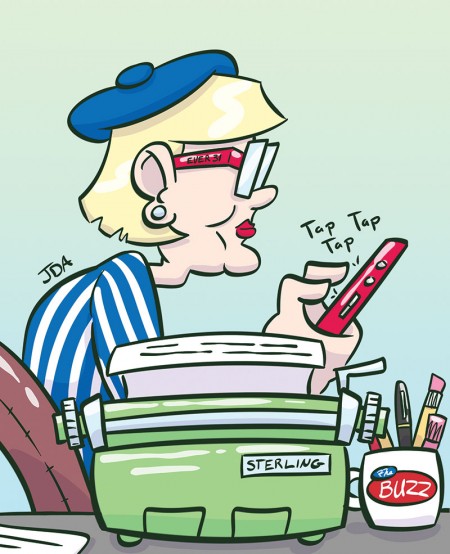 TIMES ARE CHANGING From cell phones to movie prices, computers to the internet, changes in the past century have transformed the way we live our lives. (Illustration: behance.net/runamokstudios)

I can’t get on Facebook because I don’t want my grandmother stalking me.”

That’s the reason one 30-something woman gave recently for declining to join a private Facebook group composed of colleagues from around the country. That seems odd: Weren’t social media and all things high-tech interesting only to the younger generations?

The answer is no. Some 67 percent of people aged 65 and older are online, and 81 percent of that group (in households making $75,000 or more) own smartphones. How is this possible when 65 years ago you didn’t even have your own telephone line, much less your own tiny, portable phone?

“Not only weren’t there cell phones,” remembers my mom, Phyllis Milstein, “but when we were small there were party lines. You’d pick up the phone to make a call, and someone else might be talking on the line, so you’d have to wait until the line was free.” The phones she was talking about were plugged into walls, their receivers tethered with cords. “And,” she says, “we used phones that dialed!”

The changes in technology that my mom’s generation have seen over the course of their lives is nothing short of astounding. If my generation think that getting used to cellphones (remember the giant boxes we plugged into the car cigarette lighter?) and smartphones and social media has been a steep learning curve, we’ve got nothing on hers.

“We were the first family in our neighborhood to have a TV,” she says.

“And now with streaming, TV is going away,” my dad, Bernie Milstein, chimes in.

“Everyone came to our house to watch Milton Berle and The Ed Sullivan Show,” Mom says. “When I came home from school every afternoon, we watched American Bandstand. My daddy got a screen that was supposed to make our picture color, but all it did was make red and green and blue streaks.”

Now, my mom is on Facebook connecting with friends and family across the country, all in vivid color, on a screen that fits cordlessly into her purse.

Advances in technology have permeated every aspect of our lives. Lee Mountain, author of over 100 books and professor of reading and language arts education at the University of Houston, says, “I fondly remember my typewriter. It was a clanky old thing that I wish I still had.” Even still, Lee made the transition to computers gracefully.

“It was gradual,” she says. “At first, I would draft something on paper. Then I would take the paper and carry it to the computer, and then I would sit at the computer and either type what I had written or use that as a step in a revision.” Before that, though, Lee remembers another change: electric typewriters. “I was fascinated and delighted to be able to correct myself,” she says. “I can’t tell you the number of years of white out and tearing up the page and starting over. It became so much more pleasant and easy.”

At 88, Lee is a full-time professor at UH. She’s even offering some of her courses online, progressing along with the school. “I was a teacher and writer all my life,” she says, “and I really like the face-to-face classroom. After lots of years of textbooks behind me and comfort with knowing what I was doing, I had to put my coursework in a different format. It was a hard transition, but it worked! That’s a very exciting moment.”

Maryann Tebbe recently co-founded the Community for Conscious Aging, a group providing programs that encourage people to age with vitality, purpose and meaning. Maryann says the connectedness of the world is a huge change. “We now have the ability to experience things at the tips of our fingers via a keyboard,” she says, “and that enables us to think from a broader and more global perspective.”

Technology is big, but it’s not the only thing that’s changed. Harry Rosenthal, a pediatrician, remembers going to the movies for nine cents. No, that’s not a typo: He doesn’t remember nine dollars (although many of us do), he remembers nine pennies. “Not only that,” he says, “we were 12 years old, and we’d take the bus from the Heights, where we lived, all the way downtown to the movie. And I bet we didn’t spend more than 50 cents total.”

Not only can’t today’s 12 year olds go to the movies for less than 25 dollars, but many of us won’t let them go to the theater alone, much less ride a bus across the city to get there – with no parents supervising.

Which puts the kids back at home, connecting virtually to each other and the world on their tiny screens.