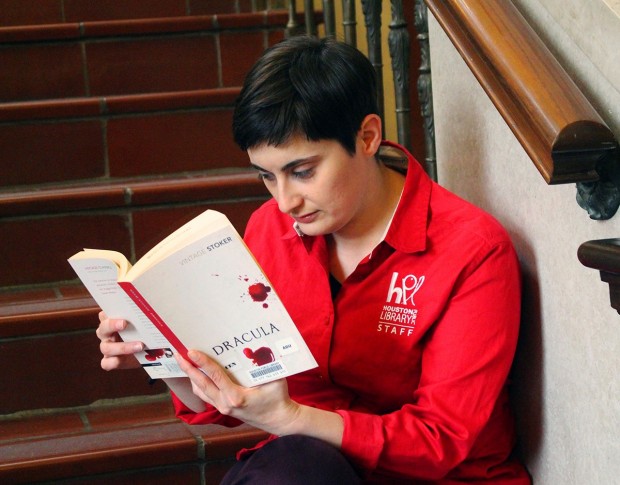 Savannah Dorsett from Houston Public Library recommends epistolary novels, books written as a series of documents such as letters, diary entries, or newspaper clippings, ranging from Dracula to The Martian and Princess Diaries.

Dear Reader...Here are some titles worth checking out!

Greetings! Quick question: What do the books Bridget Jones’ Diary, The Color Purple and The Guernsey Literary and Potato Peel Society have in common? Besides the fact that they were all eventually turned into movies - they’re all epistolary novels! What’s an epistolary novel, you ask? These are works that are written as a series of documents which can include but are not limited to letters, diary entries, or newspaper clippings. They also happen to be one of my particular favorite subgenres in literature. Partly because epistolary is just a fun word to say but mostly due to the deeply personal nature- - someone pouring their heart out in a diary versus the more distant third person narrator, and how creative they are in terms of playing with format and point of view. Regardless of your preferred genre, I assure you there’s something for you. Epistles for everyone!

Dracula by Bram Stoker: This Gothic horror classic is cleverly framed using mostly diary entries from the assembled team of vampire hunters that includes super genius Dr. Abraham Van Helsing, his protegee Dr. John Seward, and husband and wife Jonathan and Mina Harker - who are totally couple goals as not even a slight brush with vampirism stands in the way of their love and support for each other. Details not directly witnessed or known by the main characters are cleverly shown in other writings including newspaper clippings and telegrams. The epistolary structure is wonderfully used to keep the plot moving at a brisk pace and builds dramatic tension as each character is only able to react to their own knowledge or experiences. It’s not until the parties meet up and compare notes that the true scope of the evil, they are battling is realized. And then the hunt is on! A modern horror take on the epistolary novel is Max Brooks’ World War Z: An Oral History of the Zombie War in which multiple survivors of a worldwide zombie apocalypse are interviewed.

The mystery/thriller genre is another that is well represented within epistolary novels. Wilkie Collins’ The Moonstone is recognized as one of the first ever works of detective fiction, and established many of the early “ground rules” of the genre with the use of red herrings, a final plot twist at the end, the least likely suspect as the culprit and the bumbling local police being dazzled by the genius of the private detective. The story is shaped around the writings and perspectives of multiple characters from a variety of backgrounds and social classes - thus there are different nuances to what they see and hear, and they all have their own motives for how they choose to frame events. The reader is kept guessing as much as the detective and it’s no wonder the book was a sensation at its publication in 1860.

A modern mystery that makes use of the epistolary structure is Ruth Ware’s The Turn of the Key, published just this year. An homage to Henry James’ The Turn of the Screw, the protagonist is a woman named Rowan Caine who thinks she’s landed the perfect nanny gig, but she ends up in a creepy possibly haunted house, her charges are less than the model children she was promised and now she’s imprisoned suspected of murder. She insists she’s guilty of many things - just not the crime she’s accused of. How she ended up here is detailed in various letters to her lawyer. But of course, the question remains, if she freely admits that she’s a liar, how much of her story can be taken at face value? Oooh, epistolary novel and an unreliable narrator? Two of my favorite literary tropes in one!

Not a fan or horror or suspense? The deeply personal nature of the epistolary novel also lends itself well to coming-of-age stories as characters pour out their hearts to either a loved one or in a diary. Some of my personal favorites include Daddy Long-legs by Jean Webster in which poor orphan Jerusha “Judy” Abbot writes of her experiences at college to her mysterious benefactor and I Capture the Castle with narrator Cassandra Mortmain detailing in her journal the going-ons of her eccentric family and the chaos that ensues at the arrival of wealthy new neighbors - complete with two handsome brothers. Meg Cabot’s The Princess Diaries series is a modern take with high schooler Mia Thermopolis dealing with best friend drama, dating, her mother’s remarriage and, oh yes, the fact that she’s European royalty. Despite the different time periods (Daddy Long-Legs takes place at the turn of the 20th century, I Capture the Castle in the 1930s and the Princess Diaries series ran for 10 books starting in 2000), the books all share common themes of the giddy rush of first love, new friendships, a deeper understanding of one’s self and also an embarrassing moment or two.

You may be reading this and saying to yourself “Who has time nowadays for handwritten letters or keeping a detailed journal, how realistic is any of this?” Well, there are epistolary novels for you too! There are several recent epistolary works that use emails, lists, text messages, and all the other mundane ephemera we write every day and completely take for granted. Wonderful examples include the novel The Flatshare by Beth O’Leary in which two roommates who never see each other (she works days and he works nights) communicate via Post-It notes and slowly fall in love, Dear Committee Members by Julie Schumacher in which a beleaguered liberal arts professor works through his life’s frustrations via increasingly passive-aggressive recommendation letters he’s pressured to write and When You Read This by Mary Adkins, a novel told entirely via emails, text messages and blog posts about the aftermath of a young woman’s sudden death from cancer and the fit and starts efforts of her loved ones to move on and honor her dying wish. Believe it or not, even Andy Weir’s science fiction novel The Martian qualifies as an epistolary novel with the protagonist, an astronaut from the year 2035 stranded in space, detailing his efforts to survive through a video diary. A long way perhaps from the 19th century world of Wilkie Collins but it just goes to show how the epistolary novel is constantly reinventing itself.

And if you still can’t find something you want to read - ask your friendly neighborhood librarian! Houston Public Library offers personalized reading suggestions via email or you can book a one-on-one appointment with us to find your next great title!