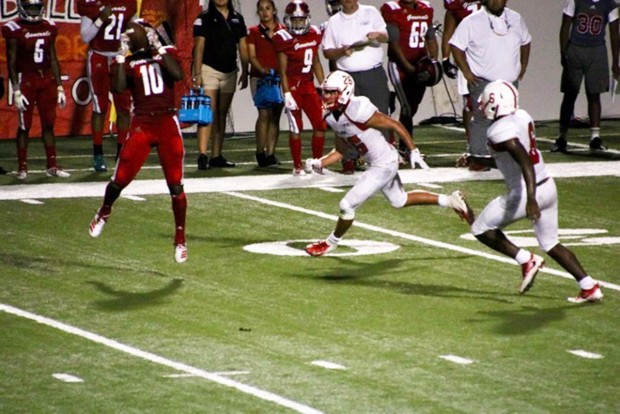 A team of red and white wins a playoff spot under the Friday night lights.

The Bellaire Cardinals football team wiped the sweat from their faces and raced toward the 50-yard line to celebrate their win. It was a flurry of jumping and screaming as players became a giant mass ebbing and flowing with the chants of the crowd. The Cardinals secured a playoff spot, with a 52-28 over Heights High School, an outrageous thought at the beginning of the season.

“It felt amazing to clinch a playoff spot,” junior Walter Truitt, varsity safety, said. “All the work we put it in to get where we are makes this moment special.”

The team managed to reverse an abysmal 3-3 district record last year into a surprising 5-1 district record after the win over Heights High School. The playoff spot was clinched, but more importantly second place which will allow the Cardinals to play a lower-ranked team in the first playoff round.

The team’s journey to reach this moment was not without its challenges. Due to the construction of Bellaire’s brand new school building, the Cardinals had their football field destroyed in the 2018-2019 school year. The team traveled to Butler stadium every day to practice. Coach Coons changed practice from the afternoon to the morning in order to reach Butler stadium. Weary eyed players would get up before dawn and trudge to school every day for football practice, and work out in the morning dew.

“I think what makes this team special is working hard,” junior Elijah Costa, varsity kicker, said.  “No other team has to wake up before dawn and put in the work we do, no matter how tired we are.”

Bellaire will enter the playoffs riding high on the momentum of their two-game win streak. Their defense has been vital to Bellaire’s turnaround with the team having the highest turnover creation in the district.

The playoff game is in two weeks and Bellaire’s players will come in well-rested with a bye week right before the big game. Before then the players will go back to the wet, dew filled fields and push through the ever-present pain and go back to work. The players practice hard day in and day out to get the result they strive for: winning. The players feel euphoria and pride in seeing all their hard work lead to something, perhaps even something not previously considered, like  an extended playoff run.

None of the players, when asked, will speak on their playoff chances. They practice the mentality that got them this far: focusing on one game at a time.