An Interview with Fiona Davis: A Focus on Historical Buildings in New York City 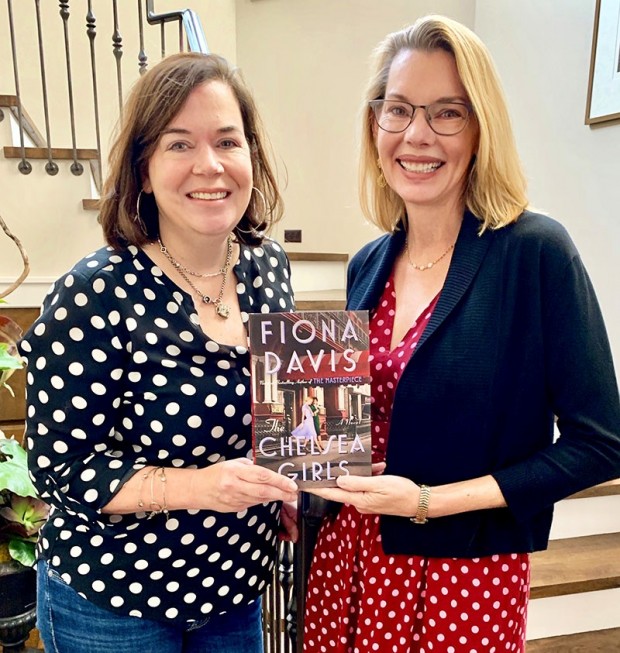 The Conversations from a Page crowd was thoroughly entertained by Fiona Davis and her stories about historic NYC buildings.

I am frequently asked to name my favorite or “must read” authors, and Fiona Davis is always at the top of my list. Fiona writes historical fiction and chooses an iconic, historic building in New York City to serve as the anchor for each book. Her first book, The Dollhouse, is set at the Barbizon Hotel; her second, The Address, takes place at the Dakota; her third book, The Masterpiece, focuses on Grand Central Terminal; and her latest novel, The Chelsea Girls, centers around the Chelsea Hotel.

I recently hosted Fiona Davis and Julie Satow (author of The Plaza: The Secret Life of America’s Most Famous Hotel) for a Conversations from a Page event. The two authors paired well together, and the attendees were treated to a lively discussion about The Plaza, the Chelsea Hotel and the famous and notorious individuals who resided at and visited both hotels.

While Fiona was here, I interviewed her about both The Chelsea Girls and her life as an author. I thoroughly enjoyed hearing her answers and hope you will too.

What inspired you to start writing?

I’d been working as a journalist for a number of years and came across a non-fiction story idea that I really wanted to write: A profile of the long-time residents of the former Barbizon Hotel for Women, which had been turned into a condo. I wanted to know what the older women who’d been living there for decades thought about the new occupants – a story of old and new New York. The more I dug into it, the more I decided that it would make a fun novel, and that became The Dollhouse.

How long have you been writing?

I started writing The Dollhouse in my late 40s and published it a couple of years later. Since then, I’ve released a book a year and am having the time of my life. I tell everyone I know that it’s okay to change things up career-wise every 10 years, to take a risk. I was an actress, then a journalist, and now I write historical fiction, and each choice eventually led me to this point.

What comes first - the plot or the characters?

I do a lot of research into the history of the building where the story will take place and let that feed both the plot and the characters. For The Address, which takes place at the Dakota apartment house (where John Lennon was shot), I was fascinated by what it was like when it first opened in 1884, when that part of New York City was just swamps and shanties. So I decided to write it from the housekeeper’s point of view and have her fall in love with one of the architects who was building it. Suddenly I had plot and characters ready to go.

How do you do research for your books?

Being a journalist, I like to get out and explore the landmark buildings I’m writing about and interview people face-to-face. For The Chelsea Girls, I met an actress who had lived through the McCarthy era in New York, and she provided the inspiration for the character of Hazel. I also talk to architectural historians and other experts and really try to get a solid understanding of time and place.

What was the highlight of writing The Chelsea Girls?

With The Chelsea Girls, I really enjoyed writing about the process of mounting a play on Broadway, as I was lucky enough to have that experience when I first came to New York as an actress. I was very involved with a small theater company, and one year one of our shows moved to Broadway and was nominated for a Tony. What’s really nice is we’re all still close friends today.

You bet. I’m writing a book set at the New York Public Library called The Lions of Fifth Avenue. During my research, I learned that the library’s superintendent lived in a seven-room apartment deep inside the library with his family when it was first built. The perfect setting!

According to my cousins, one of our ancestors was the butler to Henry VIII. I’d love to know what his life was like…