The Life of a Drill Team Dancer: A Texas Tradition 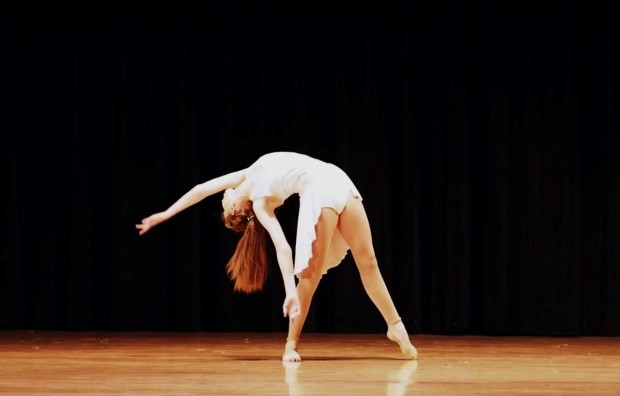 Claire Claypool, a junior at Bellaire High School, dancing her solo at a dance competition.

She’s never missed a single football game since she entered high school. Even through the early summer games under the blinding Texas sun that dries your throat like there’s cotton stuffed in it, and through the mid-cold-front games that freeze up the air and impale your lungs with every breath, she’s been there for all.

It’s a Friday night in October. She goes home to put on her jazz pants, red sparkle top and gemstone earrings. Her dad drives her to Butler Stadium: in the trunk of the car are her duffle bag and red stadium chair.

She steps out of the car, the gravel of the parking lot crunching under her black kick shoes. It is a routine she has gotten used to, but today is especially important: they are playing Lamar, the rival school.

A junior at Bellaire High School, Claire Claypool dances on the Bellaire Belles drill team. Claypool is one of four dance officers. In her third year on varsity, she sports her wind-breaker jacket glammed up with sequins and embroidery that spell the words “Lieutenant Colonel.”

“I spend three hours a day during the week at practice,” Claypool said. “It is a lot of commitment, but the reward of watching the dance come together outweighs all late-night practices.”

It is almost a Bellaire tradition to lose the Lamar game every year – now 38 years and counting – but there is always a nervous excitement among the drill team. The student section is densely packed on both sides.

“The game was really lively,” Claypool said. “We performed a kick routine to Sweet Caroline. There were a lot of people in the stands. We got booed when we walked to the Lamar side, and our side booed the Lamar drill team.”

Practices for football season began late July per usual. The Belles dance during halftime at all 10 varsity games every year, and the duty of the Lieutenant Colonel is to not only assist in leading the varsity team, but also the junior varsity dancers (72 girls in total), so there is not a second to rest for Claypool on Friday nights, even in the bleachers.

But football season does not last all year. Packing the kick shoes, stand chairs and cow bells late November, the team begins to prepare for competition season. The squeaking of gym floors and blistering of toes mean that the soloists are hard at work. Claypool choreographs her own solo routine every year.

“I just improvise to songs and keep improvising until I do something that I like,” Claypool said. “And then, I start building off of that until I have a whole dance.”

It doesn’t come easy. Dancers choose their solo songs months before the first competition and work to perfect it up until the moment they walk before the judges. Along with their solos, drill team dancers must also work on their team routines. The varsity team usually dances a kick, pom and jazz routine. The team attends one solo competition in the winter and two team competitions in the spring.

“I practice two or three hours a week for a month or two leading up to the competition,” Claypool said. “It’s really hard to sleep the night before the competition and I try not to think about it.”

Dancers are judged for their technique, difficulty of dance, choreography and showmanship.

“I feel really unsure and anxious until I start dancing,” Claypool said. “But when I walk onstage, I forget my anxiety completely and just dance.”

While doing all of this, Claypool also balances a rigorous AP course load. She has learned to overcome  the challenges of being a drill team dancer along with the stress of being a high school junior.

“The day after competition, everyone is really sore and tired because it’s 12 or more straight hours of dancing. You don’t get much rest but it’s worth it,” Claypool said. “Sometimes when the team is lacking motivation, practices goes on for longer, which means that I usually have to stay up really late doing homework. I try to find time during the school day to do my work so I don't have much to do after school.”

Despite all the pressure, Claypool still chose to do a solo this year.

“I partially do it because it's part of the requirement to try out for officer,” Claypool said. “But it’s also a fun way to challenge myself and to promote growth in my dance abilities.”

Although on the field and stage, dancers wear their perfect smiles and bright-red lipstick, it takes more than just glitter and make-up to be a drill team dancer. Through the rain games and packed Lamar games, winter gym practices and 5 a.m. competition mornings, she must be there for them all.