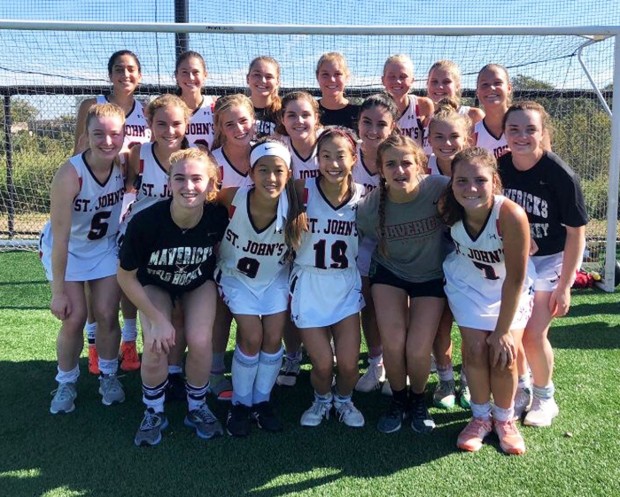 With only 30 minutes left until game time, the St. John’s School Maverick Varsity Field Hockey team frantically hurried towards the fields after leaving the airport moments before.

The 2018 Maverick Varsity Field Hockey team won an SPC championship and was ranked fifth in the West/Midwest region last season. Due to their ranking from the previous season, SJS received an invitation to attend the invitational and played against The Hill School from Pennsylvania, Pingree School from Massachusetts and Greenwich Academy from Connecticut.

The team’s original plan was to take a flight early Friday, Sept. 20 play against their first team, The Hill School, at 5 p.m. that same night. Due to Tropical Storm Imelda, George Bush Continental Airport shut down on Thursday, Sept. 19, and the team’s early morning Friday flight got cancelled.

Despite the unexpected weather and flight cancellation, the coaches and parents managed to get all the players up to Pennsylvania, arriving in the state just thirty minutes before their first game. Even though the Mavericks ended up losing to this Pennsylvania team, they believe that the tough competition allowed them to improve as a whole and gain confidence.

On the other hand, the Mavericks defeated the Pingree School with a 4-1 win.

“Naturally, I was disappointed with losing, which is just my competitive nature, but in retrospect I am very proud of our play and our showing because every game was hard fought,” junior Piper Edwards said.

This invitational allowed the Mavericks to compete against the top teams from across the country, and thus grow and improve as a whole.

“I think we have great team chemistry both on and off the field,” freshman Maddie Kim said. “I think when you spend that much time together, practicing, traveling, and competing, you can’t help but grow closer. You become more than just teammates, you become friends.