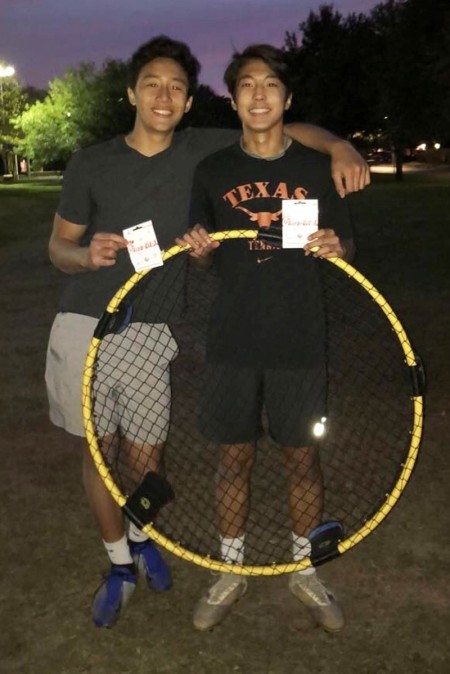 (from left) Jamey Duong and Ricky Kai with winning prizes in hand.

The satisfying swoosh of the ball cuts through the air as it bounces onto the net. Someone then darts to get the ball as it flies back up, again hitting it to the net.

This fast-paced game is called Spikeball, and it is a sensation that has taken over students at Bellaire High School. Every Thursday, a large group of students congregate in the gym where they spend the entire one hour lunch period playing this intense rally.

Perhaps its convenience, with its foldable and small net, has led to its popularity. Or maybe, the easy rules led to its rise. Either way, Spikeball has gone from a fun backyard game to a serious sport amongst Bellaire students.

On Saturday, Nov. 17, the Spikeball Club sponsored a tournament at Meyers Park. The tournament featured two categories: intermediate and advanced. Teams played in groups of two in both brackets to win the ultimate prize: a 15 dollar Chick-fil-A gift card.

Juniors Bryson On and Patrick Nguyen won the intermediate bracket. The win reflects weekends spent in Evelyn’s Park and lunches spent in the gym playing the game.

“I play Spikeball every other day and during the weekends,” On said. “There were a lot more people that showed up than I expected, but at the end of the day we took home the win.”

The tournament gathered many Spikeball enthusiasts, some beginners while others devoted players.

“First we played four pool games to determine our seed in the bracket, and after that, they matched us up based on the points we got from winning,” On said. “Then, it was the elimination round, so if you lost you’d go to the loser’s round, and if you lost that, you were out of the tournament. We went undefeated.”

The Spikeball club has made Spikeball increasingly popular at the school. With a portable net and easy instructions, Spikeball has become more than just a game - it’s become a sport, and people are playing to win.