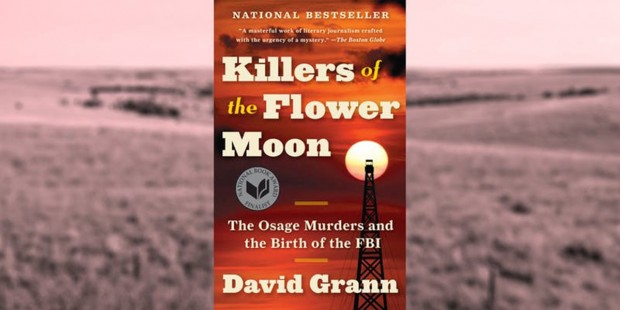 Alexandra Drake from Houston Public Library highlights The Killers of the Flower Moon.

Remember, way back, when you were introduced to the story of “the first Thanksgiving?” The saccharine story of two groups of people creating a new tradition based on love, acceptance, sharing and giving thanks? I grew up with this “based on a true story” version, as did many people, and in the spirit of annual celebrations full of warmth and appreciation, it isn’t so bad. Unfortunately, the actuality of bigotry, dehumanization and abuse of the Native American peoples continues to this day, which is why I would like to highlight The Killers of the Flower Moon this month.

It reads in a non-fiction narrative style, and explores the “reign of terror” during the 1920s-1930s in Oklahoma, perpetrated against the then extremely wealthy Osage Nation. This beautiful, terrifying story is presented in three parts: exploring the murders, investigations by the fledgling FBI, and modern-day analysis. We become acquainted with who, why and how hundreds of Osage were systematically, and often brutally, murdered for their “head rights,” oil monies that paid in the hundreds of thousands in those days.

So before, during or after indulging this Thanksgiving with friends and family, pick up a copy of this excellent book as a stark reminder to be thankful, help others and try to improve the lives of those under represented folks who need our support.

Periwinkle On The Move presented by White Oak Energy