With caring texts from a stranger 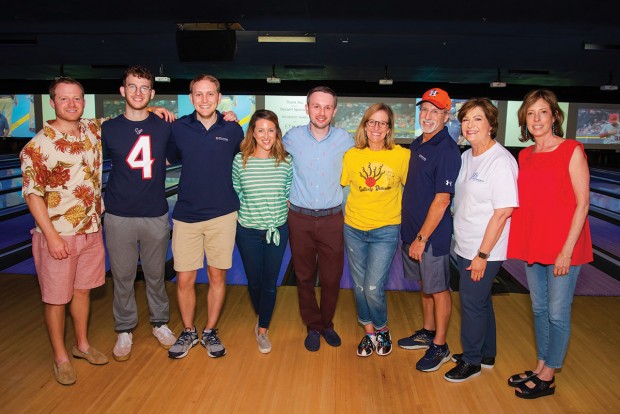 Six days after Eric Suhl died by suicide on Feb. 2, 2016, at 28 years old, his closest friends sat huddled together on the couch in the Suhl household in Meyerland, grappling with the loss of the guy who was the life of every party, but silently suffering.

“They couldn’t leave,” said Eric’s mother, Debra Suhl. “They sat in our house until 2 a.m. They’d sometimes stand up and say, ‘Okay, we better go,’ but then they’d all sit back down.”

For many of the 8-10 friends gathered, Eric’s passing was the first time they experienced the death of a loved one. That night, as they began the process of healing, an idea was born, to create a lasting organization in honor of Eric’s memory. That idea became a reality with the founding of the Eric M. Suhl Foundation soon after.

Within three months of Eric’s passing, the foundation had organized the inaugural Eric M. Suhl Memorial Golf Tournament, raising $25,000 to donate to the Crohn’s & Colitis Foundation.

Eric’s close friends – several of whom founded and still serve as board members of the foundation – knew Eric suffered from ulcerative colitis, an inflammatory bowel disease that required multiple surgeries and a constant shuffle in and out of emergency rooms. What many of his friends did not know, however, was the extent to which the disease caused Eric mental anguish and stress.

“I feel like I was the only person he could talk to,” said Debra, who suffers from the same hereditary disease. “But he didn’t want to upset me, so he didn’t share all of his feelings with me. He was determined not to let anyone know how bad it was, and that was a problem.”

While Debra can manage her colitis through daily medication, her son’s symptoms were more severe. After graduating from The University of Texas at Austin in 2009, Eric underwent a major surgery where doctors removed his diseased colon and built a new one called a “j-pouch.” The j-pouch, built to hold and pass solid waste, ultimately split, and Eric consequently developed sepsis, a life-threatening disease that increased his risk for infections. 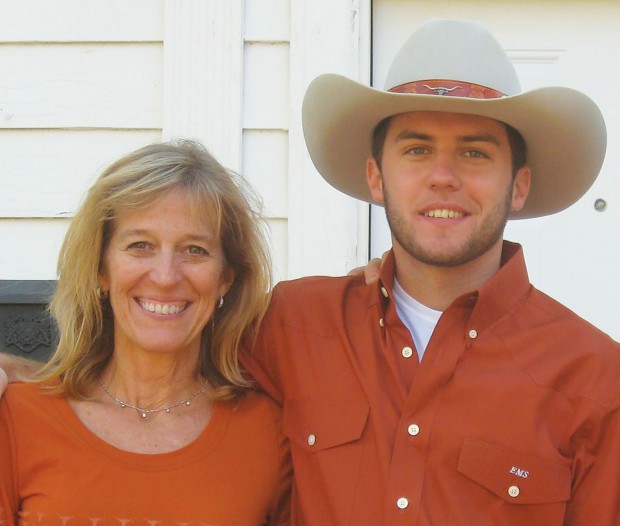 Eric Suhl shared a close relationship with his mom Debra.

While struggling with colitis and infections, Eric worked as a procurement manager, first at a company in Houston, then in Minneapolis and later in Tampa, where he died. All the while, he tried to maintain his normal routine. He was consistently upbeat, friends recall, and always ensured others had fun.

“He was the life of every party and always wanted to have a good time,” says one of Eric’s best friends, Eugene Tunitsky, who also serves on the board of the Eric M. Suhl Foundation. Eugene attended Lamar High School and UT with Eric.

When Eric lived in Minneapolis, most of his coworkers and friends had no idea he suffered from an autoimmune disorder. Debra recalls an incident when Eric was rushed to the emergency room due to an infection. He stayed there for nearly 36 hours, so he asked his friend Anne if she could come by his apartment to feed his dog Callie, who he often called his best friend.

“That was the first time Anne even knew,” says Debra, who heard about this incident from Eric months after the fact. “You talk about cancer and other illnesses, but stomach issues and diarrhea, that’s not something that people can sit around and talk about easily.”

The Eric. M. Suhl Foundation has traditionally supported those impacted with colitis, both through the annual charity golf tournament and through an endowed scholarship at UT, targeted towards students who struggle with, or have family affected by, colitis, Crohn’s or other chronic medical issues. Recently, though, the foundation has supported mental health initiatives too.

In 2018, the foundation donated money to Touching the Heart, a wellness program where high school seniors, college and graduate students and young professionals can opt to receive biweekly text messages with tips for stress reduction.

“We started off reaching out to kids leaving to go to college; that’s where we really see the anxiety and other mood disorders take hold,” said licensed clinical social worker Laurie Silver, who leads Touching the Heart. The program is run by Jewish Family Service, where Laurie serves as manager for mental health programs. “The idea is to create that connection and that resource as they leave to go to college.” 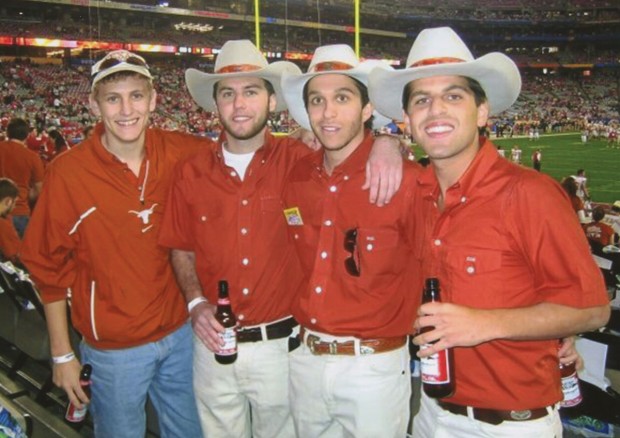 Eric (second from left) enjoys a University of Texas football game with friends (from left) Eric Horvitz, Brett Luskey and Jeff Magids, all of whom are founding members of the Eric M. Suhl Foundation.

The idea for Touching the Heart stems from research by Thomas Joiner, a leading suicidologist who was hired by the defense department to test whether contact from an anonymous person can enhance well-being. He designed a digital program of sending anonymous text messages to those in the military, where rates of suicide are high. The program was shown to reduce rates of depression and lower risk of suicide.

Touching the Heart launched last year and has expanded to include young professionals and high school seniors, in addition to students heading off to college. Those who sign up for the program receive a text message every other week from Laurie. The texts provide support during stressful times and offer tips for prioritizing one’s mental health.

“It sounds cheesy, but it helps you open up to someone who is not your family,” says Eugene.

When Debra heard about the program through an article in The Jewish Herald-Voice, she knew it was something she wanted the Eric M. Suhl Foundation to support.

“I think what Laurie is doing with Touching the Heart, it just opens a door to so many young people who may be going through what Eric went through,” Debra said. “I feel it’s so important to have someone out there to be able to open up to. The fact that it’s not a good friend or family member I think is even better because it can be easier to talk to someone you don’t know, and not face to face or by phone but by text.”

Recipients have the option of responding to the text, in which case Laurie immediately replies. If someone requests additional support, Laurie can provide help or connect them to mental health services at their college or university. 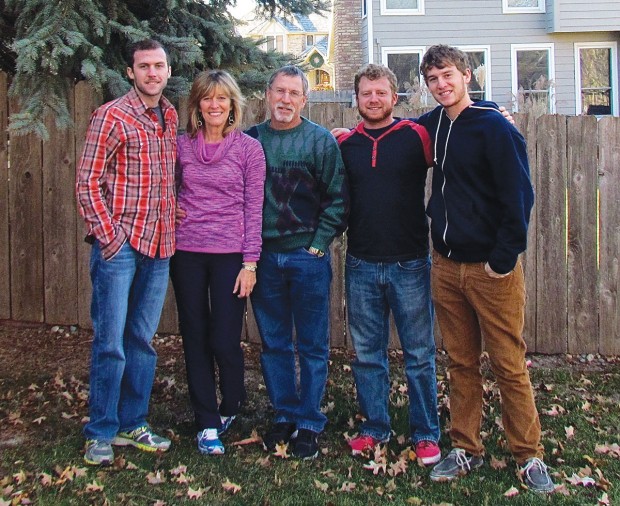 Eric (at left) grew up in Meyerland with parents Debra and Randy and brothers Kyle and Ryan.

Last year, after the board of the Eric Suhl Foundation voted to support Touching the Heart, they donated $20,000 to the program. This year, the foundation launched its first annual Bowl a Strike for Mental Health event in partnership with Jewish Family Service, which took place on Sept. 22. About 250 people attended, taking up 38 of the 39 bowling lanes at Bowlmor Lanes on Bunker Hill Road.

“Honestly, I didn’t expect the turnout to be as tremendous as it was,” said Debra, who attended along with her sons Kyle and Ryan and husband Randy. “I thought people would say ‘No, the football game is going to be on,’ or, ‘I’ve got something else going on and I’ve already made the donation, it’s okay if I don’t go.”

During the event, the foundation committed to donating $45,000 to Touching the Heart, using both the funds procured through the bowling event plus a portion of the money raised earlier this year through the golf tournament.

“It’s been a work of love,” said Eugene, who helped organize the bowling event. “Working for a foundation to donate money in Eric’s name and to create this program that hopefully will help people struggling silently. You wish that maybe [Eric] had this text program, or someone who he could talk to privately. Maybe it would have made a difference.”

Editor’s note: To sign up for Touching the Heart, visit mentalhealthletstalk.org/touching-the-heart/. If you have any questions, contact Laurie Silver at [email protected] or 713-542-5544.

Resources
• For information on the common warning signs of suicide and ways to help destigmatize and prevent death by suicide, visit the National Institute of Mental Health’s website at https://www.nimh.nih.gov/index.shtml
• Additional resources for survivors and friends and family can be found at speakingofsuicide.com.