A Trunkload of Love Letters: Life as 1950s Navy Sweethearts 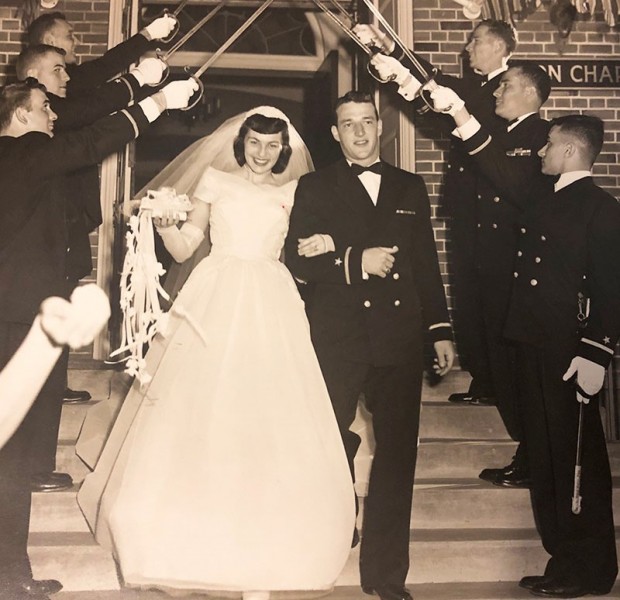 Newlyweds Teddi and Lieutenant JG Vic Vine are all smiles leaving the Pensacola Naval Air Station Chapel under an arch of swords following their marriage ceremony on March 7, 1953.

The exterior of the weathered black trunk, erratically battle-scarred with shipping labels to exotic (and not-so-exotic) locations creates an intriguing scavenger hunt puzzle to my father’s 30-year Navy career journey. The trunk currently sits unassumingly in the corner of our family’s den, camouflaged into a shabby chic table that holds shiny framed photos of smiling people much younger than the trunk - photos of the offspring of the trunk’s owner.

But like any good box, the real story lies inside. The scratchy gold tarnished latches have clung together over 60 years guarding the intimate love stories and secrets of my parents…quite a treasure since the trunk has outlived them both. I never knew the trunk existed until a few years after my father died in 2004. Thankfully, Cleary Vine, my dad’s second wife and a second mom to me, told me it had been in their attic for years and she thought I should have it.

My parents’ handwritten letters are dated from November 1951, when my parents first met while my dad was a midshipman at the Naval Academy and my mom lived in Philadelphia, until the 1970s when our family lived on Navy bases in Pensacola, Florida and Corpus Christi, Texas. My dad retired from the Navy in 1976 when I was in fourth grade. Looking through the box, it was wonderful to discover some of the stories my parents are unable to share today. 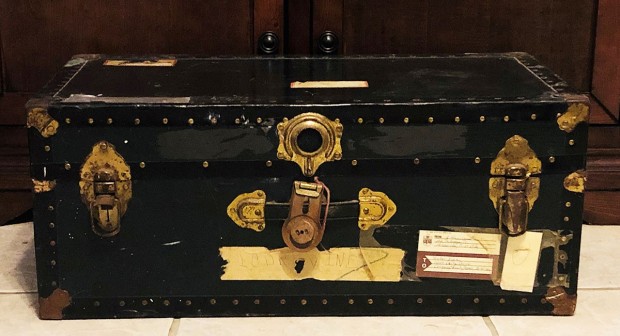 This trunk was given to Karen Vine Fuller after her father passed away. It held hundreds of love letters her parents had written to each other from 1951 until the '70s during her dad’s Navy travels.

I’m the youngest of three so I didn’t move quite as much as my older brother and sister, but even just in my first eight years of life, we lived in Charlottesville, Virginia, Coronado, California, Okinawa, Japan, Pensacola and Corpus Christi.

Being the youngest, I probably remember the least about our family’s history. My dad played football at the Naval Academy and he would talk about that, but not very much about being a pilot in the Navy or his military career.

And when you’re a kid, your parents are just your parents, right? It doesn’t seem to really matter what their job is. But the more I learn about veterans and people that served our country during the ‘50s, ‘60s and ‘70s or any era for that matter, I have begun to truly appreciate all that my father did and empathize with  how hard it must have been on my mom. Now that I am a mom, I can’t even imagine being a Navy wife and having to move every few years and having your husband gone a lot of time on aircraft carriers and other places they probably aren’t able to tell you.

I haven’t made it through the hundreds of letters in that trunk yet but so many of them hold clues to what it was like in the military. They also hold a reminder of what life was like before luxuries like computers and cell phones. 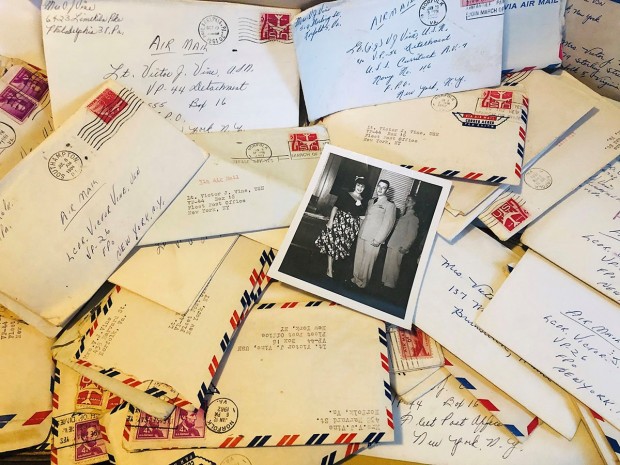 Some of the hundreds of letters written by Vic and Teddi Vine during times they had to live apart during Commander Vine’s Naval career.

By the time you get this letter, we will have had our phone conversation of tomorrow night and already I’ll be looking forward to next Sunday night so I can tell you that I love you again. Teddi

I was so happy today. I got all three of your letters at one time. Vic

I hope your flying is coming along good, Darling, and your studies aren’t too hard. You’re darned right I want you to be a good pilot and I know you will be. I have lots of faith in you. I know that flying is what you want to do and I want to do everything I can to help you because I know it will make you happy. Teddi

Hello, Angel. Your letters lifted me from the depths of despondency to the heights of happiness. You do write wonderful letters, darling. Vic

I’m so sorry that you won’t be home for Thanksgiving like we planned. Hopefully they won’t move back your return date another two weeks. Teddi

The kids were so happy to get your beautiful birthday cards you sent them. Teddi

I miss you so much I can’t stand it. Vic

If you only knew how much those wonderful letters of yours mean to me and how I hope you can keep them coming even if they have to be short ones.  Teddi

I’m here in Florida, and yet I’m with you in Philadelphia. I’m flying in an airplane and yet I’m wondering what you are doing at your job. Vic

Every so often I read a few of the letters, get a bit overwhelmed and then close the lid to the trunk and slide it back into its life of a nice conversational decoration piece in our den. Those framed photos of smiling family members that sit on top of the trunk have no idea of the stories of their grandparents and great-grandparents that lurk beneath them.

Thank you to my parents and all the veterans and their families that have sacrificed and continue to do so to serve their country. I look forward to discovering more about my parents’ naval careers… letter by letter.