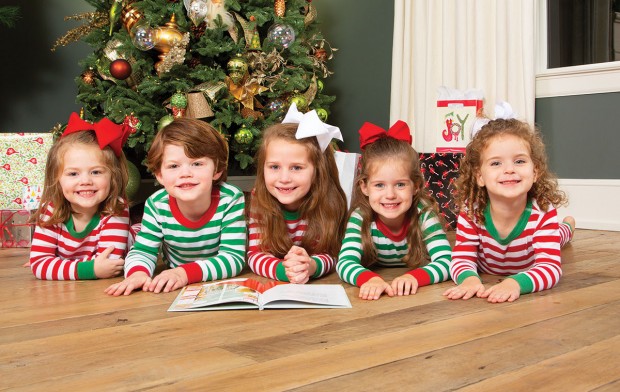 The McFarlane and Carter cousins begin every Christmas at grandfather "Bondieu" John Turner’s house. Pictured (from left) are Reese, Johnny and Poppy McFarlane and Mimi and Caroline Carter. (Photo: lawellphoto.com)

Louise Carter, a realtor and mom of 3-year-old twin girls, Mimi and Caroline, opens the shutters in her ranch-style home. It’s early, around 6 a.m. The morning dew is still on the grass, and the sun is barely peeping in.

It’s Christmas morning. Louise and her husband Park, who works in commercial real estate, have a small gift from Santa Claus ready for the girls to tear open. They all spend a quiet hour together, just the four of them, before heading out for a day of multiple stops with their Houston family members.

Before 8 a.m., they load the girls, in matching pajamas, in the car and head to Louise’s dad’s house. Her father, John Turner – whom the kids call “Bondieu” for his grandfather name, takes Christmas-morning traditions seriously. 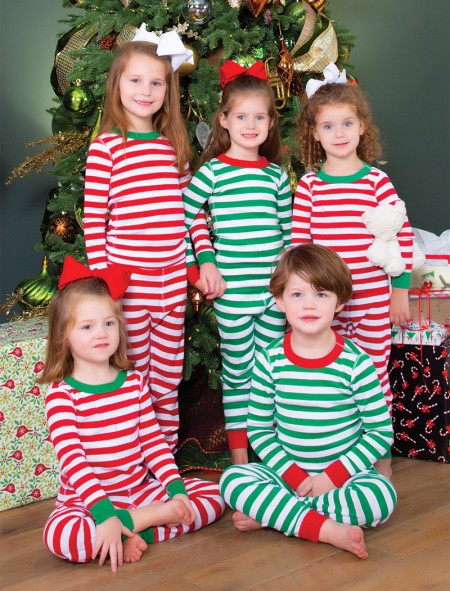 Louise, Park, Mimi and Caroline and Louise’s older sister, Leigh McFarlane, also a realtor, her husband Michael and their three children – 4-year-old twins Johnny and Reese and 6-year-old Poppy – rendezvous at his house to spend Christmas morning together, as they always have, all in matching pajamas.

Christmas-morning traditions are a big deal for the Turner family. John, whose mother Polly passed along her love of the special morning, has the house professionally decorated in early November each year. When the grandchildren arrive, John has them all wait in a room before they race together into the living room to open their gifts.

Louise says her own childhood Christmas mornings were similar. She and Leigh would wait up to hear Prancer’s bells jingling outside before bed, hardly able to sleep thinking about the magical celebration of Christmas the following morning. She loves that it continues today.

“Dad makes a big ceremony of Christmas morning for the kids,” said Louise. “He takes a video of the entire room, all the while shouting about all of the presents and teasing the kids as they anxiously await the opening of the doors.” He opens the doors and records the children running into the room. Their Christmas morning begins.

The only difference now, Louise says, is that they eat breakfast after opening gifts. Those were not Polly’s rules. “We always had to eat Christmas breakfast before we could open presents. This was strictly enforced by Polly. We are sparing our children from this tradition,” Louise said, laughing. 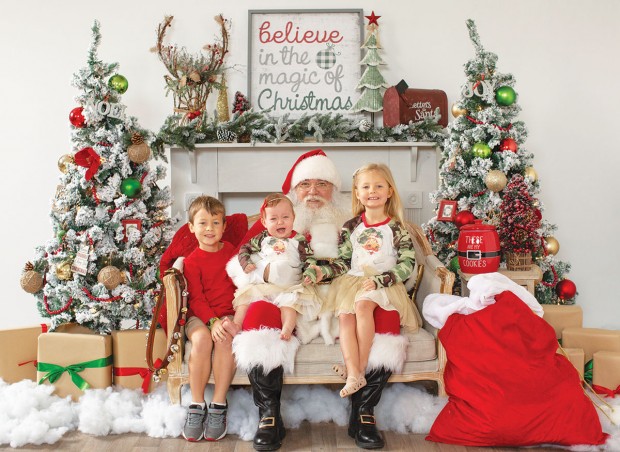 Reagan Griffith (not pictured) says his favorite Christmas-morning tradition is heading out to the yard with his children to watch them play with their new toys. Pictured are Lyle, Ruby, and Harper Griffith, posing with Santa last Christmas. (Photo: Maggie Lackey Photography)

Another Buzz family passing along special Christmas-morning traditions is the Griffith family, Christa and Reagan and their three kids – Lyle, 7, Harper, 5, and Ruby, 2.

Christa grew up celebrating mostly on Christmas Eve, attending midnight Catholic mass. Her mother would wake everyone up with the smell of bacon and eggs cooking on Christmas morning. They would eat breakfast and make the 3-hour drive to San Antonio to see her grandparents.

Her grandparents lived on a street in San Antonio that was known for over-the-top holiday decorations and lights. The family would brew hot chocolate and gather blankets. She would sit in her grandfather’s pickup truck and ride around to look at lights.

Christa and her husband Reagan are carrying on this tradition. The family loads up in their car to drive around town and find the most beautiful Christmas lights. They also attend several Christmas performances at various churches, not just their own, throughout the season.

The Griffiths start the season in November by letting their kids decorate their tree and help put up the outside decorations. They also visit Santa’s Wonderland, a Christmas village in College Station, every year – Christa has missed only one year since 2000.

Christa will always remember Christmas morning 2012 – their first Christmas as parents. “That was the first year we woke up with a newborn, and it was the start to this new journey with kids and Christmas,” she said.

“God had better plans for us,” said Christa. Christa was admitted to the hospital that fall for three months while pregnant with Ruby, placed on bedrest. “He decided to let her be born at 34 weeks [gestation], so now we don’t have to have a Christmas baby. Thank you, Jesus!” she said, laughing.