Don't be that customer 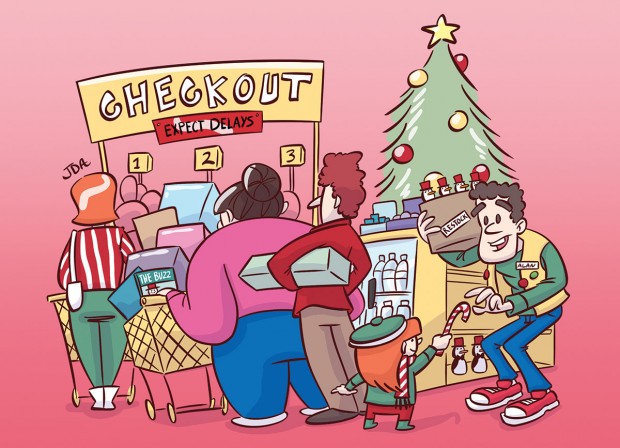 KINDNESS EVERY DAY The holidays are a great time to remember that a little kindness goes a long way. (Illustration: behance.net/runamokstudios)

Last holiday season, a local Starbucks barista says, a customer rushed in for a coffee before work. The busy staff took her order, and the customer waited. Apparently, the customer deemed the wait too long and the coffee unacceptable, because when she was handed the coffee, she threw the hot cup back at the barista and said, “You’ve made me late for work!”

Less terribly, many of us have asked grocery checkers or bank tellers how their days are going, and the response we hear is, “Thank you so much for asking. Most people don’t.”

During the holidays, we’re all about cheer and goodwill toward humankind. But sometimes, in the rush of the season, we can forget to include all humans in that intention.

Jo Rogers worked for 15 years at retail stores like BCBG, Seven for All Mankind, Restoration Hardware and Splendid, and she says that people would sometimes forget their manners. “When I was at Restoration Hardware, a client had some issues with some planters,” says Jo, who now works at The Buzz Magazines. “They weren’t the exact colors he thought he’d gotten. So we did an exchange, and he got new planters delivered. It was the same problem again. I tried to explain how they would weather, that the color would change. But he interrupted me to let me know that he was a doctor. I don’t know what I was supposed to do with that. Then he told me I needed to get smart. I told him I really wanted to help him, but please don’t speak down to me. It’s amazing that some people think it’s okay to speak to another person that way.

“People can go to the negative quickly. They’ll ask if we have something in the back. You’ll say, ‘No, we’re out of that,’ and they’ll ask us to check again. I’m not lying. I’m not being lazy. I want to sell you something.” Likewise, customers will challenge salespeople with their own bad behavior. Jo remembers an experience when, “I had already been called with a warning [about customers trying to return stolen clothes]. They came in, even had their kids with them. I went through the process, ran their drivers’ licenses, told them I couldn’t return the merchandise. They called me every name in the book, and I had to call the cops. I was worried about walking to my car that night.”

Leo Laredo, who now works in real estate, worked as a customer-service associate, manager and beauty consultant for almost five years at Walgreens. “There are some retail workers out there who are just looking to get a paycheck and go home,” he says. “But most of us really care, and we work hard to ensure that customers leave happy and want to come back.”

Leo says one of the worst things customers do on a daily basis is talk on their phone the whole time they’re in the store, including checkout, never making eye contact. “It’s dehumanizing,” he says. “The customer has the right to be treated with respect and kindness,” he says. “But so do we. I’ve always believed in the old adage, ‘Respect deserves respect.’”

So what can we do to be respectful customers, people retailers like to see walking through their doors?

“It’s so important to make a connection rather than just walking by,” Jo says. “It makes a more genuine interaction. I have had some really nice customers who have brought coffee or gift cards during the holidays, but those are few and far between.”

Leo says, “If someone says hello to you, say hello back,” referring to the clerks who say, “Welcome to Walgreens” to each customer entering the store. “The basic thing is just to respond kindly. Just a kind response will make someone feel at least they did their job well today.”

Also, he says, “learn someone’s name.” And then, “Go the extra mile. If you go out on Christmas day and get milk because Walgreens is open on Christmas day, maybe bring in a couple of cookies. I actually had a customer bring me a plate of Thanksgiving meal from their home. That’s going above and beyond. But even just a thank you is huge.”

Jo reminds us that during the holidays everyone is going to wait a little longer. “We really are trying, though,” she says. “I promise. Just be nice. It’s not any harder than that. Be respectful and realize everyone is doing the best they can.”

The Riot presents "Stand Up On The Spot" with Jeremiah Watkins