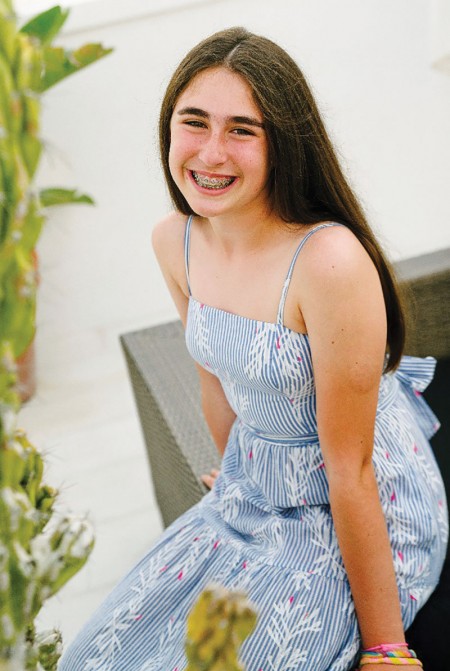 FINDING HER VOICE Manning Muller, an eighth grader at Duchesne Academy of the Sacred Heart, remembers when she tried out for Theatre Under the Stars.

I went into the audition shaking with fear. I had never done anything like this before, and I did not even know if I was good. I was around so many people who knew exactly what they were doing and where they were going. I just followed the leader because I was scared that if I showed weakness, they would eat me alive. So, I just acted like I knew what I was doing and went in.

The dance section of the audition had three parts: ballet, jazz and tap. I was good in ballet since I had been doing it for so long. But in jazz and tap I was kind of clueless. I had taken jazz before, but I was not amazing at it. In tap I was completely clueless, having never taken a class in my life. And Mrs. Andrea, the tap instructor, made us go one at a time, so I probably looked stupid while I was doing it too. I was around people who had taken years of tap and here I was, a girl stomping her feet trying to find the rhythm. In the end, I think that I did a mediocre job, but I was nervous for what was next.

It was time to go in for the second part of the audition, singing and acting. I went in even though I did not believe in myself. I went in and tried my best. At the end, everyone was clapping, and they seemed impressed. I felt so incredible that there was (almost) a literal ray of sunshine coming from me. I felt accomplished!

About a month later, this large envelope addressed to me came in the mail. It was addressed from TUTS, and I got excited. I got accepted into everything except tap (but honestly, I was expecting that).

It’s been two years since I went to the audition, and my life has completely changed. I have found my true voice, and I know that I can do this! I am so glad that I had the courage to do this, and my future self is forever grateful.