LIVE with Kelly and Ryan – and Our Very Own, Sarah Gibbs 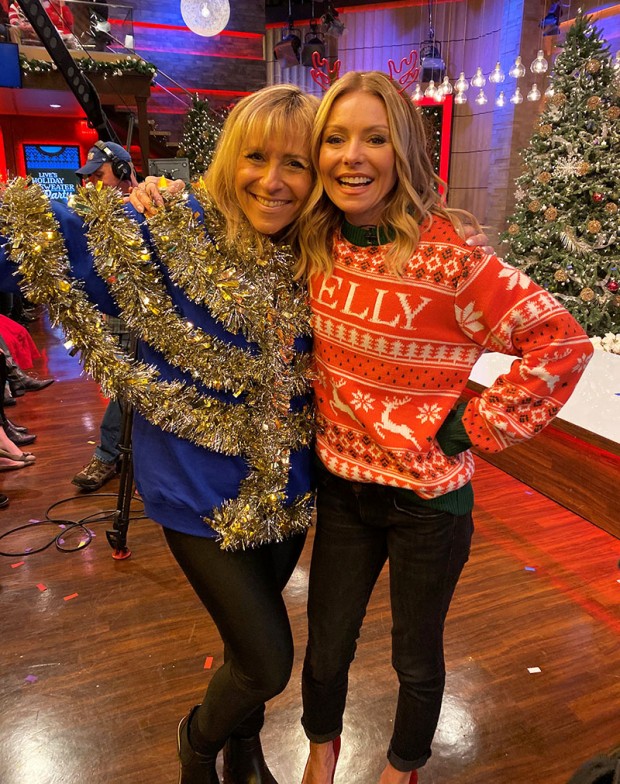 Sarah Gibbs snapped a photo with Kelly Ripa during the taping of the show, “Live with Ryan and Kelly.”

After two days of hitting up NYC landmarks like Chinatown, Staten Island and Broadway, Sarah Gibbs did something most New York tourists can only dream of: landing a spot on live television.

Sarah and two of her best friends, Bellaire residents Melissa Selzer and Shelley Sorkin, arrived in NYC on Sunday, Dec. 8. It was a last-minute girls trip planned only one month earlier mostly because Melissa had never been to the Big Apple. As soon as she scheduled the trip, Sarah, a friendly blonde who works in real estate, went online to sign up to attend a live taping – a hallmark of any visit to NYC. Sarah was disappointed when she ended up on several waitlists but thrilled two weeks later when she secured tickets to “Live with Kelly and Ryan,” a morning talk show with hosts Kelly Ripa and Ryan Seacrest.

“I got an email saying, ‘You have tickets to see “Live with Kelly and Ryan,” and it’s a special show. It’s a holiday party show, and you must wear a holiday sweater.’”

Naturally, the ladies immediately searched on Amazon and Etsy for holiday sweaters to order. Only these weren’t your traditional Christmas sweaters. They were instead bright blue and Hanukkah-themed.

“Because we’re Jewish, it didn’t even occur to us to buy a Christmas sweater,” Melissa said.

When the three women showed up at ABC Studios early in the morning on the day of the taping, Tuesday, Dec. 10, they drew attention, flashing blue among a sea of red and green. A producer was scoping out the audience and soon approached Sarah. He took in her bold sweater: bright blue with a flashy menorah constructed from gold tinsel material – the same metallic garland used to decorate Christmas trees. 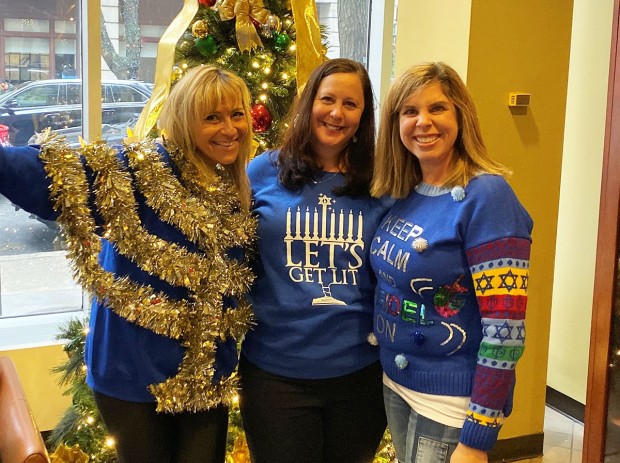 Sarah Gibbs and her friends Melissa Selzer and Shelley Sorkin (from left) show off the Hanukkah sweaters they wore during the taping of “Live with Kelly and Ryan.”

“It was crazy,” Sarah said of her choice of sweater, purchased on etsy.com “Just wild.”

The producer noted Sarah’s name on a sheet of paper and snapped a photo of her. While Sarah had an inkling this indicated she was in the running for “best holiday sweater,” she only knew for certain when a producer escorted her and her two friends to the front row of the audience and then told Sarah, “You are in the finals.”

As Sarah shares the story, it’s clear the entire taping experience was surreal. During the taping, Sarah was in the Green Room backstage, along with four other contestants for best holiday sweater. She watched the taping unfold, occasionally seeing Melissa and Shelley clapping from their front-row seats and watching Kelly Ripa appear in a different holiday sweater after every commercial break.

Finally, it was time for Sarah and the other contestants to go on stage.

“Maybe some people are more natural; I was very nervous about it,” Sarah says. “I thought, what the heck was I doing. I wore a crazy sweater that most people would never actually wear. I wore it on national TV. And I walked on somewhat of a runway. But you know what, it was fun.” 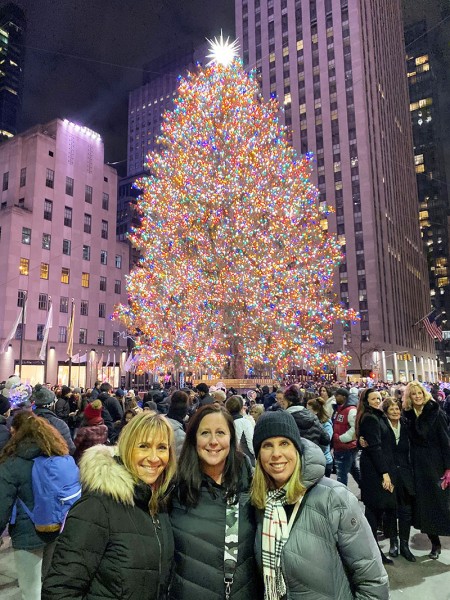 During their girls-trip to NYC, these friends enjoyed NYC highlights including checking out the famous Rockefeller Center Christmas Tree.

Melissa and Shelley caught the moment on camera. Sarah walks onto the runway, her arms widespread, her eyes beaming as she proudly displays the golden menorah.

“It was cool to say we came here, and we were celebrating Hanukkah,” Sarah says.  “We were the only three Jews in the whole audience.”

During a commercial break, Sarah discovered she shares a birthday with Ryan Seacrest – Christmas Eve, ironically. And she and Shelley even got a chance to chat with Kelly.

Though Shelley and Melissa had front-row seats to the taping, they’re still excited to see the show air on television on Friday, Dec. 20. “I have my DVR set up and everything,” said Shelley.