The Most Requested Books of 2019 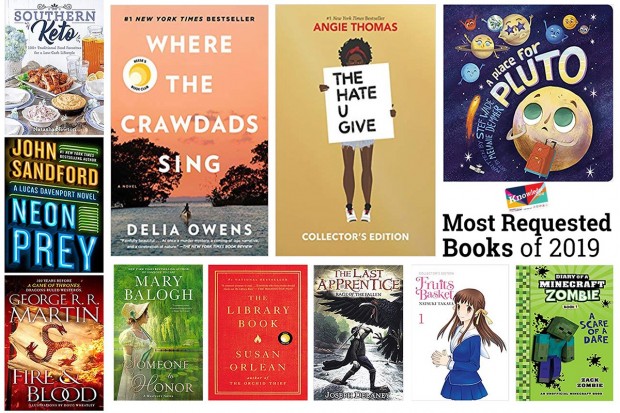 As we will be counting down to a new decade, we thought we’d look at the most popular items by genre at the library this year! So, we’ve gathered lists of the books in our system with the most holds, thinking that this would show which books Houstonians were really itching to get their hands on and give some insight into our readers’ 2019 interests.

Readers across Houston really wanted to read Where the Crawdads Sing by Delia Owens. It was our most popular book of the year with over 1,500 requests! The 2019 Gulf Coast Reads regional book club selection, The Library Book by Susan Orlean, was our most requested nonfiction book. Library users were interested in getting more Keto recipes such as Southern Keto 100+ Traditional Food Favorites for a Low-Carb Lifestyle by Natasha Newton, which was by far the most requested in the Cookbook genre. As HBO’s Game of Thrones officially ended this year, many library users requested Fire & Blood by George R.R. Martin in the Sci-Fi/Fantasy genre to help them prepare for the finale. A book that’s been included on many famous reading lists this year, was also our most requested biography, Educated; A Memoir by Tara Westover.

As for our young adult library users, the most popular fiction book by request was The Hate U Give by Angie Thomas, a book that may inspire teens to be more socially conscious. One of the most popular sections in our libraries is the Graphic Novel/Manga aisle. Teens this year continued to reserve books in the long-running and popular Manga series Fruits Basket by Natsuki Takaya, perhaps in anticipation of the anime reboot set for release next year. Surprisingly, teens were still interested in an older book series called The Last Apprentice by Joseph Delaney with Book 8, Rage of the Fallen being the most requested.

With so many beautiful picture books at the library to choose from, one suspects that when children and parents put a hold on a particular title, it must have some special significance. This year A Place for Pluto by Stef Wade was especially requested by parents and children. Perhaps the highly contested planet or dwarf planet gives children a good analogy for fitting in. Young readers will also be able to tell you the intimate thoughts and daily happenings of the characters in Minecraft as The Diary of a Minecraft Zombie series by Zack Zombie was the most requested Children’s series.

As this list proves, our library users were very much tapped into the national zeitgeist with their requests this year! How will readers’ interests change in the new decade? Only time will tell, so get out to your local library and check out the new arrivals for 2020.

The Path of Hope