Get a little uncomfortable this year 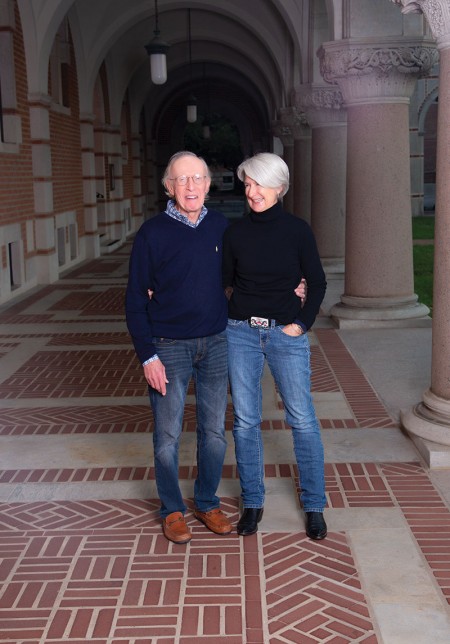 New Year’s resolutions are flying fast and furious. In case you haven’t quite settled in with yours, here’s one more to consider: stepping out of your box.

Much of our lives are spent driving the same streets, going to the same places, seeing the same people. Connections often happen through a screen as we communicate through texts and emails and scroll through social media to find out what friends are up to. What if we put our cyber connections on the back burner and imagine the beginning of this new decade as an invitation to try something new? What about entertaining the idea of taking a new class or starting a new hobby? And, while we’re at it, maybe we think about trying to engage with people different from those we typically see.

Lisa Bryan and her husband Dennis Huston, the “legendary” retired English professor at Rice, are the former magisters (adult live-in chaperones) of one of the university’s residential colleges. “It was the best job I ever had!” Lisa says. She loved being on campus and getting to know the students. Recently though, Lisa was struggling. “A lot of things had built up,” she says, “and I was going through a low time. I’m not a wallflower, I’m an optimist, so I tried to fix it.

“The first thing I did was change the radio program I listened to. I turned to The Answer, 1070 AM, which is a religious station. I don’t always agree with what they’re saying, but there’s this morning show that made me laugh. And I needed something positive coming in.” 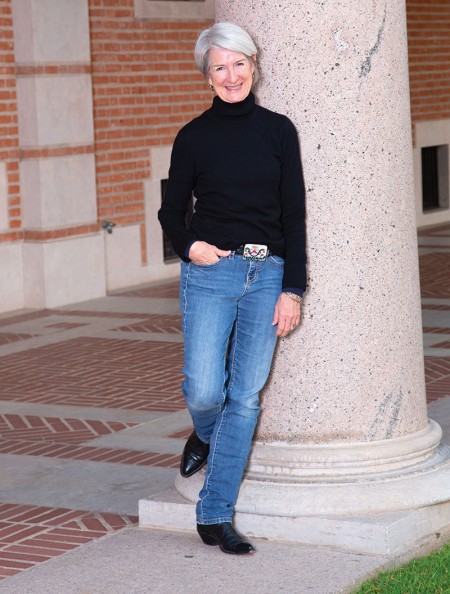 Through the show, Lisa found Jill Robin Payne, a psychologist whom she began seeing professionally. “She’s bubbly and positive, and what she said absolutely turned me around. She said I needed to get laughter in my life.”

Determined, Lisa went on a quest, Googling “laughter in Houston.” That’s where she found laughter yoga.

“This was getting out of my comfort zone,” she says. The class she found was at MD Anderson, but neither Lisa nor Dennis were patients at the time. Lisa remembers thinking, “I’m just going to tell them I need this class. Why wouldn’t they let me come?”

After scouring the MD Anderson campus to find the class, Lisa found that it had been cancelled. “I just started laughing and said, ‘I’m not going to give up.’ So I got back on the internet, and I found another class at The Jung Center. I just drove over there and found out about it and signed up. I loved it. Forcing yourself to laugh felt funky, and I was kind of shy, but it was fun watching everyone in the room. Laughter really is so important and so healing. It’s contagious!” Seeing how excited she was about laughter yoga, Dennis accompanied Lisa to a class. “He loved it too,” she says. “One of my biggest takeaways is that I learned to laugh in my car while I’m sitting in traffic!

“I periodically challenge myself to get out of my comfort zone,” Lisa says, citing the time she was alarmed to realize, when spending lots of alone time in Idaho while her son finished high school there, that she was talking to her dogs. “I saw that the volunteer firefighters needed help, so I trained to be one. I actually got firefighter of the year because I went to extra classes to learn first responder training. That helped me again last year because it helped me realize when my husband was having a stroke.”

Lisa says slowing down and thinking about the next step can make all the difference, no matter how far out you might feel you’re stepping. “If you open yourself up and listen to the messages that are coming to you from the Universe, it can be a wonderful growth and freeing experience.” 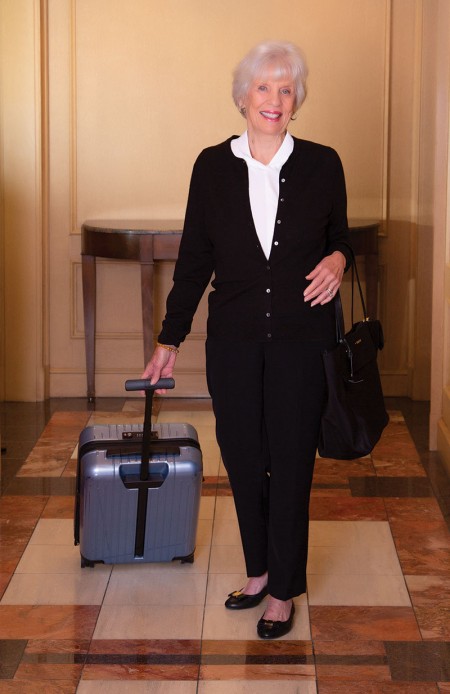 Three years ago, Ann Powell lost her husband Harold, who owned the clothing store Harold Powell for the 37 years they were married. The couple had traveled the world together, and Ann had developed a love for Australia on one of their vacations. But she had never traveled anywhere alone. “I was getting all these brochures about a cruise that circumnavigated Australia,” Ann says. “I was fascinated by the country, I think because of the way it was populated by English prisoners, and because it is so far away. And I wanted to go so badly!”

So Ann, 85, booked her trip. “I have been on many cruises, so I know the ropes,” Ann says. “The only thing different for me was that I went solo, which was a first-time experience for me.

“It was six weeks over Christmas and New Year’s,” she says. “I made all the plans first and then told my children. I thought they were going to say, ‘But Mother, you’re not going to be here for the holidays!’ But they thought it was a wonderful idea and were all for it.

“I’m a scaredy cat, but I wasn’t one bit scared. The only thing I was a little apprehensive about was having dinner. How do you walk into a room and just sit down? But this ship had a share table, which means that everyone at that table wants to meet people. I don’t know if all the ships do it, because I hadn’t gone solo before. But it was just great. I never felt like a third or fifth wheel, and after a while you meet some people you kind of click with. So I was making plans with them, and I was surprised at how at home and comfortable I felt. I saw new things every day and loved going all around Australia.”

Ann has stayed in touch with one of her new friends. “I met a woman from England who was exactly my same age,” Ann says. “World War II was the big deal when we were girls, and I used to think about the little girls in England who were being bombed. We started talking about the war, and that was so interesting.”

Ann spent Christmas day in New Guinea and New Year’s in Bali. “The cruise ship had beautiful decorations,” she says.

“There’s something nice about doing exactly what you want to do,” Ann says. “You eat where you want to, get up when you want to. Of course, I would have rather been with Harold, but I’m certainly not afraid to go by myself now.” 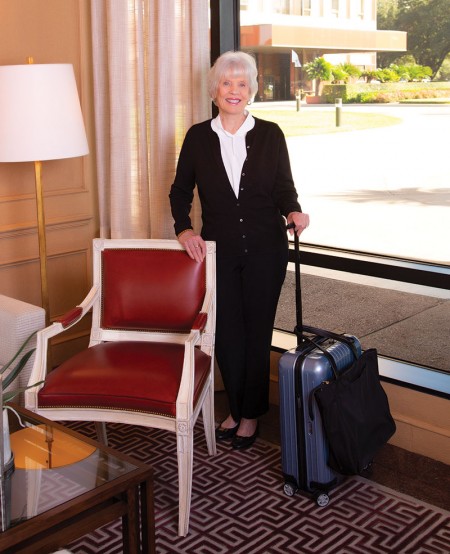 HOLIDAY CRUISE Ann Powell stepped out of her comfort zone by taking a six-week cruise on her own. (Photo: lawellphoto.com)

Ann had such a good experience that she’s already booked a cruise to Iceland, Denmark and Norway for next summer. While she would feel comfortable going alone, Harold’s daughter and her husband decided this upcoming trip sounded like fun, and they’ll be joining Ann.

My own creative outlet got a shot of energy when I took a leap and signed up for a writing class in New Mexico last fall. Completely outside of my comfort zone, taking the class felt frivolous and almost selfish. Not to mention, I had never traveled alone for a week, and I hadn’t taken a class out of town – alone – since college. When I got off the plane in Albuquerque, I literally laughed and said out loud What the heck am I doing here?

Like Ann, I never realized the pleasure of traveling alone, until I actually did it. Full disclosure: I never would have gone had my dad not basically forced me to register and commit. But thank goodness he did. Not only did I learn a lot, but I was inspired and energized, and I met a whole new group of friends. There were 11 of us, one from every decade, starting with a woman who had just turned 30, all from different states. All share a passion for reading and writing. We’ve stayed in touch and continue to do so, checking in with each other, sharing our work and bouncing ideas off one another.

While the week was intensive – 9- to 10-hour days working with an instructor – our last afternoon was free. I ran out to buy my girls some turquoise and went for a drink. Sitting outside, by myself, in my all-time favorite city, having an iced tea and guac, doing my homework on a gorgeous day, I was in heaven. I never would have felt that had I not taken a chance (even if it took being pushed off the cliff by my dad).

It’s hard to realize and even harder to remember, but sometimes, taking a step to do one thing differently, or to do one thing that falls outside our convenient, predictable daily routine, creates the space and the inspiration that we need to be able to truly grow. Even when we might not feel completely comfortable about taking that step. A small tweak or two can expand our worlds in big ways.

A Screening of "Contagion"