Aiding Autism Research One Mile and Gummy Bear at a Time 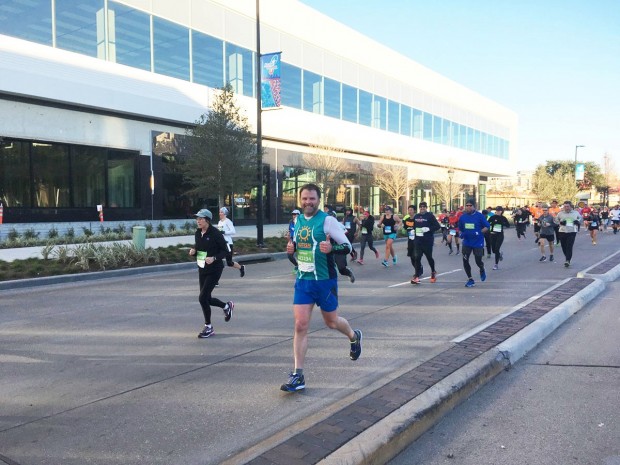 John Morrow, running through the streets of Houston, happy to be looking for friends and family that will rooting for him and making the race a whole lot sweeter.

With a little help from some sweet support, John Morrow is feeling good about his chances of completing the 2020 Chevron Houston Marathon this weekend.

John has tackled the 13 miles of the Aramco Houston Half Marathon, but this year will be the first time John has done the full 26.3 miles of the marathon. John has a strategic plan to complete his mission one gummy bear at a time. With the stealth of a secret agent, John has configured an estimated time and location in which he will hit each of the miles along the route. And he’s taken a photo of the clothes he will be wearing on raceday to help his fans spot him.

On Race Day Eve, John will deliver a supply of gummy bears to his star encouragers, like girlfriend Rebecca Griffith, Nancy Langabeer, Katie Ray, the Winter family, Vicki and Mauri Rizzo, Deborah and Jerry Griffith, Jennifer Leroy, Kyle Kelley and Erin Hicks so they can hand the candies out to him when they see him on the route. Gummy bears are often used by runners because they are slow to dissolve so they last longer safer than hard candy, which has a choking hazard. John has been training with gummy bears and said it’s best to do the same thing during the marathon as during training.

John shared, “Last year, my friend Mike Sasser said he planned to do the full Houston Marathon in honor of his upcoming 50th birthday. Being the nice friend I am, I said I would train and run the full marathon with him. We started getting ready in August and Mike gave training a great shot. Unfortunately he hurt his knee but plans to do the race in 2021. I’ll be thinking of him during the race and look forward to celebrating with him next year.” 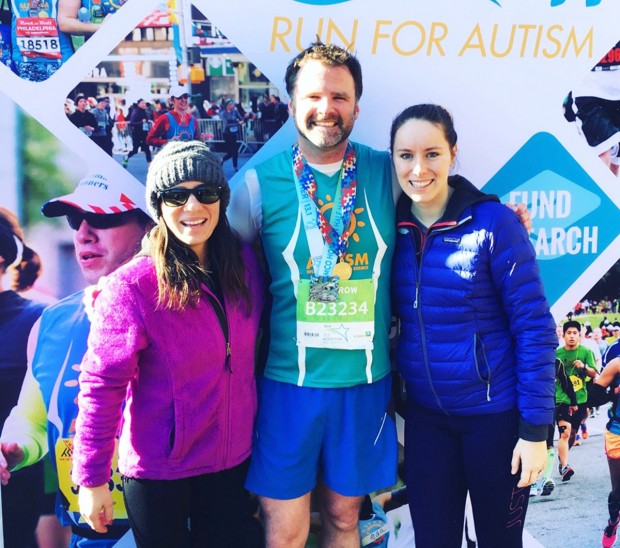 Sarah Rodis and Rachel Edrich, senior coordinators for Run for Autism are happy to cheer on team member John Morrow.

John’s biggest motivation for running is in support of his 16-year-old cousin, Nathan Young. “Nathan is on the autism spectrum and is living his best life, thanks to his amazing family and groups like the Organization for Autism Research (OAR).” This is John’s sixth year to participate in OAR’s Houston Marathon running group. “Run for Autism has been the absolute best group to run with and I'm honored to be a part of their team,” he said.

Marathoners running for a cause receive a second bib to wear on their backs that lists the name of their charity. John said, “You can’t believe how many people run by me saying thanks after they see that I’m running for autism. All during the marathon, people come up to me and say thanks, or mention a friend or relative whose lives have been affected by autism.”

In addition to the rewards of running for a good cause, John says the marathon is a wonderful way for visitors from around the world to discover how awesome Houston and Houston spectators are. He thinks the current route does a great job of showing off lots of great parts of our city.

“The first few Half Marathons, I wore ear buds to get me through those 13 miles,” John shares, “but then I started feeling like I was missing a lot of the cool experiences along the route, so I stopped wearing them.”

Some of the highlights for John include seeing high school drill teams and cheerleaders, smiling church ladies offering prayers, a variety of live bands, mariachis, rock and rap performances, Elvis impersonators, belly dancers, spectators offering Band-aids or Kleenex, inspiring and hilarious signs and seas of cheering spectators, some even yelling for runners by name after spying it printed on their race bibs.

John always gets a laugh when he sees one of the most memorable fans along the route with a pretty creative sign. “He’s a topless guy who looks naked because he’s holding his sign over his shorts and the sign says ‘If you slow down, I’ll drop my sign!’ Definitely gets you motivated to keep running!”

“You could never imagine what an encouraging burst of energy runners get when people are cheering them on or you see or hear someone you recognize in the crowd. Just that brief sighting goes a long way to getting towards the finish line. ”

John’s cycling buddies sometimes ride along the route to give John encouragement then will drive ahead to Mile Marker 24 of the Chevron Houston Marathon (on Allen Parkway near Studemont) for a noise making party sponsored by Karbach. John’s bicycle gang hooting and hollering and toasting to John and the other 25,000 runners include Bryan Davis, Brian Symcox, Chad Symcox, Matt Tanner, Shanon Olivares, Angie Bullington, Mike Sasser, Troy Johnson, Ryan Studt and Robert Noack.

Come out Sunday and join 250,000 supporters to give the athletes a big dose of Houston hospitality. Maybe you'll find John in the crowd - he’ll be the one enjoying gummy bears along the way.

Rainbow on the Green