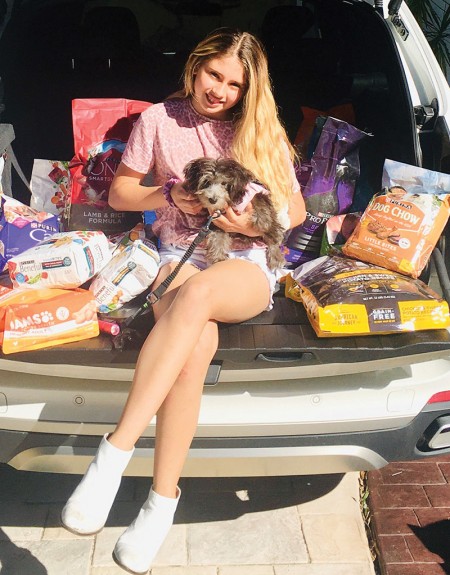 INSTEAD OF PRESENTS Gabriela Hess, a fifth grader at The Joy School, requests donations for charity instead of birthday gifts. Here she’s pictured with her donations for AniMeals.

For the last few years, I have been doing charity work for my birthday. Four years ago, before my birthday, my parents said, “We are giving you an option.” For my birthday, my option was my friends could bring me presents, or I could ask my friends to bring a donation. After doing some research, I picked the charity called “Undies for Everyone.”

Undies for Everyone is a charity that gives students in underserved schools a fresh pair of underwear in case a kid has an accident in class. That way, the kids can go back to class and not get bullied. No one deserves to be bullied.

The year after that, Harvey hit Houston. There were a lot of homeless animals because some houses flooded and people lost their pets or could not take care of them. We found a charity called Houston Pets Alive. I asked my friends if they could donate pet food instead of giving me presents. We took the food to the rescue. They gave me a tour of where they were keeping the cats and the dogs. There was so much food, it barely fit in my mom’s car.

Last year’s birthday, I had a very small party, so I skipped a year. This year, I had a bigger party, and I asked my friends to bring pet food again. This year I found a charity called AniMeals. AniMeals is like Meals on Wheels for animals. It’s for people who cannot afford to buy their pets food. The pet food is delivered to their homes.

My parents thought it was so nice that I asked for donations instead of getting gifts that they offered to give me a little money for every person who donates. This is great because now I can save up to buy cool things! It’s also great because it makes me feel happy that I can help others. Going forward, I want to do more charity work, not just for my birthday.

Schools in this article:
The Joy School
Tags:
Charity work, Undies for Everyone, AniMeals