Revitalized for the 21st century 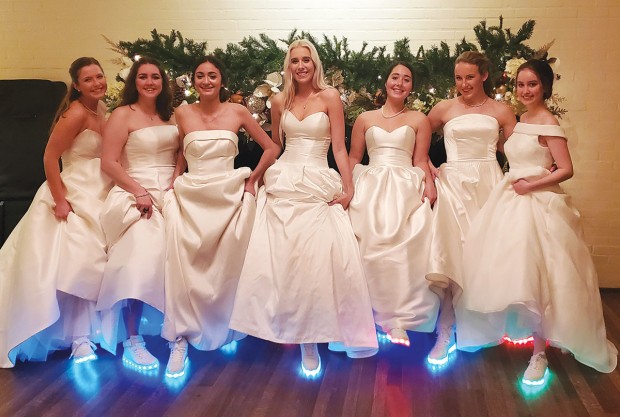 Each of the three times Andie Chilson visited Houston Bridal Gallery to have her gown altered, someone inevitably mistook her as a bride.

Shoppers would congratulate the 22-year-old college student wearing the white, Jackie O-style dress, and inquire about the big day. Andie, quietly amused, would correct them – “No, I’m not getting married.”

The dress was for her debutante presentation.

The presentation, a black-tie affair, took place on Dec. 28. It featured seven young women from Houston, who were presented in front of their family and friends at The Forest Club, a private country club on Memorial Drive.

The American debutante ball dates to the 1800s, and it was traditionally a way to present young women to high society and to announce their marriageability. But these recent debs, attending colleges across the country, are not focused on tying the knot any time soon.

“The tradition has transformed,” says Christie Fatica, one of the debs and a senior at Bates College. “None of the girls are looking to get married right now. I know I personally am not. And if someone was expecting me to, I would set them straight.”

Despite their distaste for the patriarchal origins of the debutante ball, the girls were eager to bring back what they see as an important tradition. 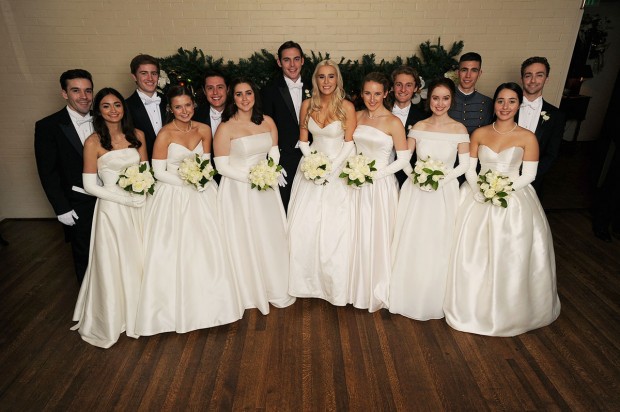 “I value tradition,” said deb Margaret Trautner, a senior at MIT who plans to pursue a doctorate in mathematics. “You can have tradition without upholding ideals that are outdated.”

The Forest Club had not held a debutante ball for the past 18 years, due in part to its small size. Unlike other Houston country clubs that have 1,000-plus families on their membership rosters, The Forest Club’s membership includes about 400 families. The smaller community means fewer eligible debutantes each year.

“The interest just fell out,” said Monette Chilson, Andie’s mother and chair of the recent ball. “Times change. Whatever was going on, there just weren’t as many girls interested in being a part of it.”

Two years ago, Monette decided to attempt to bring back the tradition for her daughter. The Chilsons live down the street from the club, and Monette recalls when her daughter Andie, only 4 at the time, saw the 2001 Forest Club debs in their white ball gowns. Andie thought the debs were princesses and said she wanted to be a debutante when she grew up.

Sure enough, when Andie was a sophomore in college, she brought up the idea. Monette was on it. While the club supported the venture, some members were skeptical of whether the event would pan out; previous members had tried unsuccessfully. Also, the club had previously held its deb balls under a tent in the parking lot, but construction no longer made that feasible.

“It’s a lengthy planning process,” says Jesse Brown, who tried to revive the ball in 2008. “We got to a point where we thought we had a good class, but then it became uncertain and we couldn’t proceed with it.”

With the help of a diligent committee, Monette succeeded this time. Over two years, they planned every aspect, from recruiting participants, to selecting centerpieces (hydrangeas and magnolias), to finding a tent for The Forest Club’s tennis courts – the selected location. 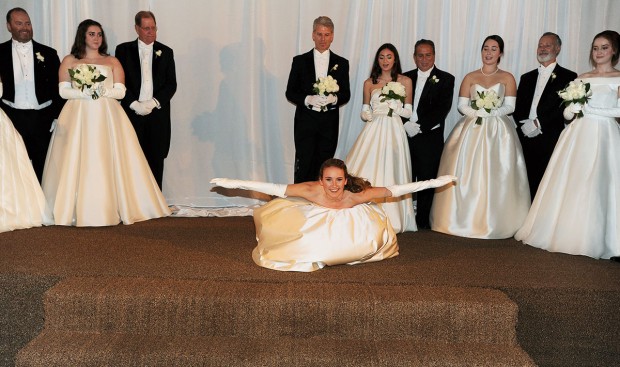 Monette enjoyed watching the girls take ownership of this rite of passage tradition and find new meaning in it.

“The assumption was, as we were preparing, that these girls are going to go out and become professional women,” said Monette. “[The etiquette class] wasn’t about how to make a pot roast, or how do you throw a dinner party. There’s a lot more focus on becoming strong and empowered young women.”

At the presentation, each deb was escorted along the ballroom’s center aisle by her father or grandfather. In line with tradition, the deb then performed “The Texas Dip,” a challenging maneuver that requires the performer to cross her knees, bend over and almost touch the floor with her nose. After all the presentations, the girls danced with their father or grandfather to Frank Sinatra’s “The Way You Look Tonight” and then with their date to “Brown Eyed Girl.”

Once the formal presentation was over, the event transformed into a typical 21st-century party, with hip hop music and coordinated line dancing to “Wobble,” a 2008 rap song. At one point, all the debutantes changed out of their high-heels and donned light-up sneakers, the perfect dancing shoes. Guests took selfies using a custom Snapchat filter.

Now, the club plans to make the ball a biennial tradition. “It’s only going to get better in the future,” said manager Darryl Parnell. “We have the game plan for it, so going forward, it’ll be an even bigger success.”