We never forget our first car 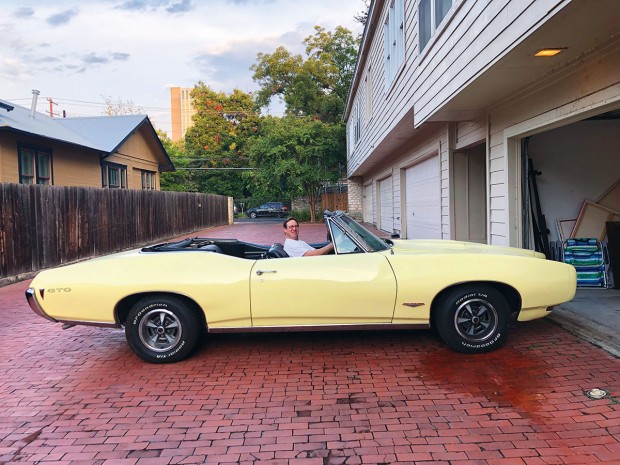 STILL HAS IT Alan Nirenberg is ready to take his restored 1968 Pontiac GTO convertible out for a spin.

At the beginning of my sophomore year at Bellaire High School, I was eager to get my driver’s license. Having taken the required course the previous summer, I would drive my family around whenever they needed to go out, and even when they had nowhere to go. I just wanted to drive. My dad often displayed little patience as he took me out to practice my parallel parking in the Congregation Beth Israel parking lot using broom sticks stuck in two orange cones as boundary markers.

Once I received my driver’s license, I immediately asked to borrow my mom’s 1973 mint green Pontiac Catalina to pick up my high school debate partner to bring him over to my house. When we arrived home, my mom asked my friend how my driving was. He did not hesitate. “He did fine, Mrs. Weil, although I was a little concerned when he hit that old lady crossing the street.” For a moment, my mom took him seriously. She never really cared much for my driving after that first day.

For some reason that I cannot recall, my heart was set on a 1977 Mustang Ghia for my first car. This was not the classic Ford Mustang that was introduced with the 1964 model, but the second-generation Mustang that was introduced in 1974. I selected a model that was chocolate brown with tan vinyl interior and a tan vinyl landau roof. That Mustang sported a powerful 2.3L V8 engine that gave the car a lot of pep.

Everyone remembers their first car.

A fraternity brother of mine still has his first car that is now 51 years old. Currently living in Austin, former Meyerland-area resident Alan Nirenberg recalls that his brother bought a used 1968 Pontiac GTO around 1969 that would eventually become his own first car.

“I don’t exactly remember the circumstances, but in 1978, when I turned 16, my brother let me use the car. So, the GTO was my first car. I came back from the driver’s test with my new license in hand and immediately was driving a 1968 GTO convertible!”

A couple of years later, Alan bought the now-run-down car from his brother. Alan let it sit in his mom’s garage for several years and then, eventually, had it towed to where he was living at the time and found a mechanic to do a frame-off restoration. This type of restoration includes the entire body being removed from the car, the frame inspected entirely, and all parts reconditioned – or replaced – and repainted.

“The car had been painted aqua-blue for some reason. But I wanted to take it back to original specs. I took it back to what the car was off the showroom floor. I ordered paperwork based on the VIN that provides exactly how it was equipped and the original yellow paint color. This took about a year to do. I spent about $17,000 to restore it. It was well worth it. Both financially and emotionally.”

Alan gets comments every time he takes it out for a spin.  “Either just a thumbs up or ‘great car!’ People ask if it’s for sale. The 1968 GTO was Motor Trend Car of the Year in 1968. Driving an original muscle car is the greatest experience.”

Tanglewood resident and neurosurgeon Robert Levinthal and his wife Nancy each remember their own first cars.

A 1957 Opal was Robert’s first. “My dad went out and found this vomit-green car, bought it, and it had nothing to do with me,” recalls Robert. Besides the color, the car had another issue. “The previous owner of the used Opal had plugged up a radiator leak with bubble gum. When I first ran low on fluid, my dad and I found out that the radiator had a hole ‘fixed’ with bubble gum.”

Nancy’s first car in the 1960s was more in line with what she wanted and made her quite happy. Her 1963 white Ford Fairlane 500 sported a bold red leather interior, fun for driving around Austin with friends. “The interior was leather, in perfect shape, red, and it had – or we put in – a 4-track stereo. I thought that, even though it was used, it was great.”

Editor’s note: Our cars may come and go, but memories of our first ride never fade. What was your first car? Let us all know at [email protected], or comment below.