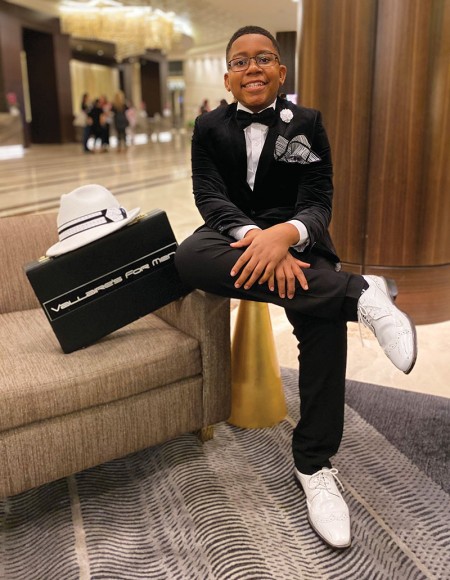 We’ve all heard of recycling by now. But with the new year here, we thought it would be fun to explore a related and decidedly more creative trend: upcycling.

What’s upcycling, you ask? As the name implies, it’s taking trash – or something that’s about to become so – and transforming it into treasure, thereby upping its value but also – and this is important – removing it from the waste stream.

We turned to a couple of remarkable upcyclers who, perhaps not surprisingly, are members of Generation Z; young people, it seems, have a higher-than-average awareness of that waste stream, and they are nothing if not creative.

Brice Everhart and Grant Maniér are two individuals who fall into those two categories – but beyond that, they defy categorization. Brice, who is just 12, started his successful upcycled men’s fashion accessory business when he was only 8. And Grant, who is autistic, started his “eco-art” business at the age of 15 as a form of repurposing the torn paper he generated as a form of therapy.

Both have become so successful with their enterprises that they are now educators and philanthropists, using their skills and their income to help others. And both invite readers to include upcycling on your New Year's resolutions list this year – either through DIY upcycling projects of your own, or by supporting local artisans who use repurposed materials.

Brice, who Small Business Today Magazine described as having “a 40-year-old businessman’s mind in a barely 9-year-old little boy’s body,” was just 8 when he got the idea of launching a business to help his mother, Shareca Vallaire, who was sick and had to close her business. He had a good role model; his older sister, Brooke, who launched Vallaire’s, a custom luxury lifestyle clothing brand in 2011, when she was just 14. He would accompany her to fashion events, and he noticed a man wearing a flower lapel pin. He observed that men wanted to buy products, too, but Brooke didn’t make anything for men.

One day, his mother was taking down a shower curtain as she was redecorating the bathroom.

“It was a cheetah print – and I was like, hmmm. It’s plastic, so it can kind of hold up well enough so it won’t get broken in the process of making it, but it will still look presentable, and it has nice colors to it.”

Those were his first lapel pins – the first of many. He cut up his old jeans, his sister’s remnants, and whatever he could find. Then he began broadening his scope to include found objects, like costume jewelry.

“I didn’t know I was upcycling at the time; I just wasn’t able to go out and buy fabric, so I would go around the house and look for things that nobody was using,” he said.

In August 2015, he asked his mother if he could start his own business.

“You focus on fighting for your health, and I will focus on creating wealth,” the boy told his mother. When she replied that she wasn’t in a position to help him as she had with his sister, he replied, “I don’t need your help – just call your business friends!”

That’s how his own line, Vallaire’s for Men, was launched as an extension to Vallaire’s, and Brice began marketing his lapel pins, bow ties and pocket squares to the businessmen he would meet at networking events. Four years later, his work has been recognized by The Washington Post, Fox News and a host of others; he was chosen as Small Business Today Magazine’s Youthpreneur of the Year and was featured in the 10th Edition of Who’s Who In Black Houston, and has won the King Campaign Next Generation Award, among many others.

Besides the pride in being able to help resolve the family’s budget crisis, Brice says, it feels good to give new use to old items instead of sending them to the landfill. And now that he’s an invited guest speaker at schools, organizations, events and businesses, he does his best to spread the word about upcycling and caring for the environment. He also does so through the youth platform he created with his mother, the Young Empowerment Society, which empowers young entrepreneurs like himself.

“We need to stop because pollution is killing the Earth and the generations to come,” he says. “Everything goes hand-in-hand.” 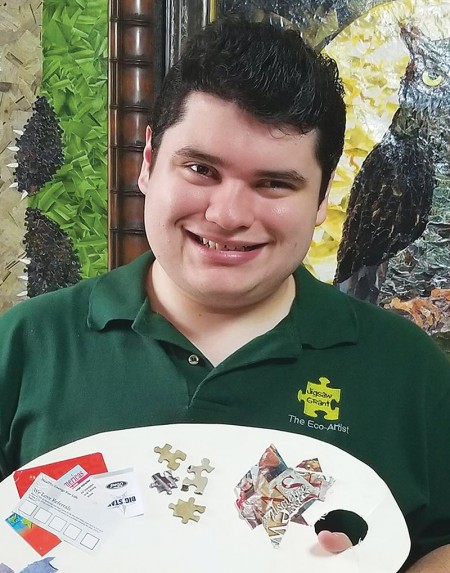 Grant Maniér, aka “Jigsaw Grant,” found his success through his disability. He’s been an artist as long as he can remember, painting and drawing on every available surface. His autism, however, produced a great deal of anxiety, and he began tearing paper as a way to help him cope with the stress of going to a public school where people didn’t understand him; the teachers told him to stop tearing paper, and the kids sometimes bullied him.

His mother, Julie Coy, decided to homeschool him, and he had more time and space to focus on his art. Soon she hit upon the idea of Grant’s piles of shredded paper as a resource. “As a single mom, I couldn’t really afford $300 for a paint supply,” she explained. She suggested to Grant that he use the paper to create mosaics. He started making Monet-Van Gogh-type impressionistic pieces and gifting them to his mother.

His first one, a stunning depiction of a Sun God, caught the attention of one of his mother’s girlfriends, who wanted to buy it.

“I thought, maybe I can get $100 for it,” recalls Julie with a laugh. She ended up deciding to keep the originals and make prints. Years later, the Sun God sold for $8,000.

Grant ended up winning the Eco-Art Championship at the Austin Rodeo, and that kicked off his career. At 15 he launched his business and began getting invitations to teach his art form to classes and workshops. Besides the torn-paper mosaics, he was also using discarded jigsaw puzzles, cut-up greeting cards and mixed media to create his textured, experimental pieces, some of which can be viewed on his website.

Nowadays people save their jigsaw puzzles for him and deliver them to him or leave them at Impulse Art Gallery; he’s got a collection of over 300 boxes. “It’s a good thing I’m OCD,” laughs his mother, who has developed a system for cataloguing all of Grant’s unusual art supplies.

Grant and his mother have launched a series of books for kids with disabilities, illustrated with his eco-art. The first, Grant the Jigsaw Giraffe: Different Is More, has sold over 14,000 books since it was released last year.

Now 24, Grant is attending an online college part-time, studying acting and graphic design, and paying the tuition with his artwork. He’s proud to be able to “pay it forward,” donating more than $240,000 of his proceeds to different charities. And he’s happy to be helping others find ways to find new uses for throwaways.

“Really I just want to help with keeping our Earth clean, green and safe,” he said. “You know with all the trash in the oceans killing the sea animals, and how the whole environment is affected – I’m just trying to do my part to help.”

Brice and Grant have an abundance of ideas for how you can upcycle your way to a greener 2020, and both are sharing them with workshops and classes.

Here are a few tips gleaned from the two eco-youthpreneurs and other top upcyclers: