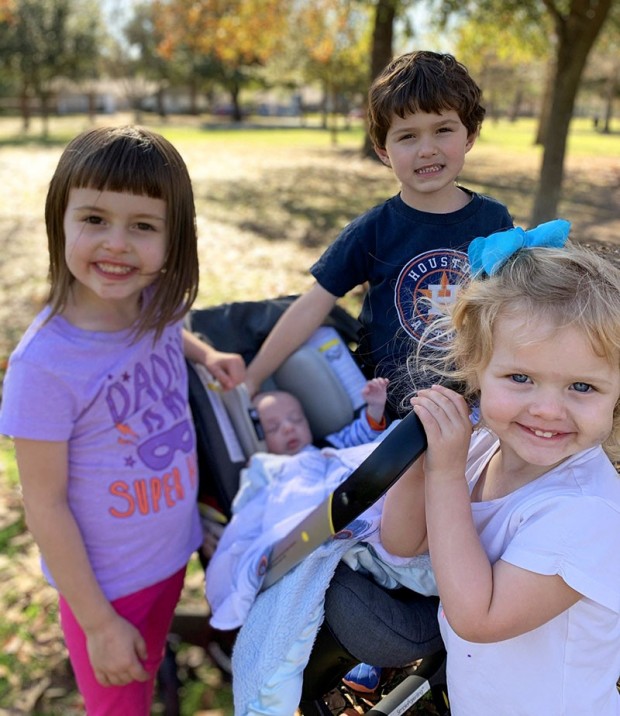 SIBLINGS The McQueen kids - Lila (on left), Cash (in back), Georgia (on right) surround baby Henning on a beautiful day in Houston.

Almost four years ago, I wrote a Buzz Baby article with the headline “When the Fourth Arrives.” I met Buzz parents who had four kids and spoke to them about what life is like when you have that big of a crew. Their experiences seemed so far from my own personal parenting journey, as we had only two kids – 1-year-old twins – at the time.

I recall one woman describing the day she took her newborn son along with her as she chaperoned her older son’s field trip to the zoo. I had a vision of her, recovering from childbirth, as she nursed her baby by the tigers and rocked him by the bears.

Now, I get that story. In November, we welcomed our fourth child, Henning.

It has been a challenging experience, bringing a brand-new baby home when there are three older kids, with different needs, big emotions, and even a little bit of homework.

Time feels limited to do all the things – endless laundering of tiny socks, never-ending dishes and more, and sometimes, like that mom I spoke to back in 2015 pointed out, I feel like there’s not always enough Mommy to go around. It’s not perfect, and that’s okay.

I am not sure how this magically works out, whether the universe sends childbirth-order vibes out, but, so far, he’s been a perfect fourth child. He’s sweet and easy-going. He loves to be held by his older siblings – our daughter, who turns 3 this month, and the twins, 5. He has deep brown eyes that peer around our crazy house as he takes in the sights and sounds, which also includes barking dogs – we have three of those.

I have learned an important lesson so far with having a fourth: Keep your expectations at a realistic level. All the time. It’s never going to all get done, and never going to feel like you have it all together.

For example, I let the twins dress themselves for Pre-K each day. After early-morning breakfast and lounging in pajamas, they retreat to their rooms to pick their clothes. This is my daily morning entertainment: to see what they’ll waltz into the room wearing. If they’re clothed and it’s appropriate for the weather that day, we roll with it.

Oh, and you know those perfect family photos of moms and dads holding a tiny sleeping newborn, swaddled up in their arms, while their toddler is gazing into their new baby sibling's eyes? Yeah, those are harder than they look to pull off. Props to you, parents with those shots. 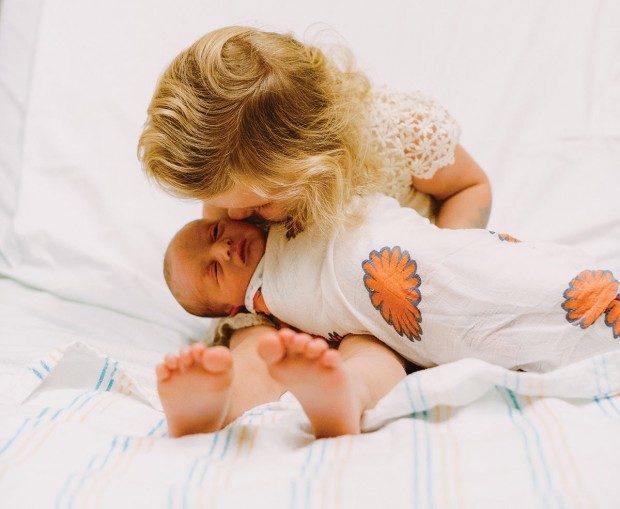 I had scheduled photos with a local Houston photographer whose work I had been Instagram-stalking. We got on her books a week after we got home from the hospital. I was so ready to capture those sweet moments of Henning snoozing away while the three older ones looked on at him, my husband and I sitting next to them, looking on at our four children.

However, my dreams were pretty much shattered when my 5-year-old daughter walked in with freshly cut bangs that she cut herself – not to mention a busted chin from falling off a chair. Immediately following her, my son walked in, with a huge chunk of his bangs cut, too.

I should have known life with four would be a ride. I was sitting in the hospital bed, holding our 24-hour-old Henning when an email hit my inbox. It was from my son’s teacher. He had a not-so-great day at school. It opened with, “Annie, I hate to send this to you right now but…”

I showed the email to my husband. I emailed the teacher, from the hospital bed while nursing Henning. This was the first time I had received an email like this about my son. It hit me at that moment, and my heart started to ache a little.

My son was going through something, acting out at school that day, possibly adjusting to a new baby at home, or maybe just having an off day, and I was in the bed at the hospital, unable to go to him – to hug him, talk to him, and see how we could work the problem out. I felt it strongly at that moment – the reality of being a mom of four.

For now, we’re enjoying this ride, one day at a time. Sometimes, as I look around my house, with scattered opened markers on the ground, shoes and dirty school socks on the floor, the dog chewing the corner of the rug, I have to remind myself of that heartbreaking truth – the years with the tiny ones don’t last forever. We’ll have many new chapters ahead.

For now, I’ll enjoy the chaos. You know what they say – babies don’t keep.