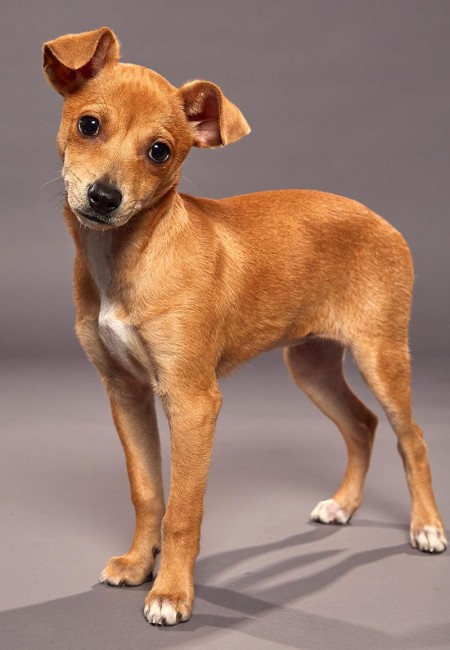 Houston Texans superstars Deshaun Watson, DeAndre Hopkins, JJ Watt and the rest of the team won’t be playing this Super Bowl Sunday, but there is still one Houstonian who you can cheer for that will be looking turf-iffic. A player that’s even cuter than halftime performers Jennifer Lopez and Shakira. And furrier than them too.

The beloved program airs on the Animal Planet channel on Super Bowl Sunday at 2 p.m. Puppies play their own bowl game inside a model stadium, with ruff-eries and dog-gone fun commentary. This Sunday will mark the 16th Puppy Bowl with dozens of adorable players that come from more than 60 shelters and rescues from around the country drafted on either Team Ruff or Team Fluff. All will be competing for the “Lombarky” Trophy and the MVP (Most Valuable Puppy) award. 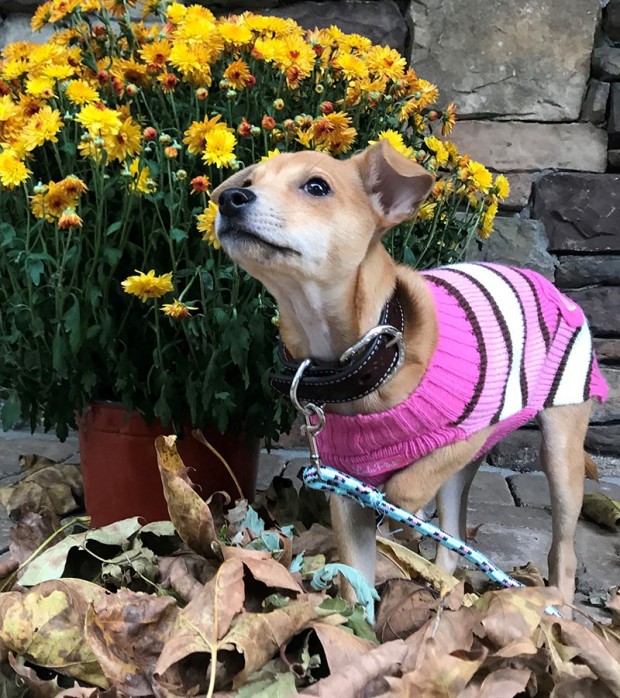 Houston’s own Jora was recruited from Houston Pets Alive! (HPA!), a local rescue organization focused on helping animals in overcrowded Houston-area municipal shelters who are still waiting to be adopted and in danger of being put on euthanasia lists. HPA! strives to locate happy homes and foster parents for dogs and cats who need loving owners. 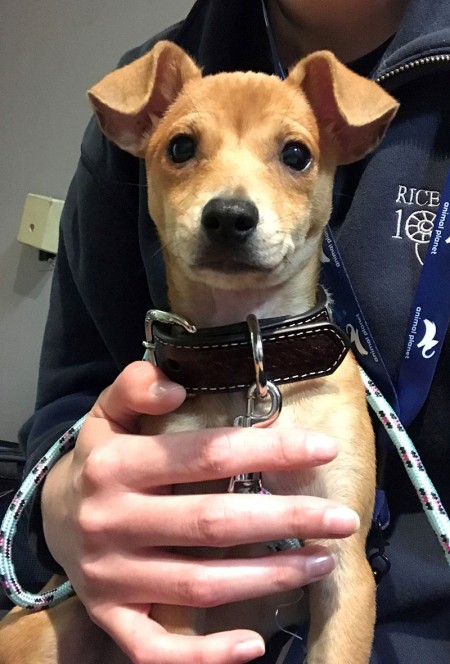 After traveling all the way from Houston, Jora was excited to go into the Puppy Bowl filming. This is Jora patiently waiting for her turn to go into the studio. (Photo courtesy of Houston Pets Alive!)

Jora traveled to New York City for the Puppy Bowl taping. A member of Jora’s entourage, a staff member at HPA, gave us the scoop on the star’s filming experience: “The journey to New York for the taping was quite an adventure for Jora. She loved feeling like a mover and shaker taking three main modes of transportation: a car for local travel, an airplane from Texas to New York, and a train into New York City! The Puppy Bowl itself was a long day of meeting people and puppies, playing on the field, and posing for photos. Jora had a great time!"

The Puppy Bowl is pre-taped and the results are top secret. Production consists of 21 cameras including slow-motion replays, nose-to-nose action from the water bowl cam and the fan-favorite: puppy kiss cam.

While in New York, Jora was able to squeeze in some sightseeing including Madison Square Garden and a visit to Jones Beach near Long Island. Jora also enjoyed smelling New York pizza and bagels. 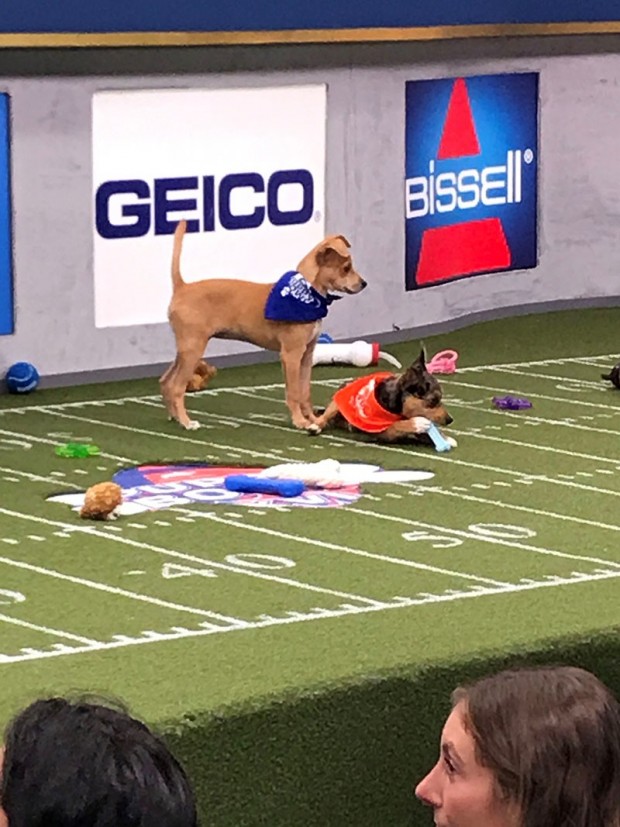 Lights, camera, action! Jora on the field being filmed for the Puppy Bowl. (Photo courtesy of Houston Pets Alive!)

Jora – who came to Houston Pets Alive! with her mom and four siblings - was lucky enough to find a home with Brandon and Danielle Davis and their four children who were thrilled to have Jora become part of their family. They love her just the way she is but decided she didn’t really look like a Jora and decided to change her name.

Danielle said, "The kids suggested new names and voted to pick one. I can’t even remember what we voted on, but it still didn’t seem quite right. After a week of watching her hop around our house, she just sort of ended up as HunnyBunny."

The Davis family adopted HunnyBunny because of her can-do attitude and sweet disposition. She loves to have fun and also loves naps. 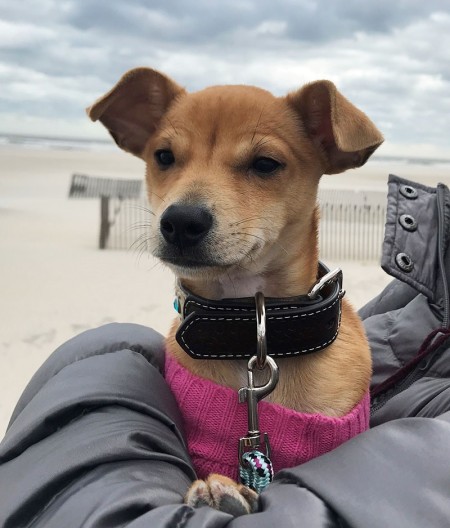 Jora knew New York had the Statue of Liberty but she didn't know they had beaches, too. She liked seeing the waves and getting some sand between her toes. (Photo courtesy of Houston Pets Alive!)

When asked about Jora/HunnyBunny’s appearance on the Puppy Bowl, Danielle said, “She was definitely meant for stardom - she loves the camera and her fans!"

Thankfully Jora’s brothers and sisters have also found fur-ever homes but their mom, Cider, is still waiting to be adopted and is available at Houston Pets Alive! (Adoption center located at 2800 Antoine Dr., Suite 2854). In addition to lots of other great traits like being a passionate licker, Cider is 14 pounds, house-trained, crate-trained, teenager-friendly, dog-friendly, and good with cats - she currently lives with 13.

So, before you go watch the San Francisco 49ers and Kansas City Chiefs’ kickoff at 5:30 p.m. CST, tune in to cheer on Jora (now HunnyBunny’s stage name) and all the rescue puppies. You never know, she just might have been inspired by the bone-ified Texans’ Big Dogs and their skills like tossing, fetching and swatting. HunnyBunny, we hope you have a ball. 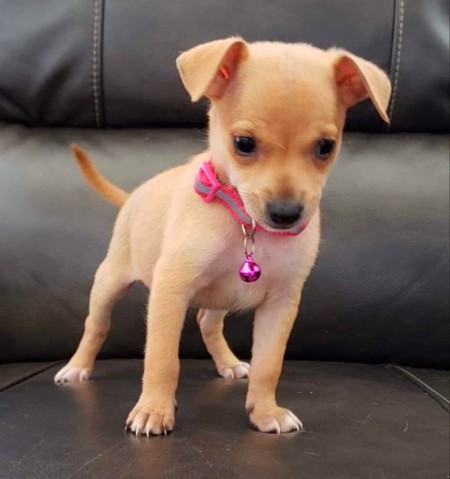