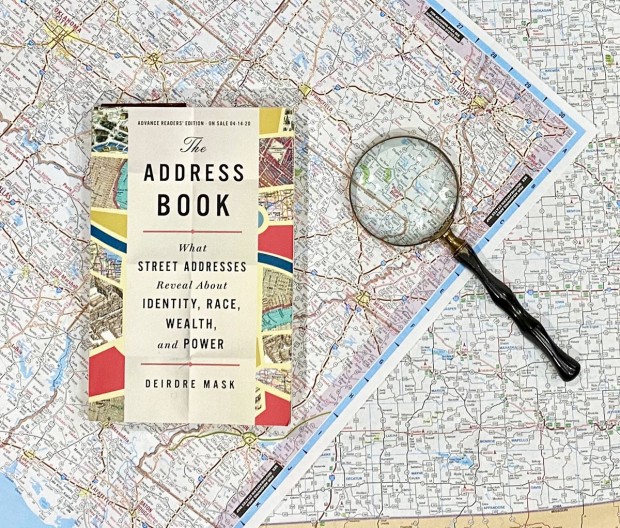 Cindy Burnett is currently enjoying The Address Book by Deirdre Mask, a nonfiction book about street addresses and what they mean.

I have not written much about nonfiction for Page Turners so this week I decided to highlight a few of my favorites. My nonfiction reading is done in waves – I will read only fiction for a while and then suddenly realize that I have not picked up a nonfiction title in forever and read several in a row. Because I read so few nonfiction books in 2019, I have made reading more my primary reading goal for 2020. Hence, I am currently reading two nonfiction books- The Address Book: What Street Addresses Reveal About Identity, Race, Wealth, and Power by Deirdre Mask and The Suspicions of Mr. Whicher: A Shocking Murder and the Undoing of a Great Victorian Detective by Kate Summerscale - and I am thoroughly enjoying both.

Here are some nonfiction books that I enjoyed and regularly recommend to people:

All Over the Place: Adventures in Travel, True Love, and Petty Theft by Geraldine DeRuiter – All Over the Place had me laughing so hard at times that I had tears streaming down my face. DeRuiter has written a travel memoir unlike any other travel memoir that I have read, and the result is fabulous. She writes about both her travels around the world and her own internal journey through brain cancer, spousal trouble, and dealing with her mother. DeRuiter manages to cover numerous destinations that I have now added to my list of places to see while telling hysterical stories about her time in each place. The book ends with the following sentence about traveling, which will stay with me for a long time: “Even if you don’t end up where you planned, you still might end up somewhere great.” This is a great motto to keep in mind when taking a trip, but even more broadly to remember in our day-to-day lives.

Father of Lions: One Man’s Remarkable Quest to Save the Mosul Zoo by Louise Callaghan – Father of Lions tells the tale of the ISIS occupation of Mosul, Iraq, in the mid-2010s through the lens of Abu Laith (known as the “Father of Lions”) and his determination to save the animals in the Mosul Zoo at any cost. Callaghan’s focus is on the civilians in Mosul, people who had already been living under tense and somewhat restrictive conditions due to the ongoing war in Iraq even before ISIS arrived. She describes their everyday lives and how almost every single aspect of their existence was altered following the ISIS invasion. Callaghan also skillfully imbues the story with the cultural, societal and religious norms found in present-day Iraq allowing the reader to better understand the impact of the occupation on the city’s residents. Father of Lions is a tough read, but I am so glad that I read it and feel that I have a better understanding of some of the issues at play in Iraq in this century. This knowledge certainly makes me thankful for my freedom and infinitely more sympathetic to those who have had to endure not only ISIS, but really decades of war. Father of Lions is a captivating and timely read, and I highly recommend it (you will need tissues).

Too Much Is Not Enough: A Memoir of Fumbling Toward Adulthood by Andrew Rannells – I have followed Rannells’ career since I saw him on Broadway in Hairspray and subsequently Book of Mormon; he is a fantastic actor and thankfully also a good writer - his memoir does not disappoint. His heartfelt tale describes his struggle to come to terms with himself and also his relentless pursuit of his dream to succeed on Broadway. While the public first learns about most actors/actresses when they hit it big, the path to such success is usually littered with countless failed auditions, parts that were not meant to be, and a fair number of behind-the-scenes anecdotes. Too Much Is Not Enough is chock full of such stories. However, the book is ultimately one man’s story of love, family and success.

The Wrong End of the Table: A Mostly Comic Memoir of a Muslim Arab American Trying to Fit in by Ayser Salman – Salman examines growing up in the United States as a female Muslim and always feeling like she is sitting “at the wrong end of the table.” Moving with her family when she was young from Iraq to Columbus, Ohio, Salman endured culture shock of epic proportions. Daily American life occasionally placed her in positions that ran contrary to her religious beliefs and following the 9/11 attacks, Salman experienced hostility for simply being Muslim. I thoroughly enjoyed the book and felt I learned a lot about a culture with which I was not very familiar.

This last book does not come out until February. It is well worth the read so keep your eye out for it:

The Falcon Thief: A True Tale of Adventure, Treachery, and the Hunt for the Perfect Bird by Joshua Hammer  - This book is a fascinating true tale about a man, Jeffrey Lendrum, who spent his life stealing and smuggling rare bird eggs and the UK Detective, Andy McWilliam, who eventually brought Lendrum to justice. The story is a mix of adventure, history, and true crime and provides a glimpse into the world of rare bird and rare bird egg obsession. The Falcon Thief spans the globe from the Middle East to Canada to Africa to the United Kingdom and is truly an intriguing story. Reading about the detrimental impact on numerous bird species and the singular focus and obsession demonstrated by those involved in the bird egg theft and bird capture was both depressing and mind-boggling. Once I started this book, I could not put it down.

I would love to hear some of your favorite nonfiction books – feel free to comment below with your recommendations!