Where to Run in Houston

Now there’s no reason not to 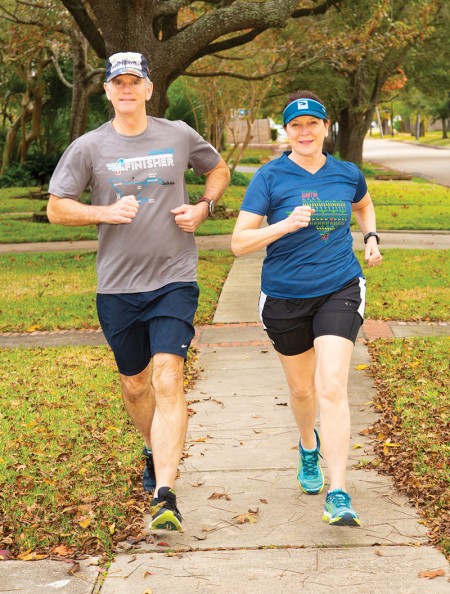 RUNNING HOUSTON Steve Howard and Patti Brock Howard run all over, including their own West University neighborhood, along Buffalo Bayou and through Memorial Park. (Photo: lawellphoto.com)

With the Chevron Houston Marathon and Aramco Houston Half Marathon approaching this month, thousands of Houstonians are in training mode. For inspiration in the coming year, some local runners agreed to share their favorite places to train. Ready. Set. Run!

Memorial Park Memorial Park is a destination for runners and walkers of all levels. “It’s everyone’s favorite,” says Tim Neckar, who coaches P.E. at T.H. Rogers School and ran his first marathon at age 14. Most popular is the 3-mile loop. The path offers ample room, and with plenty of lighting, runners feel safe after dark. Parts of the path are shady, and there are water fountains and even a clean bathroom along the trail.

For speed training, Tim recommends the quarter-mile asphalt timing track, situated north of the Tennis Center. Tim also highlighted the running trails on the south side of the park – “where mountain bikers go for trail riding” – perhaps well-suited for runners looking to get away from the crowds.

Rice University Loop “I might be a little biased on this one,” says Rice University graduate and running enthusiast Haley Kurisky, “but Rice is a great place to run. Right by the medical center, the trail is full of fit doctors and students running but is never too crowded.” The dirt trail surrounding campus is just short of 3 miles and is well shaded with large oak trees lining the trail. Haley, a law student and a Buzz columnist, suggests parking along Main Street, in Rice Village, or in one of the marked visitor lots around Rice’s campus that charge by the hour.

Hermann Park and Brays Bayou Situated just across from Rice University, Hermann Park is a popular spot for runners trying to extend a Rice University loop jog into a longer training run. Brian Williams, who has completed a marathon in all 50 states, likes to start his run at Rice Village, hit Hermann Park, then continue to Brays Bayou, running all the way to the University of Houston-Downtown. “The city is becoming really good for running,” says Brian. “They are expanding and connecting a lot of bike routes. For an urban landscape, it’s quite nice.” Brian suggests checking out the Houston Bike Plan Map for a full picture of the city’s bike trails.

Terry Hershey Hike and Bike Trail Located in West Houston, this park offers an east-west running and biking route along the Buffalo Bayou. Veteran marathoner Randy Keith rattled off several reasons he loves running this park: “water fountains every mile or so, three bathrooms between Highway 6 and Beltway 8, lots of shade on both sides.” He added that “in flat Houston, there are some very small hills that add a little change.”

Terry Hershey is ideal for long runs, said his wife, Donna Keith, who runs half marathons. The park’s main trail runs about 12 miles and connects to George Bush Park, where you can add more mileage. Keep in mind that lighting is limited, and the main trail is pavement.

Buffalo Bayou Park This 160-acre greenspace features plenty of hike and bike trails, including a 5.6-mile scenic loop running from downtown to Shepherd Street Bridge. “I especially liked running along the Bayou in the early mornings at sunrise where you could see the downtown skyline,” says Patti Brock Howard, who has run more than 10 marathons. But if you aren’t a morning person, running in the evening might give you a chance to spot the thousands of bats at the Waugh Drive “bat bridge” at sunset.

Heights Boulevard  A hidden gem is the Paul Carr Jogging Trail, a wide, roughly 2-mile long esplanade running from I-10 West to West 20th Street. Emily Guyre, a third-generation Houstonian who runs the half-marathon every year, says, “I love the way the trail meanders up and down the middle of a major thoroughfare while giving me the feeling that I’m up close to nature.” She also enjoys the sites along the path: a historic Heights World War II memorial, a Victorian rose garden, Donovan Park Playground and a Lombard lamp that was a gift from Hamburg, Germany, to the city of Houston. Parking is available along Heights Boulevard.

Your Own Neighborhood  Sometimes, there’s nothing better than running in your own neighborhood. For me, running through my neighborhood, Bellaire, is both convenient and a way to admire new homes and say hello to other neighbors out jogging or walking their dog.  I enjoy going North on Ferris Drive, weaving in and out of tree-lined streets such as Braeburn Drive, Pocahontas and Patrick Henry. I then go past the Bellaire City Library on Jessamine, loop around the Bellaire Zindler Park and run South on South Rice.