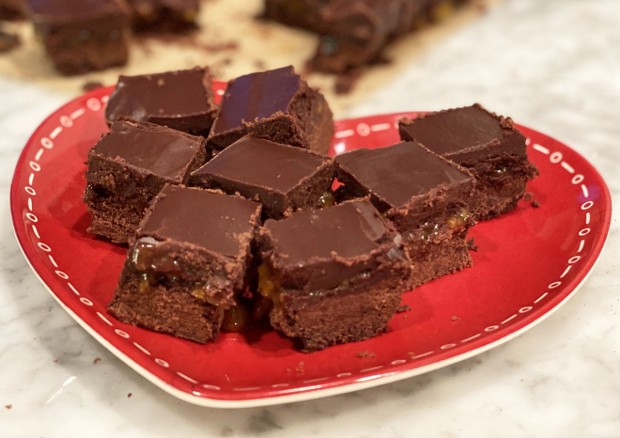 Dark Chocolate-Cherry Ganache Bars are The New York Times recipe maven Melissa Clark’s brainchild. When the idea for them popped up on the “Recommended for You” section of my New York Times Cooking app, I knew I’d be making some for Valentine’s Day, switched up with orange in place of cherry.

Melissa says the inspiration for this layered, crumbly-velvety confection came a few years after she made chocolate shortbread for her boyfriend on Valentine’s Day. She decided she needed to up the ante. “A piece of crumbly, dark chocolate shortbread is not voluptuous, like a chocolate truffle, nor seductive, like a sticky jam-filled linzer heart,” she writes in The New York Times. “No, it’s not the confection you’d usually make for your valentine, when voluptuously seductive is the order of the day.”

I beg to differ. I’ll admit I’m a sucker for good shortbread: The crumbly, almost sandy texture paired with so much butter gets me every time. Melissa’s dark chocolate version is no exception. On its own, it would be perfection.

But she’s right. When you add a layer of jam – cherry in her version, orange in mine – and a thick drape of dark chocolate ganache, that simple shortbread turns into something sublime. The crunch, the butter, the tangy fruit…and all that chocolate. Whew, this is some bar. Bonus points because it’s so easy you can have it ready for the kids when they get home from school today.

I made a couple of very small tweaks to the original, not that Melissa’s recipe needed any improvement. I’m just an orange-chocolate girl rather than a cherry-chocolate one. Also, she adds a little booze to the ganache, too sophisticated for the under-15 set’s tastes.

So here we are: A true treat of a Valentine’s Day dessert that would be treat-worthy any day.

In a food processor, pulse together the flour, sugar, cocoa powder and salt. Pulse in the butter and vanilla until the mixture just comes together into a smooth mass. Line an 8-inch square baking pan with parchment or wax paper. Press the dough into the pan. Prick all over with a fork. Chill for at least 20 minutes and up to 3 days.

Heat the oven to 325 degrees. Bake the shortbread until firm to the touch and just beginning to pull away from the sides, 35 to 40 minutes.

Cool in the pan for 20 minutes on a wire rack. Brush marmalade (or jam) over shortbread’s surface and let cool thoroughly.

Place chocolate in a heatproof bowl. In a saucepan, bring the cream to a simmer. Pour over the chocolate and whisk until smooth. Spread over shortbread. Cool to room temperature; cover and chill until firm. Slice and serve.