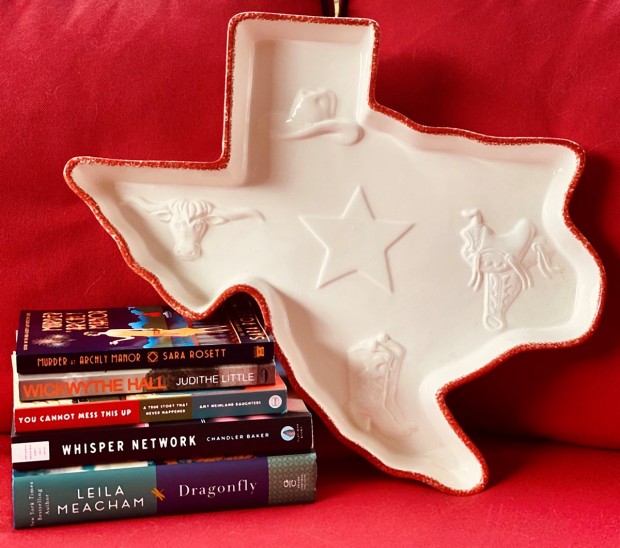 Texas is home to many fabulous authors, and Cindy Burnett highlights a few of her recent favorites.

Texas is home to many fabulous writers, and this week I thought I would focus on some of my favorite books written in the last few years by authors residing in Texas. Reading local is a great way to support the community and, frequently, these local authors enjoy visiting book clubs or other literary groups to discuss their books, which is a fun way to obtain more insight into the process of writing and the background for a particular tale.

The list of books written by Texans is quite long, but here are a few of the ones that resonated with me:

Dragonfly by Leila Meacham - Leila Meacham’s incredible World War II saga chronicles a fictional team of young Americans recruited as OSS agents to infiltrate Nazi-occupied Paris. The team is code-named Dragonfly and, upon arrival in Paris, the group disperses and sets about to fulfill their unique missions while also pursuing their own individual agendas. The genius of Dragonfly is Meacham’s ability to vividly portray German-occupied Paris and the treachery that constantly existed for those working to thwart Hitler and the Nazis. Her novel frequently proves the maxim “the best laid plans of mice and men often go awry” as each agent must quickly and intelligently adjust to the challenges and unexpected issues that regularly arise. Clever, suspenseful and character-driven, Dragonfly is a tour-de-force and a fabulous addition to the World War II genre.

Little by Edward Carey - Little is the tale of Madame Tussaud (born Anne Marie Grosholtz) from her young life as an orphan through her time at Versailles with King Louis XVI and Marie Antoinette and then ultimately as the individual who established the wax museum she is still known for today. Carey includes clever drawings of various items throughout the book relating to the subject at hand, some fascinating and others a bit macabre, and each drawing adds depth to the book. My favorite part of the book is the information and descriptions relating to Revolutionary Paris and her life at Versailles. Little is a fabulous book about an ordinary individual who left an extraordinary legacy.

Murder at Archly Manor by Sara Rosett - Rosett’s series takes place in 1920s high society England. Murder at Archly Manor is the first in a series starring the very likeable and highly entertaining Olivia Belgrave. Despite her posh upbringing, Olivia is penniless and needs a job. Hired by her aunt to investigate a man her cousin has decided to marry, Olivia attends a weekend party and witnesses a murder. She must solve the crime before someone else becomes the next victim. Word of her success travels, and Olivia finds herself drawn into numerous mysteries and high jinks. I love this era, and Sara Rosett expertly details the time and place - fashions, word usage and the manors themselves - creating an authentic and realistic series.

The Secrets We Kept by Lara Prescott – The Secrets We Kept is a fascinating tale about the United States’ role in the publication and distribution of Boris Pasternak’s Dr. Zhivago and the effects of this book on Pasternak’s family and mistress in the Cold War-era Soviet Union. Prescott’s descriptions of Soviet-era politics and state-run Gulags (where Pasternak’s mistress was sent for several years because of his book) will make readers appreciate their freedom. Prescott is a literary force whose debut has garnered numerous accolades.

Whisper Network by Chandler Baker - Baker’s debut novel, Whisper Network, is part thriller and part ripped-from-the-headlines commentary on today’s society. She tackles what it means to be a woman, particularly a working woman, in the #MeToo era while creating a whodunit with a clever and surprising resolution. Her characters are authentic, multi-faceted and human, and readers will be cheering these women on as they attempt to take down their harassing and manipulative boss. Baker’s prose is witty and dramatic, and her story will encourage working women everywhere to speak up when placed in a toxic environment.

Wickwythe Hall by Judithe Little - Little has a way with words, and readers will quickly be drawn into Wickwythe Hall. Little covers a wide range of aspects of the war deftly, and her writing is so descriptive that readers will feel as if they are waiting on the dock in Dunkirk as the soldiers arrived, walking with the French people as they fled German-occupied France, and fleeing Mers el-Kebir, Algeria as the British bombed the French ships during Operation Catapult. I was fascinated to learn about the bombing of French ships by the British during World War II, a little-known event that demonstrates the complexity and horrors of war.

You Cannot Mess This Up by Amy Weinland Daughters - Daughters’ debut novel is thought-provoking, clever, highly personal and occasionally tear-inducing – You Cannot Mess This Up will keep readers entertained from beginning to end. The time period, the 1970s, will be an added bonus for those who lived through it originally - the references, the lack of cell phones and the general way of life are accurately and often hilariously depicted. While I highly recommend this book for anyone and everyone, those individuals with strained familial relationships and dynamics will truly benefit from and take comfort in Daughters’ tale and the deconstruction of her upbringing on the rest of her life.

I would love to hear about your favorite Texas authors – feel free to comment below with your recommendations.