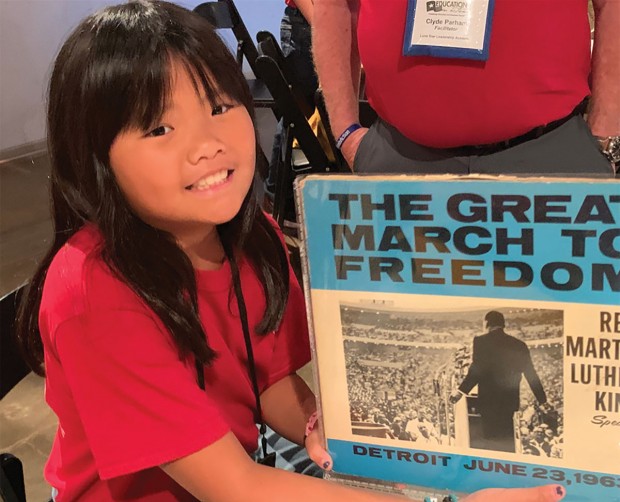 FAN OF THE MUSEUMS Cindy Tint, a fifth grader at Condit Elementary School, got out of her comfort zone at a leadership program.

Last summer for five days, I went to a program in Dallas/Fort Worth that was hosted by the Lone Star Leadership Academy. We went to museums and stockyards and, all the while, made friends with people from different places in Texas. It was a great experience, and I learned many new facts with my new friends. To reduce the scariness, I had a close friend come with me. Having her with me made the experience more fun.

One of my favorite places was the wax museum. There, they had many statues of presidents, singers like Taylor Swift, and many other famous people. They also had Marvel superhero characters. There was one part where there were flashing bright lights, skeletons, creepy clowns, and fake spiderwebs everywhere. It was terrifying, and our instructor told us to get a buddy. I held mine tight.

We also went to a rock-climbing place, and there were a bunch of things that we could climb on. There was also an area where we had to climb a rope ladder to a high platform, and we would have to jump off of it! For the people who were scared to jump, like my friend, there were also places where you would hook yourself to the rope, and you would climb up to the top. After this was over, my arms were really sore. In fact, for the next couple of days, they felt like noodles!

The visit was a once-in-a-lifetime chance for me to go places with people that I never met until that camp. It was one of the most wonderful things that I have ever done.