From high school to forever 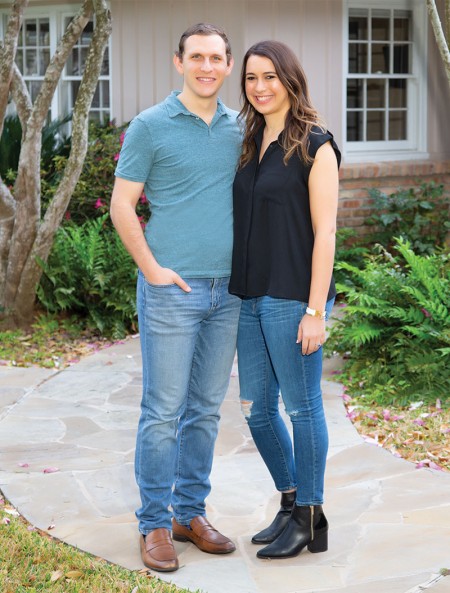 Matt Abrahams was Holli Wertheimer’s first boyfriend. She never thought he would be her only boyfriend.

But, 10 years after their first date at Fuddruckers, Holli found herself standing on a deserted beach in Chicago, excitedly accepting a marriage proposal from her first and only boyfriend.

“I definitely didn’t think at 17 that we would end up together,” says Holli, now 27. “I think Matt knew. But I didn’t even know if we’d stay together when we went to college.”

Holli, who works in administrative operations at a Chicago hospital, describes her high school self as shy and studious. In sharp contrast to Matt, an extroverted baseball player who procrastinated on schoolwork, Holli was a math whiz and editor-in-chief of the Three Penny Press, Bellaire High School’s student newspaper.

Despite their differences, Holli and Matt’s relationship seemed preordained from the start. As Matt’s mom Cindy Abrahams put it, “beshert” – a Yiddish word for destiny – seems an appropriate description for the couple’s union. Though it can refer to any auspicious event, the term is most often used to reference soulmates: fate delivering that one perfect match you are meant to spend your life with.

The connection between Holli and Matt, both 2010 Bellaire High School graduates, spans multiple generations and runs deeper than mere coincidence. For starters, Holli’s paternal grandfather and Matt’s maternal grandfather knew each other from college as well as pharmacy school decades ago. Matt’s grandfather, now 90 years old, still fondly reminisces on his time with Holli’s grandfather, who has passed away.

Then, there’s the fact that Matt and Holli met during Saturday religious classes at Congregation Beth Yeshurun, the same synagogue where each of their parents met their future spouse years earlier. Like their parents, Holli and Matt started dating when they were in high school, and, also like their parents, they attended BHS’s senior prom together.

“I just feel like all of these connections show how they’re meant to be together,” says Matt’s mother, Cindy. “There are so many similarities and connections that it just gives me a lot of confidence for their relationship.”

Holli and Matt did not necessarily ascribe the same level of significance to these connections. Neither can recall their first meeting at Beth Yeshurun. Holli simply remembers developing a strong friendship with Matt when they were in high school. Matt remembers driving Holli home from school most days because she didn’t have a car, and then asking Holli out on their first date in November 2009.

“Matt said, let’s just try it,” Holli remembers. “Austin and San Antonio aren’t that far apart. We said if we aren’t happy, we’d reassess and go from there.” 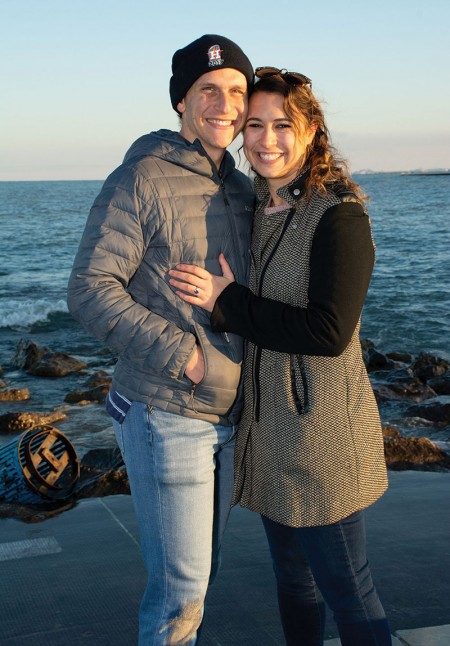 THE PROPOSAL Matt Abrahams surprised Holli Wertheimer with a marriage proposal 10 years after the couple first started dating as Bellaire High School students. Here, the newly engaged couple are at the site of their engagement – a beach in Chicago.

But Matt never felt the need to reassess. While Holli thought it would be wise to date other people, Matt seemed to have a sixth sense, or simply a resolution, that Holli was the one.

Even post-grad, when the challenges of assimilating to a job and the realities of adulthood strained their relationship, Matt was unwavering in his belief in the couple. After college, Holli landed an intense job as a management consultant in Dallas, and Matt became an analyst at a Houston investment firm. Matt says the job took his focus and he did not make enough of an effort to be present in Holli’s life.

“I think we just saw the world differently,” Matt says. “To [Holli], if she was going to date someone, she needed them to call and make more of an effort. To me, we had been doing long-distance in college, and I was used to the ‘I’ll see you when I see you.’”

When Holli expressed doubts to Matt, he was quick to adapt. “She’d say, this isn’t working for me, and my response was, okay let’s make it work,” Matt says.

Far from her shy teenage years, Holli has grown into a confident and animated woman. Holli is the one who decides where the couple goes to brunch on Saturday mornings, with Matt happily coming along; she’s the one hosting potlucks with their group of friends, with Matt admiring Holli’s inclusiveness and large heart. She’s hard-working and ambitious, and her reverence for Matt belies any instances when she may have second-guessed the relationship.

“What I love about Matt is that he sees me as the best version of myself every day, especially on the days that I don’t feel like I look my best or act my best,” says Holli. “And I just think he’s really cute. He’s adorable and awkward and funny. He’s got these beautiful blue eyes and a great smile.”

“Matt checked some, but not all, of the boxes,” Holli admits. “When I finally just accepted Matt for who he is, I stopped wondering and didn’t have those ideas anymore. I like the person I am with him. We’re always laughing.”

In 2016, Holli accepted a job in Chicago, putting hundreds of miles between her and Matt. Matt says the longer distance hardly made a difference, though, for the couple had already spent six years apart and were fluent in the technologies that shortened the distance. Each night, they FaceTimed, often falling asleep watching TV together.

Holli wanted Matt to move to join her in Chicago, but Matt, a homebody, was reluctant to make the move. The couple agreed they’d eventually settle in Houston, but Holli – an adventurer who loves to travel – wanted more time in Chicago.

They continued apart for another two years, until Matt took the plunge and moved to Chicago last summer. From that point, it was just a matter of when, not if, the couple would get engaged. Holli says they had discussed getting engaged when they were both 27, and Holli, who turns 28 this July, figured Matt would wait right up until the last minute to get down on one knee.

Matt, however, was not waiting for any kind of deadline. Though he’s not usually the planner in the relationship, he had the proposal in the works. In August, Matt told his parents of his plans to propose in November, on their 10-year dating anniversary. He began ring-shopping and formally requested Miles Wertheimer’s permission for his daughter’s hand in marriage.

Matt then masterfully coordinated to have everyone – his parents and Holli’s parents, plus some close friends – fly up to Chicago to surprise Holli the Friday before Thanksgiving, the day he would propose.

The couple typically takes a day off during the week of their dating anniversary. They had both planned to take off on Friday, Nov. 22, but at the last minute, Holli had to go into work that day.

Unbeknownst to Holli, Matt spent that entire day sitting nervously at home, practicing the proposal and waiting until it was time to pick up Holli. Right around 3 p.m., Holli received a text from Matt saying he was down in the lobby of her building.

“I come down, and he says he’s booking an Uber and not telling me where we’re going,” Holli says. “We pull up to the Museum of Science and Industry. And I’m thinking, oh that’s a good idea, we’ve been wanting to go there.”

But that was not where they were going.

Wearing coats and scarves in the 35-degree Chicago chill, they exited the Uber, and Matt walked Holli to the last place she thought she was going: an isolated beach.

“We get there, and I see two photographers standing on the rocks,” Holli recalls. That’s when she realizes what’s about to happen. “I’m like, okay, we are doing this.”

In the background of their 10-year relationship, Holli and Matt’s parents were acting as cheerleaders.

Both sets of parents had themselves married their first loves and therefore seemed to grasp the nature of Holli and Matt’s relationship.

Holli’s mom, Mindy Ehrenkranz, met her future husband, Miles Wertheimer, at Saturday Hebrew school at Beth Yeshurun in 1970. He’d bring her extra goodies from the corner pantry and was always the nicest guy in the room. In 1977, the couple went on a teen trip to Israel together.

“That’s when we really connected,” Mindy says. “We started to develop a deeper friendship.”

Mindy invited Miles to her senior prom at Bellaire High School, but Miles, who lived in Rosenberg and attended Lamar Consolidated High School, did not return the favor. Still, Mindy and Miles remained friends through college – Mindy at UT and Miles at Tulane – while dating other people.

A few years after graduating, Mindy ran into Miles at a party in Houston. As Mindy remembers it, Miles was ecstatic to see Mindy and scooped her up off the ground.

A year and half later, the couple was engaged. 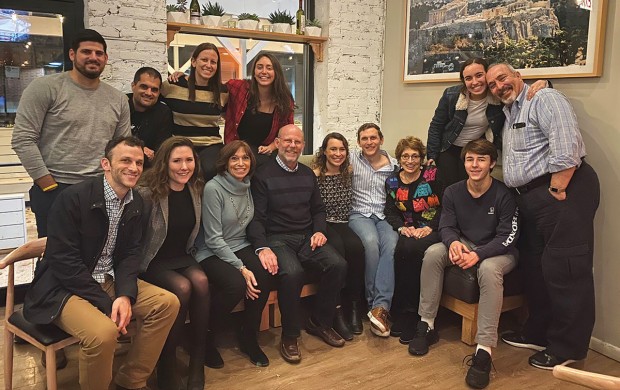 About 10 years earlier, another love story was panning out in a similar fashion. Once again at Beth Yeshurun, Matt’s mom Cindy Gerson met her future husband Jeff Abrahams.

Cindy and Jeff attended BHS together and started dating their sophomore year. Eerily, Cindy’s thoughts about her relationship are similar to what Holli’s would later be: “I don’t think anybody, when they’re 16, expects that they’re getting married,” says Cindy, explaining that she had no expectations for the relationship.

But, Cindy and Jeff did tie the knot. The two went to UT together and got married the month after they graduated from college in 1980.

“The longer they were together, the more I felt their love was growing,” said Mindy. “In May of last year, I told Matt, I don’t know when the day will finally come for you two, but I will tell you this: you are officially in my family.”

In Matt’s eyes, all of the overlaps between the two families – while conducive to a strong relationship – are not the reason he and Holli are still together. He says he and Holli made a conscious decision. They chose each other not because of their similar religious backgrounds or families, but because of their mutual love.

“I love that she gets me,” Matt says. “I think I’ve always viewed myself as the ‘reacher’ in this relationship, but she makes me feel like she’s the reacher. And I love the fact that she’s always kind to her neighbor and always reaching out to make other people feel comfortable. She puts other people before herself.

“We are doing this because we really want it. That said, it’s pretty cool that we never had trouble integrating our families, and it’s been nice to see how much joy we’ve brought to our parents by bringing people we know they’ll like into their lives. We joke that if we split up, Holli’s mom would choose me, and my mom would choose her.” 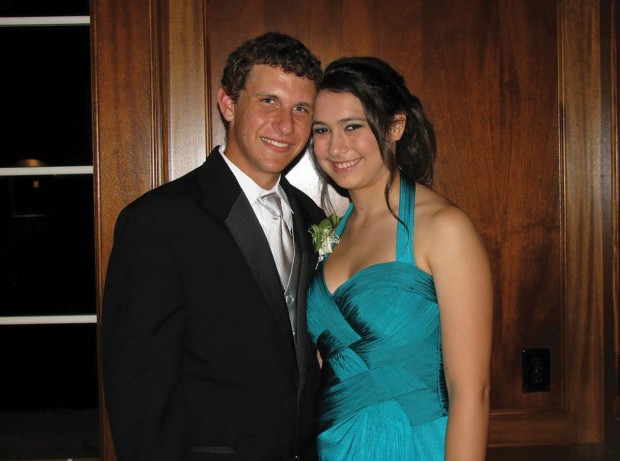 Holli Wertheimer and Matt Abrahams attended senior prom together in 2010. 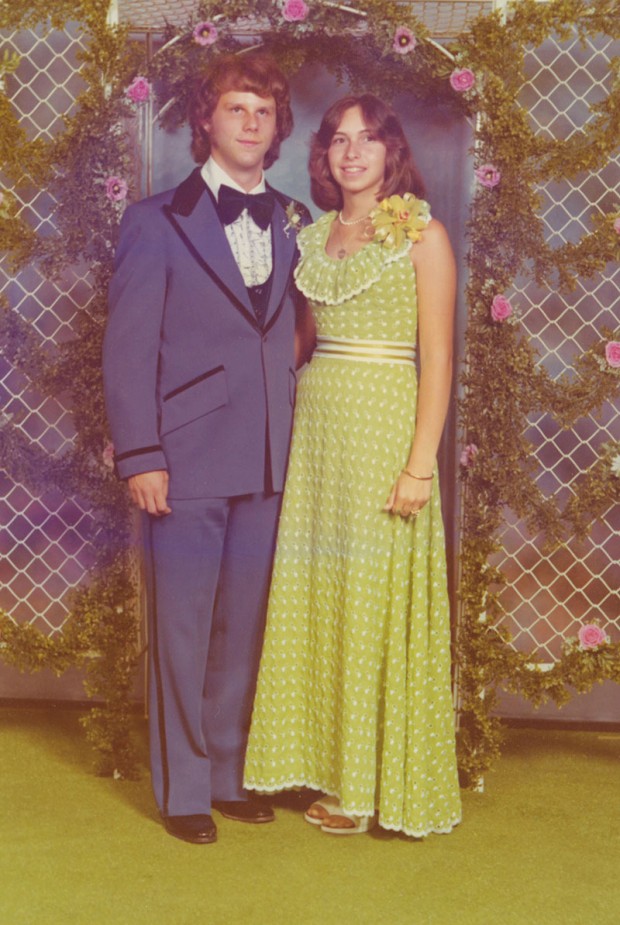 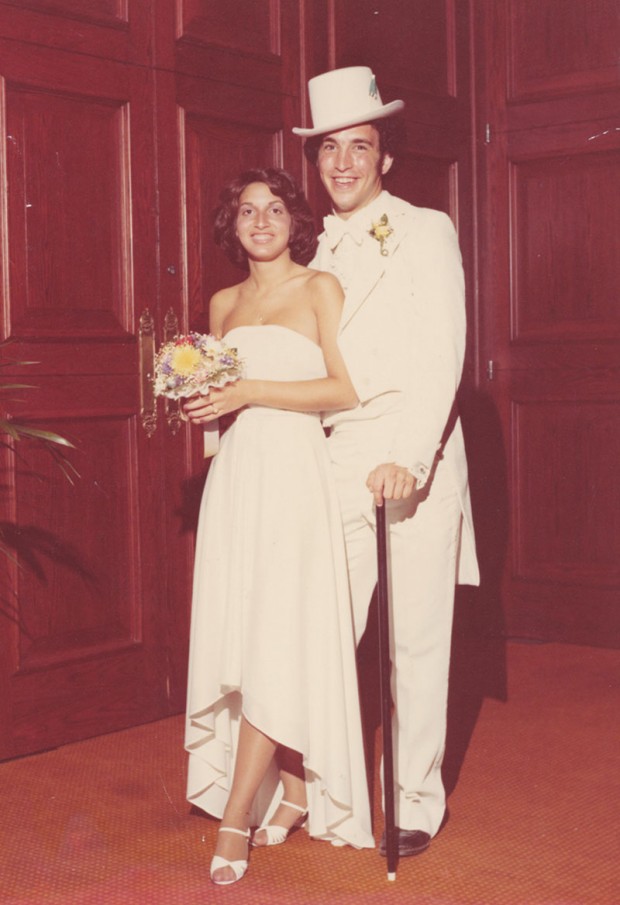