Read it! Don’t Stream It 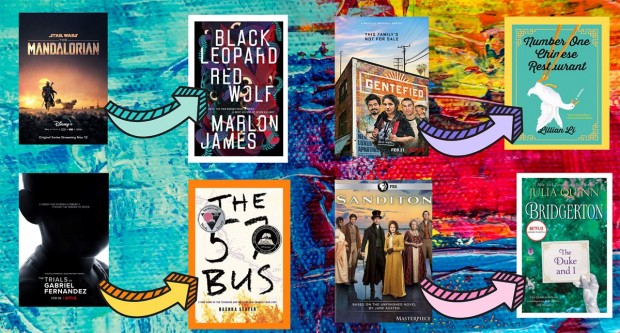 Since we’re all staying at home for the next couple of weeks, I’ll freely admit it - I will be guilty of binge-watching shows. Gasp! I know, I work for the library and I do something besides read?

Well, when streaming platforms auto play the next episode, is it even a choice?

Whenever you are ready to take a break from your streaming apps and binge watching, I have a few titles to add your “To Read List” based on bingeworthy shows.

Being the Star Wars fan that I am, The Mandalorian was on my to-watch list before it premiered on Disney Plus. I was blown away with the show’s great mix of science fiction, fantasy, western, and world building. Most importantly, The Mandalorian gave us The Child aka Baby Yoda aka the cutest being in the entire galaxy. If you’re like me and can’t wait for season two, read Black Leopard, Red Wolf by Marlon James. This epic Afrofuturism fantasy involves a large cast of characters, dangerous creatures, exotic settings, and adventure as a mercenary known as Tracker is hired to find a mysterious boy.

I just finished binge-watching Gentefied this past weekend. I was utterly enchanted with the show, especially with the avid library user Erik aka Li’Bro. After watching all ten episodes not only did I crave some tacos, but some more stories about family dynamics. I found the perfect book to pair with Gentefied, Number One Chinese Restaurant by Lillian Li. Both are centered on a family owned restaurant that is a staple to the community and lives of the family members running the restaurant. Delicious family drama and humor sprinkled throughout, Number One Chinese Restaurant is one satisfying read.

Like Phoebe Buffay from Friends, I hate PBS. Not really, but I am upset with Masterpiece Theater over the ending of Sandition. I won’t spoil the series for you, but instead suggest you read Julia Quinn’s The Duke and I, the first book in the Bridgerton series. Like Sandition, The Duke and I is set during the Regency period with a large cast of characters, but we only really care about the courtship between the bantering leads. The Duke and I is the perfect read to follow the disappointment of Sandition, and later this year you’ll be able to binge watch the Netflix adaption from Grey’s Anatomy showrunner Shonda Rhimes.

Give me a good true crime docuseries to stream and you’ll won’t see me for a day. If, like me, you become engrossed in not only the crime that occurs, but also books that raise questions about society, race, or the justice system, read The 57 Bus by Dashka Slater. This true crime novels follows the lives of two teens: Sasha, a white agender teen, and Richard, an African American teen, and the eight minutes on the 57 bus that will change their lives forever.

Remember, books don’t have auto play, so when it’s late be sure to flip the page because it’s “just one more chapter.”

All titles are available in eBook and eAudio format on OverDrive.