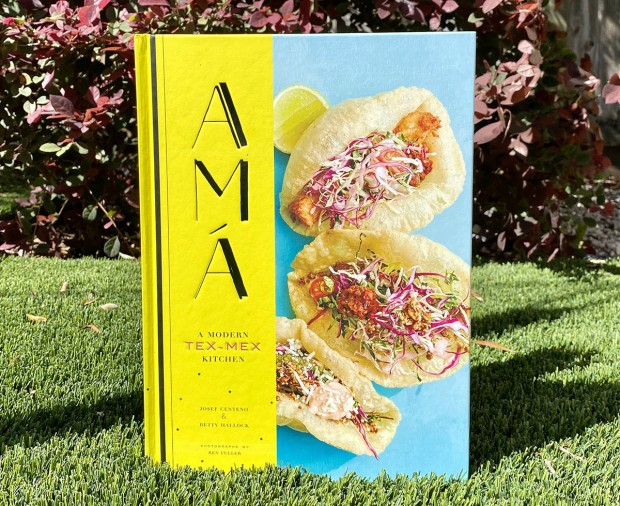 This week, Buzz writer Andria Frankfort and I are collaborating again with a cookbook review and recipe test combination (Andria will share a recipe in her Back Porch Table column soon). I love working together on these cookbook articles and am particularly excited about this one because this week’s selection, Amá: A Modern Tex-Mex Kitchen, focuses on Tex-Mex recipes. While he now lives in Los Angeles, the author/chef grew up in San Antonio and hails from fourth-generation Texans. Tex-Mex is a personal favorite of mine, and I savored the experience of reading through the recipes and learning about his inspiration for the cookbook.

Josef Centeno currently runs a restaurant called Bar Amá, described in the cookbook as “a small, noisy, friendly Tex-Mex joint, not in Texas but in the center of downtown Los Angeles.” Named after his great-grandmother, the restaurant provides Tex-Mex dishes that honor his family and his roots. Some recipes are ones his family cooked and others are his take on present-day Tex-Mex. The success of his restaurant led him to want to share the recipes to a wider group, so he decided to create this cookbook, which he also named after his great-grandmother. Prior to opening Bar Amá, Centeno cooked for Michelin three-star chefs in San Francisco, Santa Cruz and New York City across a variety of cuisines including French, Spanish and Japanese. These previous jobs inspire some of the recipes in Amá: A Modern Tex-Mex Kitchen.

The cookbook is separated into seven sections: Larder, Tex-Mex Breakfast, Amá’s Table, Verduras, LA Reunion, Super Nacho Hour, and Dulces and Desserts. Each section is peppered with anecdotes related to his youth and family in San Antonio adding a highly personal and unique element to the cookbook. He also includes an introduction that explains his return to Tex-Mex cuisine and provides a brief history of his family in Texas.

My favorite section is the Super Nacho Hour, which includes recipes for queso, guacamole, tortilla chips, chalupas, nachos (of course), and much more. He even includes a recipe for Carne Guisada Frito Pie and provides the interesting tidbit that Fritos were invented in San Antonio, a fact that I did not know: “Fritos are a San Antonion delicacy, invented by Gustavo Olguin, who sold the recipe to the owner of a local confectionery shop for one hundred dollars during the Great Depression. That guy then created the chip empire known as Frito-Lay.” The recipes that appeal to me the most in this section are the Corn Quesadillas, made with three kinds of cheeses, corn and roasted poblano chiles, and the lobster taquitos, made with lobster, cream cheese and melted cheddar. This section also includes some creatively-named mixed drinks, including The Nacho –“a spicy-sweet-tart chile lime shrub really punches up this version of a margarita, named after the adult film star Nacho Vidal, who is reportedly a fan of nachos.”

The illustrations accompanying the recipes are spectacular and will entice both makes readers hungry and inspire them to cook the various dishes. Check back soon for Andria Frankfort’s Back Porch Table, where she’ll share a recipe from this cookbook.

Bored at home and want to discuss books with people over Zoom? Conversations from a Page is running two Curated Book Discussions on April 7 (American Dirt) and April 14 (In Five Years) at 11 a.m. Email [email protected] for more info. For more book recommendations and bookish thoughts, see @ThoughtsFromaPage on Instagram or Cindy’s Reading Recs.