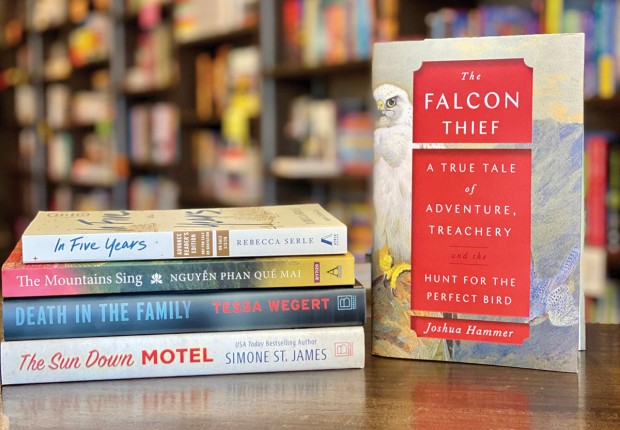 WHAT TO READ This month's picks include a ghost story, the start to a new mystery series, a family saga set in Vietnam, a nonfiction account of obsession, and a tale about fate.

Death in the Family by Tessa Wegert: Tessa Wegert’s brilliant debut opens with an Agatha Christie-style premise – an isolated property, a missing man, a blood-soaked bed and room, and a defined group of people on the private island. The police are called out to the island just as a terrible storm is brewing, trapping the investigators in the house with a cast of unlikeable characters. As they attempt to determine what happened to the missing individual, people start dying. Terrifically atmospheric, Death in the Family is a solid and creative mystery with intriguing character development and a cliffhanger ending. This is the start of a promising new series.

The Falcon Thief: A True Tale of Adventure, Treachery, and the Hunt for the Perfect Bird by Joshua Hammer: This is a fascinating true tale about a man, Jeffrey Lendrum, who spent his life stealing and smuggling rare bird eggs, and the UK detective, Andy McWilliam, who eventually brought Lendrum to justice. The story is a mix of adventure, history, and true crime and provides a glimpse into the world of rare-bird and rare-egg obsession. The Falcon Thief spans the globe from the Middle East to Canada to Africa to the United Kingdom. Reading about the detrimental impact on numerous bird species and the singular focus and obsession demonstrated by those involved in egg theft and bird capture was both depressing and mind boggling. Once I started this book, I could not put it down.

In Five Years by Rebecca Serle: What would you do if you had a brief glimpse into the future and saw that you were living a completely different life than the one you were currently living?  In Five Years tackles this topic when Dannie falls asleep and wakes up five years in the future with a different engagement ring, a new apartment, and another man in this new apartment. After spending an hour in the future, Dannie falls back asleep and returns to her regular, present-day life. She is shaken by this fateful hour in the future and struggles to return to her structured life, continually wondering if what she experienced was a dream, a vision or something else entirely. The premise for this book is original, and Serle’s execution of the concept is both clever and thought-provoking. I highly recommend this one.

The Mountains Sing by Nguyen Phan Que Mai: Beautifully and lyrically written, Nguyen Phan Que Mai’s English debut follows multiple generations of the Tran family against the backdrop of Vietnam’s heartrending 20th-century history. From the rise of the Communist government in North Vietnam to the years of conflict during the war itself, The Mountains Sing is historical fiction at its finest – it highlights the impact and cost of the events that led up to the Vietnam War from the Vietnamese people’s perspective while interweaving in the language and traditions of their culture. The Mountains Sing is not only a glimpse into Vietnam, but is also a cautionary tale about the impact of a decades-long conflict on the people living through it. I needed lots of tissues, and the Tran family’s experiences will stay with me for a long time.

The Sun Down Motel, by Simone St. James: The Sun Down Motel is a creepy, rundown motel serving as a pit stop for travelers on their way through Fell, New York, that also provides a place for locals to hide out. But as Viv and Carly, two women 35 years apart, learn, there is someone or something else living at the Sun Down, and they both are determined to find out who or what is haunting the motel and why.  While it is a ghost story, the book is awesomely creepy but not overly scary. The Sun Down Motel is one of the best books I have read in a while. The characters are so well developed, and I rooted for both Viv and Carly as they sought to understand what was happening at The Sun Down Motel.

Editor’s note: Southside Place resident Cindy Burnett also writes our weekly Page Turners column. She is co-creator of the Houston literary event series Conversations from the Page, runs the Instagram account Thoughts from a Page, contributes to bookreporter.com and shereads.com, and regularly speaks to groups about books.