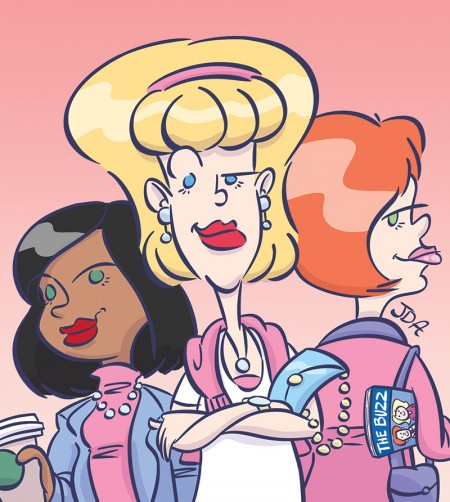 A ROUGH CROWD Most mean girls grow out of their mean stages – but sometimes not. (Illustration: behance.net/runamokstudios)

Regina George is alive and well, right here in Houston. Actually, the meanest mean girl in Tina Fey’s musical (also a 2004 movie) of that name – Mean Girls – lives in every high school and middle school, every PTO and club, even many senior living communities (more on that in a minute).

If you ever were a girl, or if you’ve been a girl mom, or even if you know some girls, you will be able to name the Regina George(s) in your world. They’re the ones seeming to have it all together, running the cliques, setting the rules. They’re telling us we can only hang out with their group if we sit at a specified lunch table, turning corners of classrooms into exclusive domains.

That’s not to say that Regina doesn’t have her boy counterpoint. In fact, a University of Georgia study found it’s often the boys who are spreading rumors and excluding peers. We’ll look at that another time.

I always wondered about my mom’s inability to forget a mean girl incident I dealt with in fifth grade. I don’t even remember what happened, but a girl said something unkind to me (or at least I interpreted it that way), and I came home crying. (It could have been about my frizzy hair that I’d tried unsuccessfully to plaster down by wrapping it around an empty frozen orange juice can while sleeping, but that’s not the point.)

This girl and I are dear friends now, and neither of us remembers the encounter. But my mother is never going to forget, and when my girls – her granddaughters – complained over the years about not-so-nice girls, she’d say, “Well, you know your mom’s friend [so-and-so] was so mean to her in fifth grade.” Let it go, I’d think silently as I turned my head to roll my eyes.

But then these moments started happening in my own girls’ lives. And I’ll tell you: I will never forget the girl who greeted one of my children with, “That’s a really ugly dress,” at a seventh-grade party. I won’t forget the girl who told one of my girls she just didn’t have enough room in her house to let her come to the party. I will definitely never forget the girl who tried to teach my daughter the cool way to walk so that she could be friends with her. These girls may – probably will – grow into incredible women and supportive friends, maybe for my girls, and I will love them. But I won’t forget.

The funny part of it, though, the part I really don’t get, is the part where the moms are right there in the middle of things. When they’re watching all of this happening, and they’re turning their heads. Or worse, they’re doing it to each other. Aren’t we supposed to be telling our girls they’d better be nice to everyone – or else!?

My friend Betsy Rapoport edited Rosalind Wiseman’s 2002 Queen Bees and Wannabes (the book that Mean Girls the movie and the musical were based on), and she co-authored Queen Bee Moms & Kingpin Dads, the one “about the awful parents,” as she puts it. I thought she might have a little insight.

“Middle and high school are brutal times,” Betsy says. “Everyone is trying to solidify their social standing. Being cast out of your peer group is so terrifying that girls will do almost anything, including selling out their friends, to stay included.

“Unfortunately, Queen Bee girls often grow up to be Queen Bee Moms. They don’t outgrow the desire to stay on top of the social hierarchy, because it feels almost literally life-threatening to be demoted or ignored. When you don’t own or feel your own real power, too often you’ll opt for the bogus power of bossing other people around.”

Back to that senior living home. A friend tells us that her mother, who is 92, will only play cards or dine with a small, exclusive group of women. “I’m always embarrassed,” the daughter says, “because people will ask me to ask my mom to invite their parent or friend who is new to the nursing home to dinner or for a visit. I feel awful because I’ll ask, but I know she’s set in her ways.”

Like the rest of us, the Regina Georges out there grow up. Sometimes, hopefully, they grow out of their Queen Bee roles. But I won’t be too surprised if we’re all sitting around the card table in our 90s, still trying to figure it all out.