Reads to Help You Embrace (or Escape) the New Reality

By Delia Swanner , Contributing writer | April 28, 2020
Book Buzz
Sign in to buzz me about Book Buzz
Click the Buzz Me button to receive email notifications when this writer publishes a new article or a new article in this column is published. 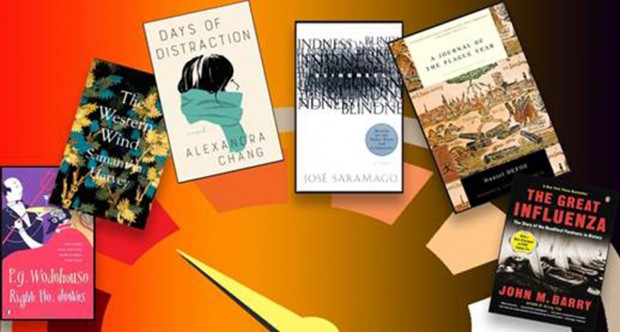 You may find yourself with extra time on your hands these days. Delia Swanner, Youth Program Librarian, offers a range of book recommendations for whatever the mood calls for.

In these unprecedented times, some seek comfort while others seek insight to help cope with the new reality. As a public library, we aim to serve all — and with that in mind, I’ve compiled a short list of books for whichever the mood or need calls for.

Everyone has time on their recently washed hands, and if you’re interested in learning more about the history of epidemics and pandemics I’ve recommend some titles for you:

While the current pandemic is terrible, it is nowhere near the scale of what the bubonic plague was for 17th century Europe. The Journal of the Plague Year, by William Defoe, published in 1722, is set in 1665 amidst the Great Plague of London, and is widely considered the first historical  novel in English. This would also appeal to history buffs as it contains verisimilitude and details of life during that time period.

The last time in our recent history when the world shared a similar crisis was during the Spanish Flu. The Great Influenza  by John Barry  (2004), recounts a fascinating  history and evidence-based  narrative with medical research about the  horrifying  scourge that killed millions of people in 1918.  If history is any indication, it may serve as solace as how the medical and scientific community attempt to understand and contain an infectious and deadly disease.

Blindness, by Nobel Prize winning author, Jose  Saramago, is set in  an indeterminate present, whereby a mysterious plague strikes its victims suddenly blind. While it paints a grim vision of human nature, there are elements of humor, adventure, and romance with a happy ending.

For some of us, we might desire something else from the collective anxiety and immerse ourselves into pure escapism. For light-hearted, witty, clever romps with young British aristocracy in the care-free 1920’s, read anything by P.G. Wodehouse. I recommend beginning with the dim-witted Wooster and his trusty butler Jeeves in Right Ho, Jeeves!  Wooster relies on Jeeves to maintain his happy-go-lucky bachelorhood and unravel his silly predicaments. Q

Alexandra Chang’s Days of Distraction is set in the present-day with all the technological, political, sociological and economic contemporary issues and challenges that readers will recognize. It centers around a young Chinese American woman who leaves her tech job in San Francisco to search for herself in a small town. With tenderness and amusement, we experience the same dramatic changes and uncertainty as the narrator. Possibly just what we need right now.

For both historical novel enthusiasts and mystery lovers, we have both in Samantha Harvey’s The Western Wind. Set in a medieval English village in 1491, the body of a generous benefactor is found and a local cleric plays the detective. With vivid and accurate descriptions of daily life in the time period, the novel is also riveting and suspenseful while engaging themes of spirituality and questions of moral resiliency during times of long-term hardship. The novel offers both a portal of historical escapism while examining human nature.

Whichever mood you’re in, we have these titles and more are available online to help you cope, grow or escape and enjoy your time at home.

The Market at Sawyer Yards

6:00 pm to 10:00 pm
Location:
The Market at Sawyer Yards
END_OF_DOCUMENT_TOKEN_TO_BE_REPLACED