From Texas to Tinseltown: 'The Lost Husband' Premieres 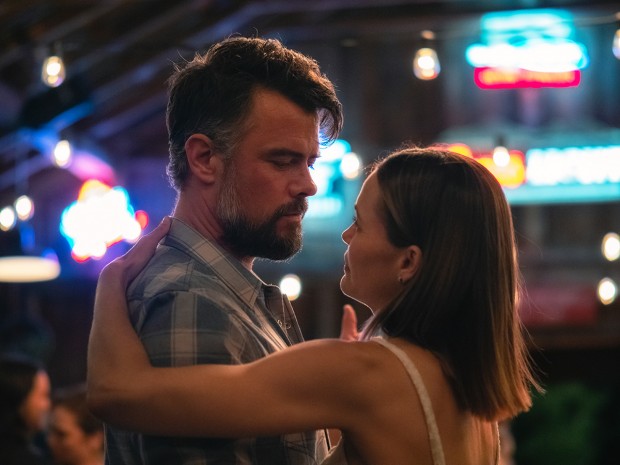 The story is getting juicy when O’Connor (Josh Duhamel) gazes into Libby’s (Leslie Bibb) eyes on the dance floor. (Photo: Six Foot Pictures)

Weddings, graduations, galas, sports seasons, concerts . . . we’ve all heard the long laundry list of events that have been cancelled due to the coronavirus pandemic. One such event was the Hollywood screening of The Lost Husband, based on New York Times bestselling author Katherine Center’s novel by the same name.

The movie, which is about love found on a goat farm, stars Leslie Bibb (Talladega Nights, Iron Man), Josh Duhamel (Transformers, Unsolved: Murders of Tupac & Notorious B.I.G) and Nora Dunn (Saturday Night Live). The April 10 red-carpet premiere, which was to take place in a Los Angeles theater and release to 25 city movie theaters, had to be cancelled. Although The Lost Husband wasn’t released as planned, it was still released and can be streamed on services such as Apple TV, Amazon Prime, VDU and Comcast. 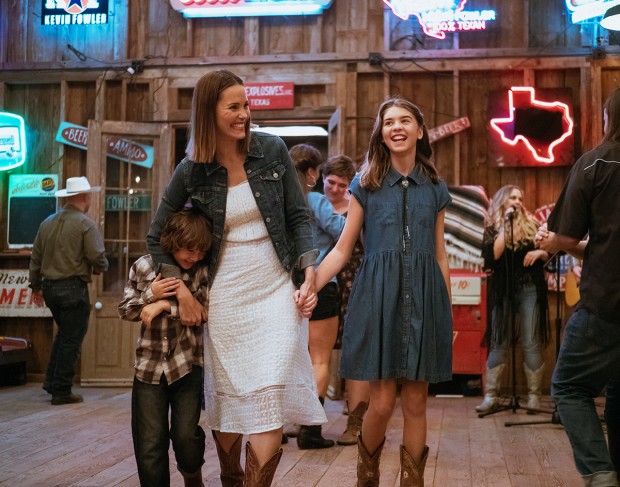 The Lost Husband, published in 2013, is the fourth of Katherine’s six published novels. Her many fans love her compelling stories about love and family with heroines who often use humor to overcome hardships. In the film, Libby, a mother of two, is struggling financially and emotionally after her husband dies. The family moves from Houston to the Texas Hill Country to find work and a free place to stay at her estranged aunt’s goat farm. 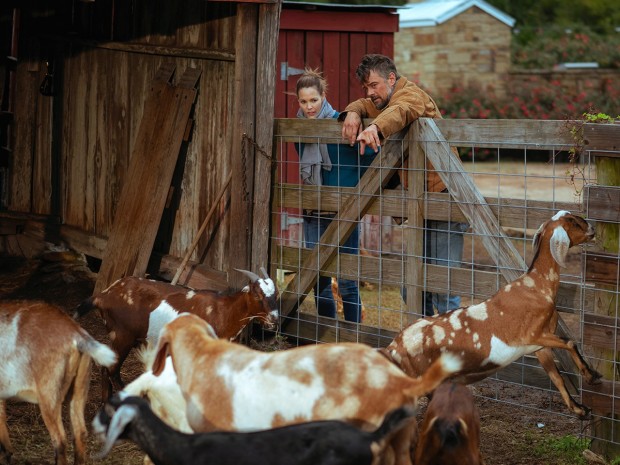 The unique setting was inspired by Katherine’s lifelong family friend, Christian Seger. Katherine and Christian grew up together in Afton Oaks and were preschool partners in crime at Pooh Corner. In 2006, Christian and his wife, Lisa, moved an hour northwest of Houston to open Blue Heron Farm. In the early years of the farm, Katherine and her children, Anna and Thomas, who were young at the time, took a road trip to visit the Segers and their herd of Nubian goats.

Katherine said, “I was completely blown away by how charming the farm was.”

The book was released in 2013 and became a New York Times bestseller. Those Blue Heron Farm adorable goats inspired many elements of The Lost Husband, she said. 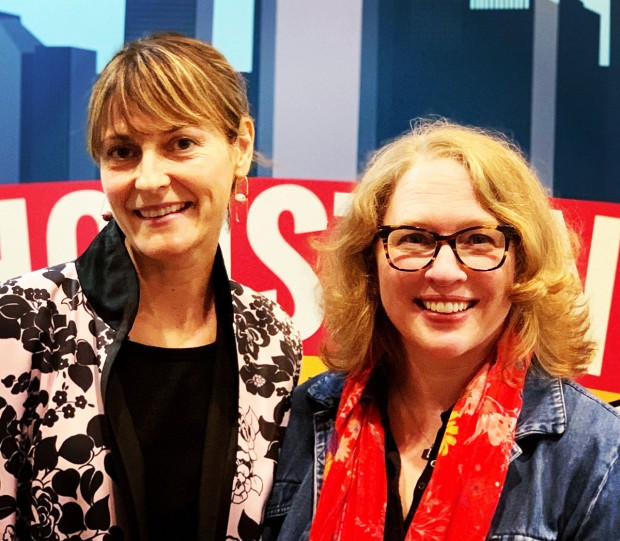 Another key factor in The Lost Husband’s book-to-big-screen journey was St. John’s School. Katherine is a 1990 alumni of SJS and her children have followed in their mom’s academic footsteps. Anna is currently a junior, Thomas is an eighth grader and Katherine’s husband, Gordon, was a middle school history teacher at SJS for years.

Thomas’ classmate, eighth grader Lyall Wight, has attended school with Thomas since kindergarten so parents Vicky and Gordon Wight have connected with Katherine and Gordon Center. Six years ago, a friend gave Vicky a copy of The Lost Husband. Vicky, who has a background in film production, instantly knew she wanted to write and direct the movie adaptation.

Vicky directed the movie and wrote the screenplay. The movie was filmed on locations around Austin, Wimberley and Round Top to give a real taste of the Texas Hill Country. 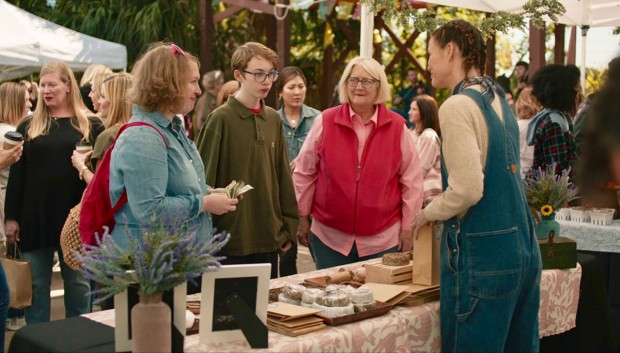 Getting ready for their close-up, Katherine, her son Thomas and mom Deborah Detering enjoyed spending time on location in Austin being extras for a farmers market scene. (Photo: Six Foot Pictures)

The Center family, including Katherine’s mom, Deborah Detering, appeared as extras in a farmers market scene filmed in Austin.

“Acting is a lot more difficult than you think,” Katherine laughed. “Being an extra is really hard because you have to act like you’re doing normal things but without making any noise.”

Skipping out on the April 10 red-carpet experience was disappointing, but always the creative optimist, Katherine figured out a plan B from her West U home.

“We did a ‘virtual premiere’ with mostly St. John’s moms. We didn’t actually watch the movie together - just gathered on Zoom on the premiere day with about 70 pals and some champagne. Vicky and I had a conversation about the movie, and Nora Dunn, who stars as Aunt Jean, joined us. It was lots of fun! Producer Bridget Stokes was also on the call.”

Friend Bryn Larsen helped get the premiere party started by dropping off a care package of popcorn and champagne. 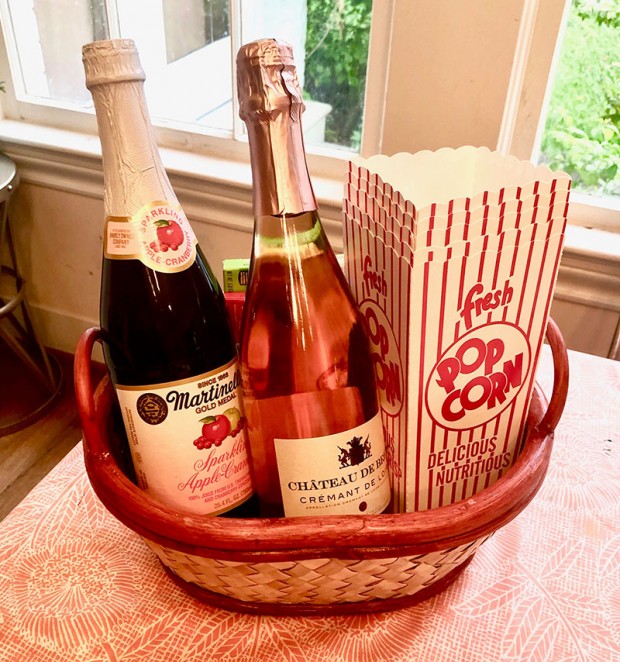 Friend Bryn Larsen helped make the movie premiere celebration lively by dropping off a care package of movie popcorn and bottles of bubbly (champagne for the adults, sparkling cider for the kids).

Later that evening, Katherine had a second Zoom screening. “I ‘gathered’ with my sisters’ families and my mom, and we watched the movie at the same time while video conferencing on Google Hangouts, which made me feel like we all watched it together. Very fun!”

She said it was also fun to watch Josh Duhamel giving interviews on various talk shows, promoting the movie.

Katherine said she was really happy with the way that The Lost Husband was able to capture the real essence of “Texan-ness” as it was something she was passionate about conveying when she wrote the book. Katherine said she hopes that although we may be stuck at home, watching The Lost Husband might be a nice escape, transporting viewers into the lovely, heartwarming places in the movie. 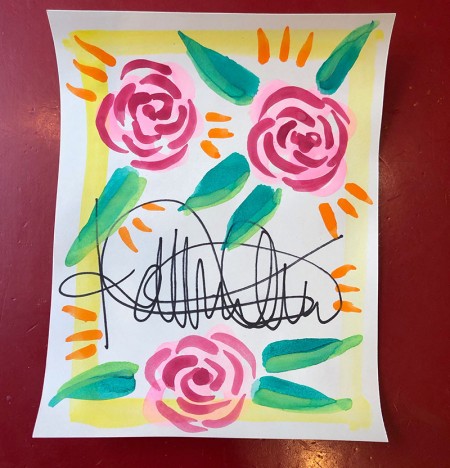 One of the bookplates Katherine has hand-painted and signed as a thank you to readers who order her books through Blue Willow Bookshop (while supplies last).

Besides watching The Lost Husband, Katherine shared how she and her family have been keeping busy during quarantine.

“We’ve been growing a pandemic garden - in other words, using this extra time to plant the backyard garden we’ve always meant to plant - watching Korean dramas (with subtitles), folding tons of laundry, sewing masks to donate, and painting bookplates for Blue Willow Bookshop.”

Katherine is making hand-painted, signed bookplates for Blue Willow through August (while supplies last). “Every book [by Katherine] (including pre-orders of my new book, What You Wish For) that you order through Blue Willow will come shipped with a hand-painted bookplate to paste in. They are all different and unique.”

“This pandemic has come just as independent bookstores were experiencing a resurgence,” Katherine said. “People who love books and book culture have to look sharp! Nobody wants to wake up on the other side of the pandemic and find all our beloved bookstores gone. We’ve got to do whatever we can to support them.”

Katherine’s next book, What You Wish For, is set to release July 14. The book is about a school librarian in Galveston.

See details about how to watch The Lost Husband here.