Armchair travel with the Harbisons 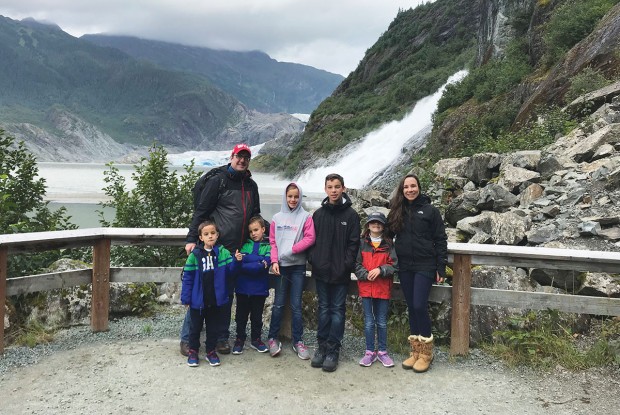 Taking a moment from their exploration of Mendenhall Glacier to strike a pose are (from left) Matthew, with twins Aspen and Xavier, Natalia, Gabriel, Alanna and Rocio.

Rocio and Matthew Harbison have been traveling with their five kids since the children have been old enough to pop into a baby carrier. They’ve been to Hawaii and Alaska, New York and Colorado, England and France and Holland. And of course they’ve been to Rocio’s native Puerto Rico many, many times.

So it was with great excitement that they looked forward to Spring Break 2020, planning their first trip together to Asia: to Tokyo, at the height of cherry blossom season, for the Olympics.

And then… coronavirus was all over the news. They looked for destinations closer to home, thinking maybe that would be safe. But it didn’t take long to realize – especially as Rocio and Matthew are both medical doctors – that it was time to do the responsible thing and set an example. Spring Break 2020 would be spent at home.

So it was that during this Spring Break, they all sat down together at the kitchen table – in the way that many of us are becoming more accustomed to these days, via video chat – and relived some favorite travel memories with The Buzz. Rocio and Matthew took a break from their telemedicine sessions, and the kids took turns sharing highlights of their Alaska trip in particular. 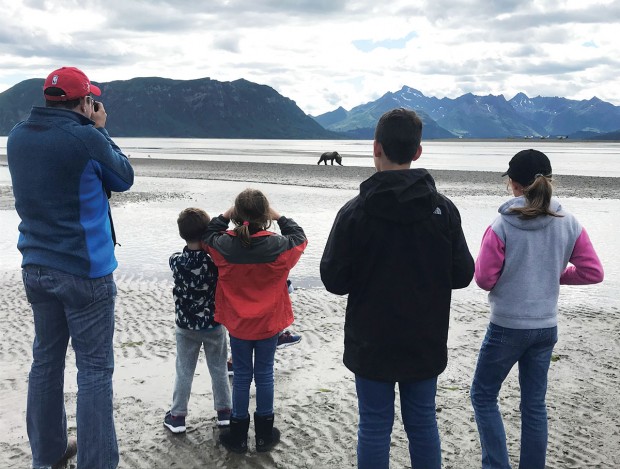 The Harbison family was able to observe brown bears fishing for salmon on Chinitna Bay on the Kenai Peninsula.

It all began 14 years ago with Gabriel, who was joined three years later by Natalia, now 11, and then Alanna, now 9. Traveling with three little ones didn’t slow them down, and when twins Xavier and Aspen, now 8, came along, they just kept going.

They wanted to give their kids a global education, to introduce them to different cultures, landscapes and ways of life. Because they both travel a lot for their work, they accumulate a lot of frequent flier miles, and so the kids can fly for free.

They started with shorter trips, to get them accustomed to the idea. “We were really working with our kids to get them used to the travel routine – how to get on a plane, how to take care of your backpack, how to be a little more self-sufficient,” said Matthew.

A week in Hawaii was their first long-haul trip, where they went to celebrate Rocio’s birthday with a luau. They spent time on the Big Island, swimming with dolphins and sea turtles, and they were hooked. That was to set them up for a bigger adventure: Alaska, in the summer of 2018.

“As physicians we were burned out,” said Rocio. “We wanted something that was in nature, where we could get some fresh air. Alaska just sounded great, getting back to nature and reenergizing ourselves – and showing our kids the importance of the wilderness and some of the things that you miss when you live in a big city.”

The Harbisons are independent, self-guided travelers from way back. “In all honesty, we’re not cruise kind of people,” said Rocio. But this time they opted for a cruise because of the need to navigate great distances and have access to remote sites like glaciers. The Princess Cruise also offered educational activities for the kids, and the shore excursions allowed travelers to choose their own adventures at every port, including some pretty off-the-beaten trail options, so they were happy about that. And they opted to spend five days on their own in Anchorage before the cruise began.

This would be their first cruise as a family, and they wanted to be prepared. With five kids, you can’t afford to leave things to chance. With all the practice, they’ve gotten the packing down to an art: one big suitcase for Mom and Dad, one for the girls, and one for the boys.

Rocio’s developed an “outfit of the day” approach so the kids don’t rip through the suitcase and create chaos. That came in handy especially for the wide climate variations in Alaska.

“We put a shirt and a pair of pants together, and we roll them up together,” explained Rocio. “For the day we were going to be in Glacier Bay, for example, I packed turtlenecks and warmer pants, and then for the day we were riding bikes, I packed jeans and short-sleeved T-shirts. I always try to carry an extra shirt in case they get really dirty, especially for the little ones.” And, of course, especially in Alaska, layering is key.

Each child also has their own backpack, which they’re responsible for packing and keeping track of throughout the journey. This is where they keep their snacks, a plush animal, an extra set of clothes, their electronics and a book. 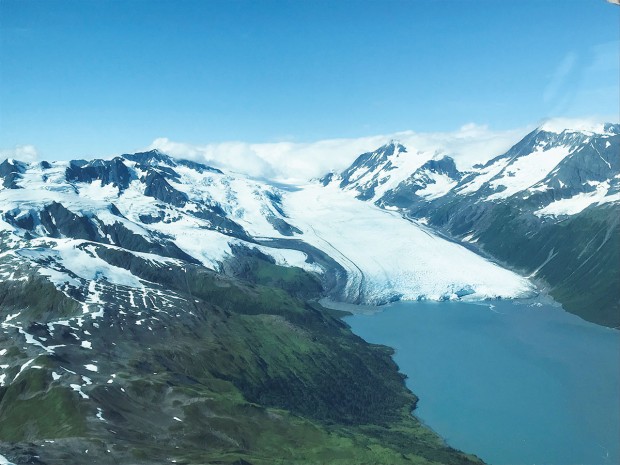 WORLD OF WONDERS The Harbisons were thrilled with the views of glaciers, wildlife and Prince William Sound with a pilot from Rust's Flying Service. The plane landed in pristine environments where they could observe the animals, harvest wild blueberries and witness a glacier calving.

In the early days, Rocio and Matthew would each pair off with one of the little ones; now that the kids are bigger, they pair each of the little ones with an older brother or sister. That frees them up to spend a little time together on the flight.

“Now they take care of each other, and they do really, really well,” said Matthew. “I think one of the best compliments we ever got was after one long flight when we stood up and were making sure we had everything, and one of the passengers near us said, ‘Man, I’m proud of you – I didn’t even know you were traveling with kids.”

Excitement fairly burst from the twins, who couldn’t wait to share their favorite moments.

“Our dad found wild berries that bears eat – and, and, we brought them to our hotel so we could make a stew with it!” recalled Aspen.

For their time in the Anchorage area, they chose to stay at Alyeska Resort, a short drive from the city but far enough to be immersed in nature. The ski resort shifts in the summer months to a departure point for wilderness explorations, and its gondolas and shuttles serve to deliver its passengers to trailheads high in the mountains.

Highlights included their first hike – 3½ miles, just to get them acclimated. They ended up at the mountaintop Seven Glaciers Restaurant, where they could look out and actually see seven glaciers.

“It was misting and raining the entire time – it was great,” said Matthew. “We were nervous about the kids, but they were absolutely fantastic.”

A naturalist oriented them as to what plants they were seeing, and which ones they could eat; the wild blueberries were ripe so they feasted on the delicious fruits all along the way.

The most challenging part was when they came to a pulley system used to cross a huge chasm. The ropes were wet and heavy, and they weren’t sure they could do it – but fortunately some French and Austrian tourists came along, and they all helped each other across.

In the following days they used a company called Rust’s Flying Service to go bear watching in Chinitna Bay, where they observed as the magnificent creatures fished for salmon and mussels, which they pried open with their strong claws. They also flew a water plane over a number of glaciers and took in the spectacular views; they landed on one of the bays and explored the islands, watching the glaciers calving and hearing the crack and boom as the huge slabs of ice fell into the sea. 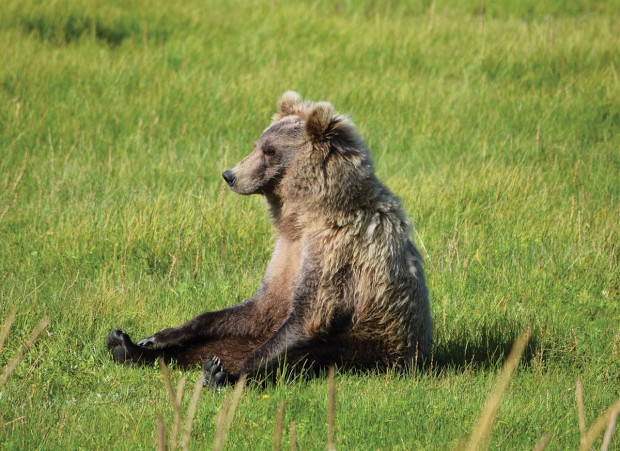 WORLD OF WONDERS The Harbisons were thrilled with the views of glaciers, wildlife and Prince William Sound with a pilot from Rust's Flying Service. The plane landed in pristine environments where they could observe the animals, harvest wild blueberries and witness a glacier calving.

The effects of climate change were manifest on this trip, as guides showed them where the glacier used to be and how far it’s receded. In the case of the Mendenhall Glacier, one of the most impressive ones they were able to see, it has retreated about 2½ miles since its height in the 1700s; but in just the past 30 years, the changes have been dramatic, and have become central to the National Forest Service and other naturalists’ presentations to visitors.

Mendenhall Glacier was just one of the many eye-opening excursions along the way; they were entranced by the gooseberries and blueberries of the islands, and the squishy peat bog that they were able to walk on.

For Alanna, it was the huskies that pulled the sleds that won her heart – especially the puppies. “They were like mini wolves,” she recalled, smiling at the memory.

Natalia loved learning about the medicinal uses of native plants, such as one referred to locally as Devil’s Club or Alaskan ginseng, used locally for a variety of skin ailments.

Gabriel recalled the perfect clarity of the waters, the powerful beauty of the waterfalls and the amazing sight of salmon swimming upstream against a powerful current, their silver bodies flashing in the sun. He was also fascinated by the native culture, which they were able to learn more about from the native sled-dog handlers.

“I think I have more respect for wildlife and nature after the Alaska trip,” said Gabriel. “It gave me a sense of some of the culture you could find there among the Alaskan people.”

An hour passed quickly with the Alaska memories, and we hadn’t even gotten to London, or France or Germany. “We’ll have to tell you about eating across London with five kids, another time,” promised Matthew. A promise I hope one day we’ll keep.