Friends, open mic and The Beatles 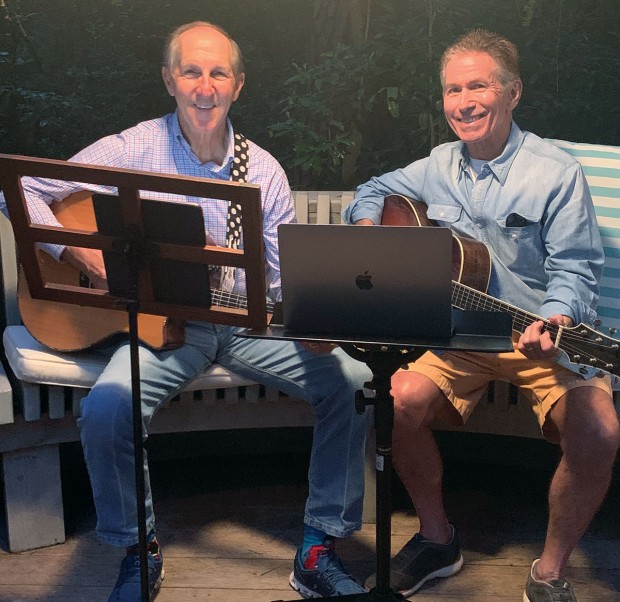 Jack Selber and David Wadler didn't let a pandemic stop them from participating in Beatles Open Mic Night. They brought the music to David's backyard and played live with a Facebook group.

Just south of downtown, in an unassuming strip center, an incongruous group gathers each Wednesday for Beatles Open Mic Night, among them a former Enron employee, an ER doctor, a 19 year old from Sealy, a pothead, an investment advisor and a retired orthodontist.

They all come to Bohemeo's Café to claim their moment on stage and play to the crowd. The only caveat is, “Beatles songs only! Don’t even try to sneak in some Monkees.”

For the past several years, college fraternity brothers Jack Selber and David Wadler have been regulars.

Jack, an investment advisor, remembers playing with David in their band The One Way Street at Tulane. “We came up with the name when we [and two other band members] were in the car, and our friend pointed to a one-way sign. He said, ‘That’s the name.’ I still have the business cards for it.”

The One Way Street played fraternity parties, and they even played a few times on Bourbon Street. During that time, Jack met his wife Phyllis, and David, now a retired orthodontist, met his wife Dede (Phyllis and Dede were sorority sisters). “Then Phyllis and I spent a few years in Shreveport, and David and Dede came here, and I didn’t touch a guitar for years.” 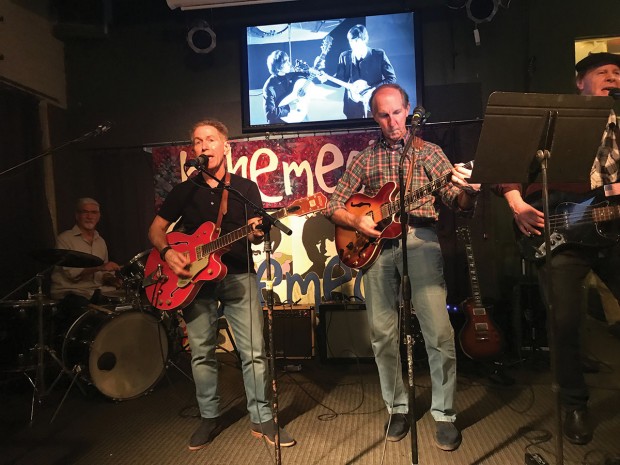 David and Jack played in a band together at Tulane decades ago. Now they play at Bohemeo's Beatles Open Mic Night.

But that changed several years ago, when Jack took up playing again. “One thing led to another,” he says, “and I found this little restaurant and Beatles Open Mic Night. David and I started playing together, and it’s become one of the highlights of the week. You just escape from everything and focus on playing your guitar.

“Being at Bohemeo's is like being at Cheers,” Jack says. “It’s one of those places that you couldn’t plan, but has kind of grown into a little community. Some people come for a while and then you don’t see them, a couple of bands started there, two people got married. We got invited to the wedding in Crosby. David and I say you could make a TV show out of it. It’s all kinds of people who don’t have anything in common except they like Beatles music. The Beatles are the uniter.”

“I remember Jack and I would be sitting in the fraternity house playing those Beatles songs,” David says. “When we got out, I kept playing through dental school and residency in ’73, and I started playing with the band Midlife Crisis and the Hot Flashes in ’81. But when Jack started playing again, and he found this open mic night, we started going. Only problem was we couldn’t sing. We found this one girl, but she was kind of a diva. So we said, ‘The hell with her!’ and took some basic lessons.”

“Fortunately, we found out nobody really cares that we can’t sing,” Jack says.

When Houston shut down for coronavirus, so did Bohemeo's. But two weeks later, the group gathered again over Zoom, then Facebook Live. “Jason hosts it,” David says. “I forget what he does, something to do with media. But he gets everyone together.”

“The first time, I was like, ‘Man, this is really weird,’” Jack says. “But now we have a setup. Nobody’s had haircuts, people are unshaven. We’ve been cooped up for a while.”

During time at home, Jack and David began meeting at David’s house every Wednesday. “We sit apart,” Jack says, “and we have the best time. Neither one of us sees our grandchildren that much right now, so this creates an outlet we wouldn’t otherwise have. Nobody sounds great, because you’re speaking into the mic of a computer. At Bohemeo's we have a stage and mic and amps and speakers. But on Facebook, we don’t have that. When your turn’s over, everyone claps, gives a thumbs up, and then you listen to everyone else.”

“We’ve revived our Wednesdays virtually,” David says. “It’s more fun to be with everyone and be on stage, plus I prefer electric guitar over acoustic, but there’s something fun about this, too.”

At Bohemeo's, Jack says the pair sometimes breaks the Beatles-only rule. “David and I wrote this song while we were in college,” he says. “We had like a verse and a half, and last year we wrote the rest. It sounds kind of like it could be from that time, so we just tell people somebody found it, and it was never released or recorded. It’s our little joke.”

Jack says playing with David is “kind of a legacy from a long time ago.”

It’s a treasured legacy. David says, “The only time we don’t go is if we’re out of town. Or if there’s a pandemic.”

Editor’s note: David Wadler and Jack Selber participated in The Buzz Magazines'' “Name That Tune” video series featuring local musicians. Can you guess the tune? Watch the video here. Play an instrument and want to participate? Email us at [email protected].