Fighting Hunger, One Lap at a Time 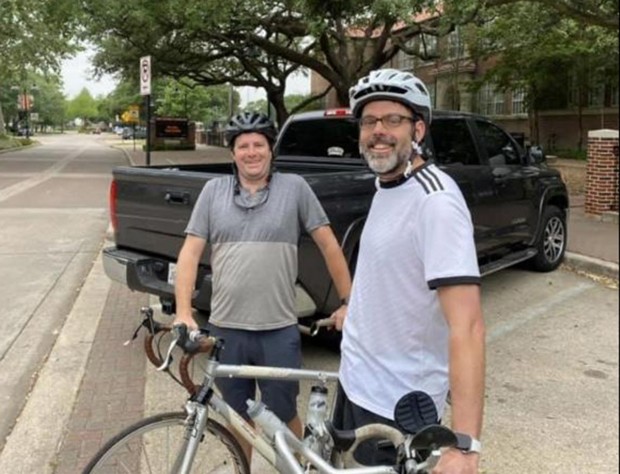 Sean Cunningham and Taylor Brown in front of West University Elementary, ready for their 100-mile adventure.

If you’re an elementary-school parent, between all the school drop-offs and pick-ups, the “I forgot something” fixes, the “not feeling well” rescues, the student performances, holiday celebrations and so forth, you can be left feeling like you must drive at least 100 miles around the campus during the school year.

Recently, two dads did just that. Literally. Taylor Brown and Sean Cunningham rode circles around West U Elementary for 100 miles – on their bikes, for a good cause.

Taylor and Sean became friends as their wives, Josie Brown and Allison Cunningham, were college roommates. In addition to having good taste in wives, they are both avid bikers.

Taylor was feeling concerned about the growing needs of food availability for Houstonians during the coronavirus quarantine. He felt compelled to help.

So Taylor called Sean to pitch an idea: “What if we rode our bikes 100 miles in one day around West University Elementary? I measured the lap - it’s 2/3 mile – so, to pull it off, we’ll need to ride around [the school] 150 times!”

Sean shared, “Taylor's brainchild was just crazy enough to work. He asked me to assist because I am one of the few people that would ride 100 miles in a .67 mile loop.” 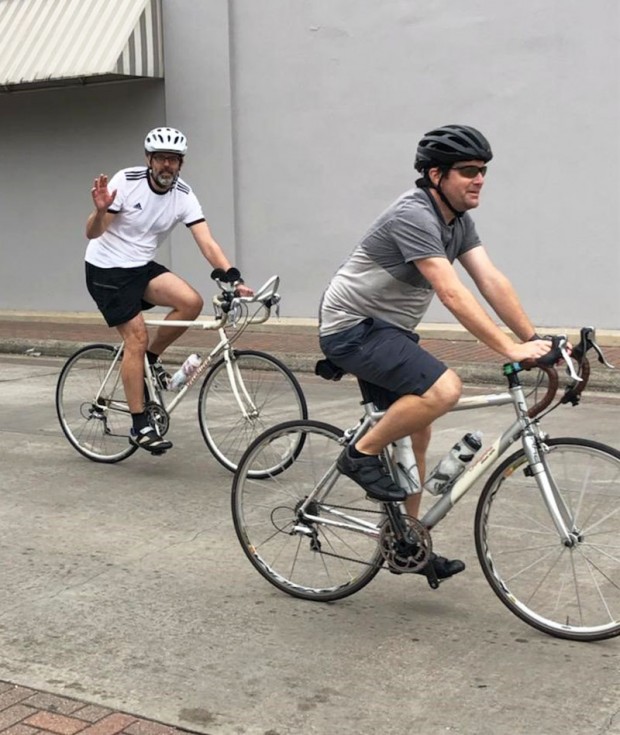 Sean and Taylor, pictured during their ride. Taylor waves energetically, despite the fact that he's already driven past that same Edloe St. building hundreds of times already.

The lap included: University Blvd., Auden St., Rice Blvd. and Edloe St. Taylor and Sean thought the ride would be a good, safe and doable option for a fundraiser, which would raise money and awareness for the Houston Food Bank. There are no hills or wind on the West U route so they figured that, at least that part would make it easier than the Bike MS: Texas MS 150 route, which they both usually ride this time of year. (Due to the coronavirus, the 2020 Bike MS: Texas MS 150 has been rescheduled to Sept. 26.)

Taylor set up a fundraising page with a goal of $2,500 and, on Sat., April 18 at 8:15 a.m., Taylor and Sean hopped on their bikes in front of West University Elementary and the ride began.

Sean said, “The route became a little monotonous, but we had a great time with it. I was getting a little stir crazy in my house, so a .67 mile lap 150 times was a fun outing.” 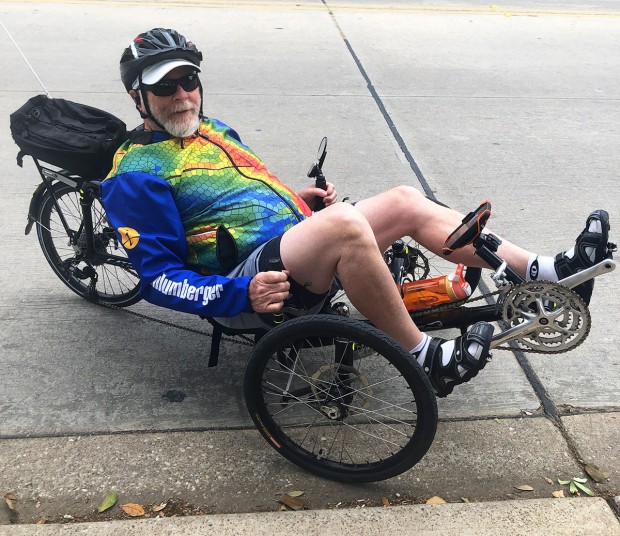 Dick Elwood, Taylor's father-in-law, rode alongside Taylor and Sean for a few laps to show his support.

The pedaling pair had some great motivation with all six of their children riding alongside them for a few laps throughout the day. Taylor’s children, Eleanor, Henry and Grant, attend Annunciation Orthodox School and Sean’s daughters, Cate, Linley and Margaret, attend West U Elementary.

A few fellow bikers who came out to support the guys and ride a few laps with them included Taylor’s father-in-law, Dick Elwood, plus friends David Lintner and Jose Nolla.

They also had friends from the neighborhood surprise them by cheering them on during the ride and at the finish. Friends who stopped by include longtime family friends Mary, Leighton and Georgia Ferguson.

When the ride ended at 4:15 p.m., Taylor reported on the fundraising page: “Great day. One gear. One break. 100 miles, 150 laps, 600 right turns and lots of great friends and family. Thanks to all of you for supporting us and the Houston Food Bank.” 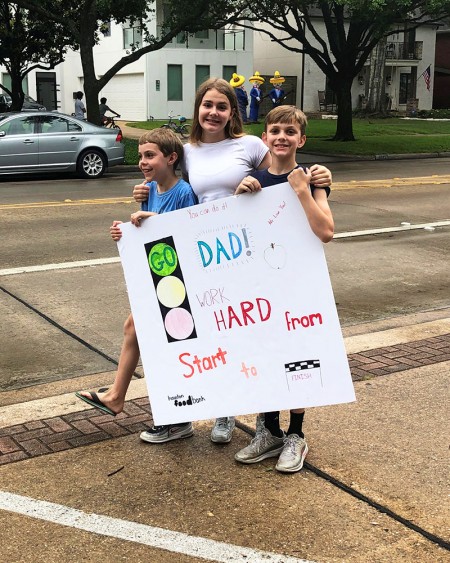 Grant, Eleanor and Henry Brown cheer on their dad with their homemade sign.

Taylor’s mother-in-law, Laura Elwood, shared, “Taylor and Sean just finished the race. It took almost 9 hours. They were tired and happy fellows with really tired rear ends! Their fundraising goal had been $2,500 and their final grand total was $3,256. Kind of amazing.”

Taylor was thrilled that the money raised yielded 10,000 meals to people in need.

“This has been a fantastic experience allowing me to reconnect with so many friends who responded generously with their cheer on race day and their giving to the Houston Food Bank,” he said.  He added that although the fundraiser is over, he is encouraging friends and neighbors to keep helping others during the crisis.

Help keep the drive for a good cause going round and round. Put on your helmet. Let’s go.