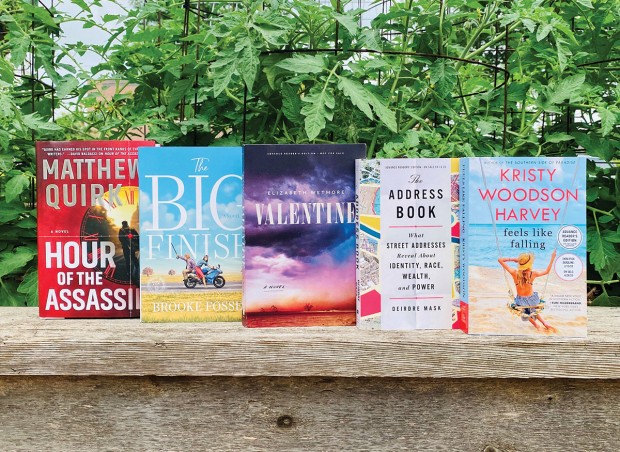 WHAT TO READ This month's picks include a political thriller, a story about community, a debut that takes place in Odessa, a nonfiction book about street addresses, and a fun beach read.

The Address Book: What Street Addresses Reveal about Identity, Race, Wealth, and Power by Deirdre Mask: The Address Book is a non-fiction deep dive into the importance of having a street address. Searching for the answer to a postal question inspired by a letter she mailed to her father, Mask stumbled upon an initiative called “Addressing the World, An Address for Everyone,” where she learned that most households in the world do not have street addresses (even places in rural areas of the United States). Intrigued, she headed to West Virginia to investigate this phenomenon herself by meeting with a friend of a friend who had recently petitioned his local county government for an address. From there, she fell down a rabbit hole of research and eventually ended up writing this fabulous and fascinating history of how streets are named, how street names are about wealth and identity, who counts and who doesn’t, and what happens today when someone does not have an address.

The Big Finish by Brooke Fossey: Debut author Brooke Fossey’s life-affirming novel focuses on the importance of community, resilience and human relationships. Best friends Carl and Duffy, two octogenarians residing in the Centennial assisted-living home, spend their days trying to keep themselves entertained and out of trouble to avoid being transferred to the nearby poorly run nursing home. Duffy finds his life upended one evening when Carl’s previously unknown granddaughter crawls through their bedroom window with a black eye. Pushing aside concerns about eviction and trouble with Centennial’s management, Duffy befriends Josie and sets out on a mission to save her from her abusive boyfriend and put meaning back into his own life. This gem of a book will stay with me for a long time.

Hour of the Assassin by Matthew Quirk: Matthew Quirk’s fast-paced political thriller starts out with a bang, and the action does not slow down until the book reaches its satisfying conclusion. Hour of the Assassin takes place in Washington, D.C. and focuses on flaws in the United States political system and the ability of wealth and influence to insulate crooked politicians. Quirk’s intelligent protagonist and a couple of surprising twists and turns make this thriller worth the read.

Feels Like Falling by Kristy Woodson Harvey: Set in coastal North Carolina, Feels Like Falling tells the story of two women who find themselves in drastically changed circumstances and whose unlikely friendship changes the trajectory of their lives. After losing her mother to cancer, her sister to a crazy husband and her husband to his assistant, Gray unwittingly gets a local pharmacy clerk named Diana fired from her job. Hours before, Diana had broken up with her boyfriend and moved out of their shared home. Feeling responsible for Diana’s job loss, Gray invites her to live in her unoccupied guest house, and as their friendship grows, each learns what it means to find happiness and fulfillment. Harvey’s latest is my favorite book of hers to date – it will provide breezy entertainment for your time at home.

Valentine by Elizabeth Wetmore: Wetmore’s debut novel takes place in 1976 Odessa, Texas, a town centered around the oil business and filled with men who have come to work in the oil fields. Following the brutal attack of a teenage girl by an oil field worker, the town struggles to come to terms with the crime, and battle lines are drawn. The tale slowly unfolds through the perspectives of numerous women in the town – women who understand that the odds are stacked against them but are willing to stand up for what they believe. Wetmore’s lyrical prose and stark descriptions of the dusty landscape and impact of oil discovery on the region create a haunting and ultimately redemptive tale that I could not put down until I reached the last page.