The Garden That Came to Be 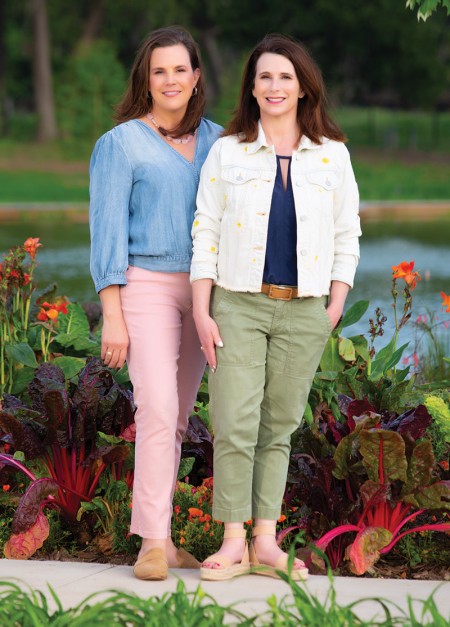 REMEMBERING MOM To honor their mother and her appreciation for the environment, sisters Beth Black and Gretchen Hilyard (along with their father, Mike Garver) dedicated a public garden in her memory. (Photo: lawellphoto.com)

About four years ago, behind her dad’s two-story brick home along Buffalo Bayou, Beth Black noticed an assortment of dog toys and lawn chairs, oddly strewn about one area of the yard.

Only a few weeks had passed since Beth’s mom, Susan Garver, had passed away from a heart attack, and Beth was hanging out on the back porch with her sister Gretchen Hilyard and her father Mike Garver.

When Beth inquired about the vaguely organized array of random objects in the yard, her dad told her that, originally, they were going to be her mom’s 79th birthday present.

“He told us that he was going to make a flower garden that she could see from her bed,” said Beth. “He’d mark out the spot with dog toys and lawn chairs, then run back up the stairs in the house to see if he could see the garden from the bedroom window.”

Susan, struggling with health problems at the time, had been spending more hours in bed. Mike, knowing his high school sweetheart and longtime wife adored gardens, decided to plant her one that she could admire from her room. She passed away before that could happen.

When they heard his plans, his daughters were inspired. 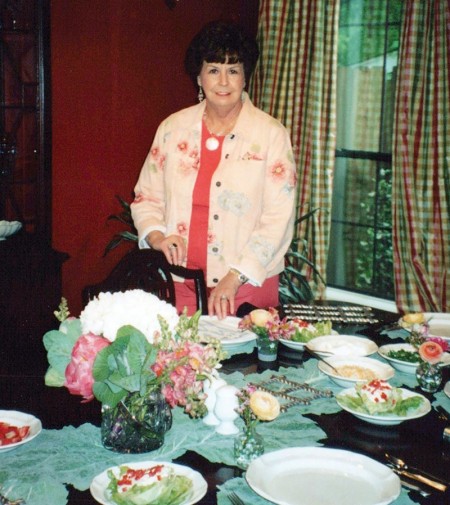 “Mom loved arranging flowers,” said Gretchen. “It’s been a theme of our whole life that she loved the beauty of flowers.”

Both Gretchen and her older sister Beth – former teachers who now work for their dad’s real estate company – have vivid, early memories of going to the neighborhood nursery each summer with their mom to pick out seed packets. Beth remembers picking out bachelor buttons, quick-growing flowers in an array of colors. Gretchen recalls the zinnias, perfect cutting-flowers to add to an arrangement, as their mother taught them.

Back then, in a section behind their childhood home in Meyerland, their dad had pulled out the bushes, tilled the soil and apportioned out space for the girls to plant their seeds.

Even now, as the sisters navigate their own work and families – both are married, and each have two adult children –  the lessons their mom taught them about flowers are often top of mind. For instance, she told them that using an odd number of flowers instead of an even number makes an arrangement look more natural, and she taught them how to match flower arrangements with their place settings.

“Sometimes, I’ll think of an idea for an arrangement, like, ‘I’m going to make this entirely red flower arrangement.’ And then it hits me, no, Mom wouldn’t have liked that,” says Gretchen.

Her mom, born and raised in Kentucky, was widely known as a social butterfly and a gracious hostess. She enjoyed entertaining her friends and family; Gretchen recalls that her mom used to formally set the table every night for dinner, with silverware that might not even be needed.

To honor their mom, Gretchen and Beth wanted to create a public garden that all could admire. 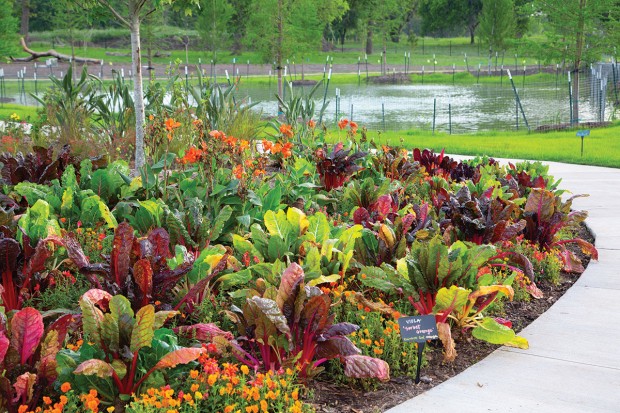 Today, the Susan Garver Family Discovery Garden is a three-acre, serene space that marks the first completed section of the Houston Botanic Garden, just a mile off of I-45, east of the mid-century, ranch-style homes in the Glenbrook Valley neighborhood near Hobby Airport.

Now well into construction on a 132-acre site along Sims Bayou, the Houston Botanic Garden is a massive project that stems from a 30-year-old vision, when Nancy Thomas – past president of the Garden Club of America – and the late Kay Crooker advocated for a botanic garden in Houston that would rival that of other metropolitan cities like New York City. In 2002, the two women created a non-profit whose sole purpose was establishing a botanical garden.

It was when Mike was working on gifting his wife a backyard garden in 2016 that plans for the city garden were beginning to take shape. Houston City Council had, the previous year, unanimously approved a contract with Houston Botanic Garden for a 30-year lease of the Glenbrook Golf Course, providing a site for the garden. Houston Botanic Garden supporters had to meet a $20 million fundraising goal by the end of 2017 to take control of the property, then a neglected golf course owned by the city.

At Susan’s funeral in March 2016, the Garver family requested donations to the Houston Botanic Garden in lieu of flowers. And the following year, the family made a transformational donation, helping the organization reach its fundraising goal and putting the space on track to open in fall 2020.

The Garvers visited with Houston Botanic Garden organizers several times over the next few months to see the plans for the garden, developed by West 8, a landscape architecture firm based in New York.

The garden, unveiled at a sneak-peak event this January, is one where kids have open space to play and engage in interactive activities, like riding on a see-saw that pumps water when ridden. It features a central lagoon surrounded by flower beds, including  the rainbow perennial bed – with flowers arranged in order of the colors of the rainbow – another with carnivorous plants, and a boardwalk maze lined with Louisiana irises, now in full bloom. At the far end of the garden is a hill with loblolly pines and plenty of space for kids to jump and play.

Mike downplays his part, noting that the garden he planned for his wife in his backyard was “only a concept” and never came to fruition.

And yet, it was Mike – running up and down the stairs of his home, trying to find the ideal spot for his backyard plot – who planted the seeds for The Susan Garver Family Discovery Garden.

Larger than what the Garvers may have initially envisioned, that space is the home of wildlife – symphonies of frogs begin chirping come sunset, ducks and turtles gather on the edge of the lagoon and caterpillars find refuge on host plants.

“You can see where kids will be using all of their senses,” Beth says.  “Mom would just think it’s perfect.”

The Houston Botanic Garden is scheduled to open in fall 2020 with the completion of Phase I, the $35 million portion of an $80 million master plan.

Visitors will enter the garden by driving up Park Place Boulevard, just off of I-45 South, and then turning onto a newly constructed bridge that crosses over the Sims Meander to a parking lot, picnic area and welcome pavilion.

In addition to The Susan Garver Family Discovery Garden, Phase I will include the following spaces, accessible with a paid entry ticket: 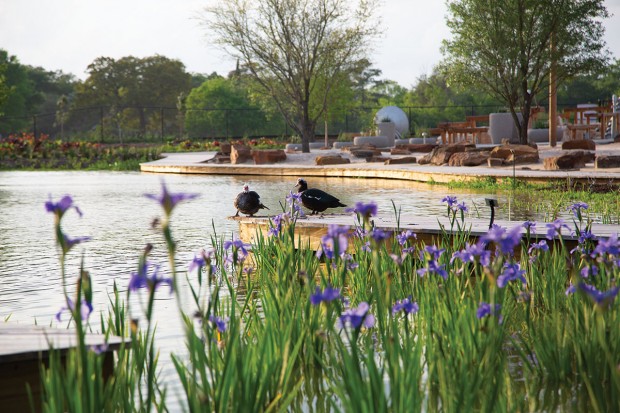 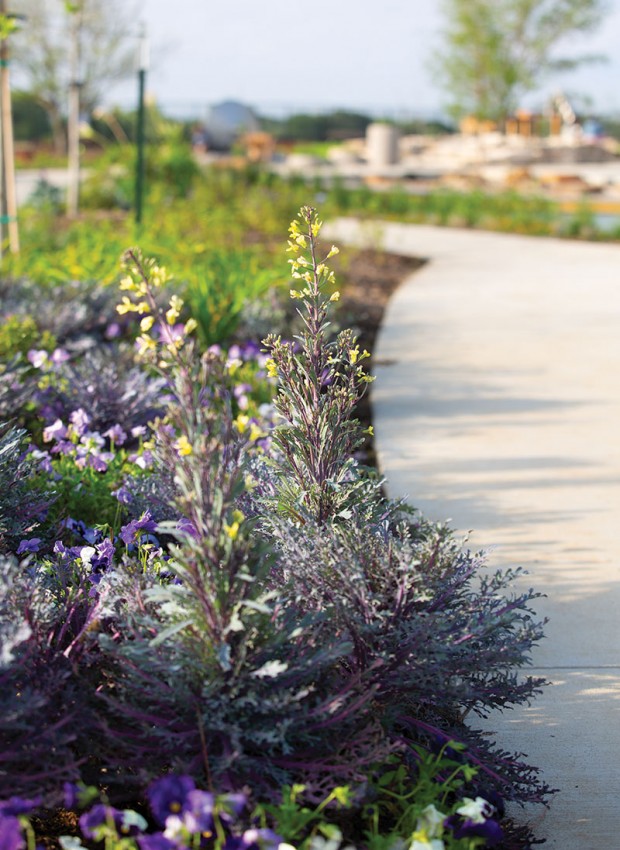 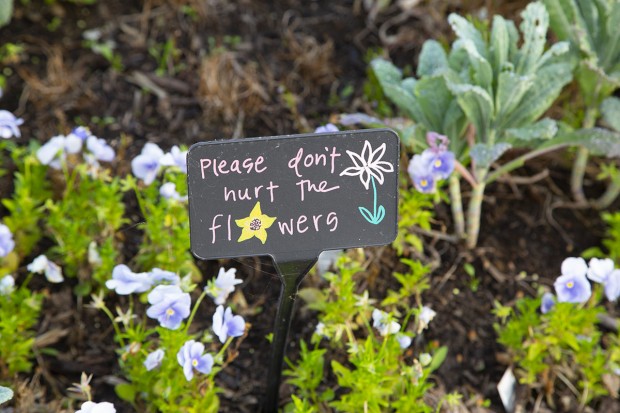