Musaafer Takes Guests on a Journey through India’s Flavors

Never in a million years would Shammi and Mithu Malik have thought they’d be opening a restaurant during a global pandemic. Yet here they are, doing just that.

After almost two years of concepting and planning, the husband-wife duo this week opened the doors of Musaafer, a high-end Indian restaurant unlike anything Houston has ever seen when it comes to South Asian cuisine. Located at 5115 Westheimer Road, the expansive 10,000 square foot space features six distinct dining rooms plus an outdoor patio, each with a different look and feel and with items entirely custom-made and shipped from India. Translating to “traveler,” the restaurant’s name, Musaafer, is a tribute to the common thread between each of the rooms and between the array of dishes on the menu. 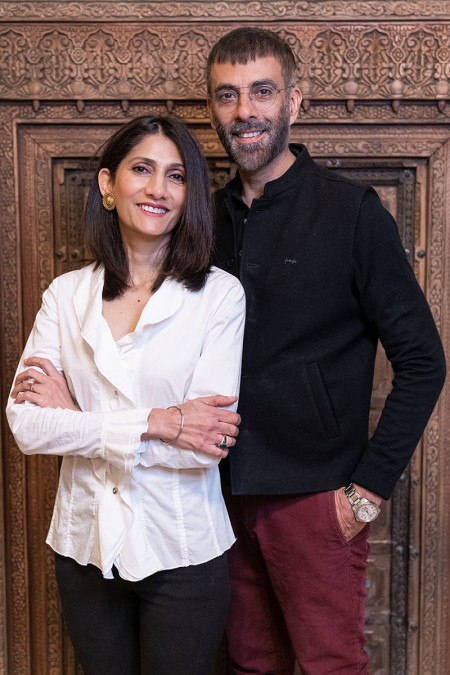 “All the spaces are interlinked by the thread of the journey,” said Mithu. “These are different spaces where the traveler may have visited in his quest for recipes and spices.”

The menu was inspired by a literal journey: the restaurant’s executive chef Mayank Istwal took a 100-day journey throughout India, where he cooked with families in villages across India in order to inspire the seasonally changing menu.

Chef Mayank speaks passionately about the eye-opening experience of traveling throughout his home country and discovering “forgotten recipes” that never made it to the mainstream. He says home cooks are the best cooks, and authentic recipes that have been passed down from grandmothers to mothers to their children in every corner of the country are what the restaurant uses as inspiration.

While many Indian restaurants around the world are labeled as either “North Indian” or “South Indian,” Musaafer’s menu seeks to give patrons a flavor from each part of India’s cultural history. 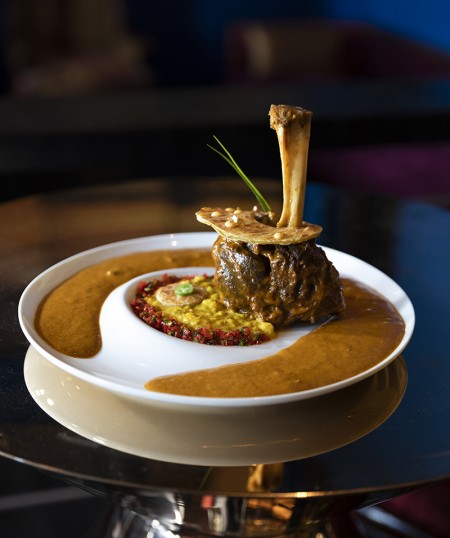 “India has had influences from the Portuguese to the Dutch to the British to the Turks to the Mughals,” explained Shammi, who was born and raised in northern India. “Everyone who has come, whether to trade or to invade, the one thing they left behind was their influence in the food. That’s how you have such a varied experience in India in terms of ingredients used and tastes, and we wanted to bring that all through our restaurant.”

Though not yet available due to Covid-19 related restrictions, a 12-course tasting menu will be one of the hallmarks of the restaurant, the Maliks emphasized. One of the restaurant’s rooms, called the Shadow Room, is a spaced dedicated for these exclusive tastings, which will be available only on booking.

“We are taking you on a journey throughout India through our 12-course meal,” said Mayank. “There will be a lot of storytelling about each dish, and all of the food we’ve prepared will involve all of our taste buds.”

Other rooms in the restaurant include The Sheesh Mahal, a high-end event space inspired by palaces of India that boast a “Palace of Mirrors” (Sheesh Mahal). Also of note is The Traveler’s Room, which features a 12-foot tall gilded sculpture and a Dhokra Wall, a key Indian design element with brass carvings.

Musaafer marks the first U.S. restaurant for the Maliks, whose Dubai-based brand, Spice Route Co., has over 14 global concepts. Shammi said he had been wanting to expand to the U.S. for a while, and it was a frequent customer at his restaurant in Lagos, Nigeria who suggested he look to Houston. 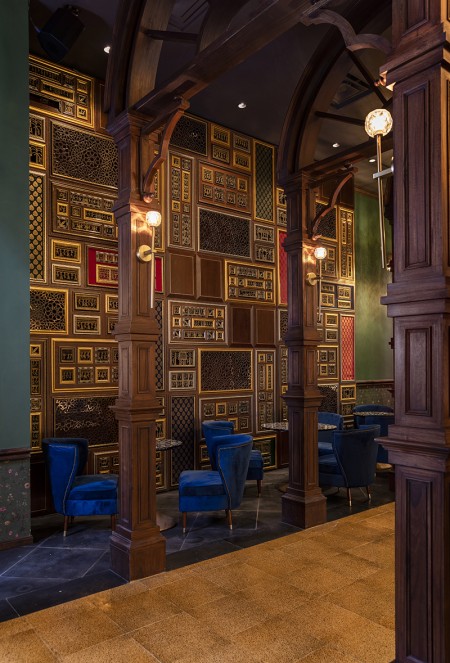 Inside the Traveler’s Room is this traditional Dhokra Wall, a key design element in Indian culture that features brass carvings. (Photo: Julie Soefer)

“There was one gentleman who was a friend of mine and he was working for a company in Houston and would shuttle between Houston and Lagos every month,” said Shammi. “For a year, he was telling me to make the trip [to Houston].”

Finally, Shammi visited Houston and realized the demographics, size and culture of the city made it an ideal fit for Musaafer.

“In terms of what it had to offer, it was perfect,” he says.

Currently, Musaafer is open Sunday through Thursday from 5-10 p.m. and Friday and Saturday from 5-11 p.m. for dinner service. Lunch and brunch will begin at a later date.

The restaurant is taking precautions due to the coronavirus, exceeding the guidelines set forth by the CDC and WHO. The restaurant will be practicing social distancing and have installed several hand sanitizing stations throughout the space. They will be facilitating daily temperature checks for their staff. An attendant has been hired to sanitize the restrooms after each use, which is limited to one guest per time. 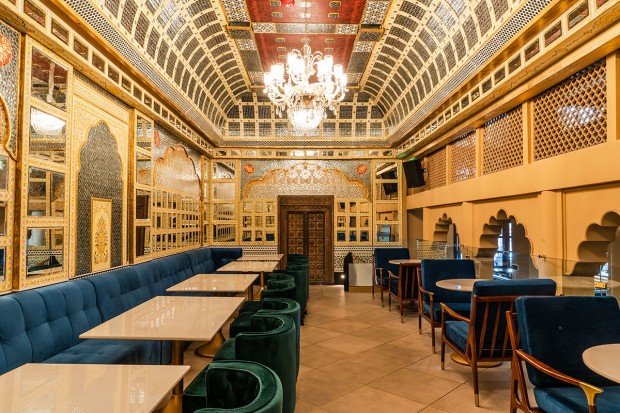 The Sheesh Mahal, or “Palace of Mirrors,” is a high-end event space inspired by the palaces of India. (Photo: Michael Antony) 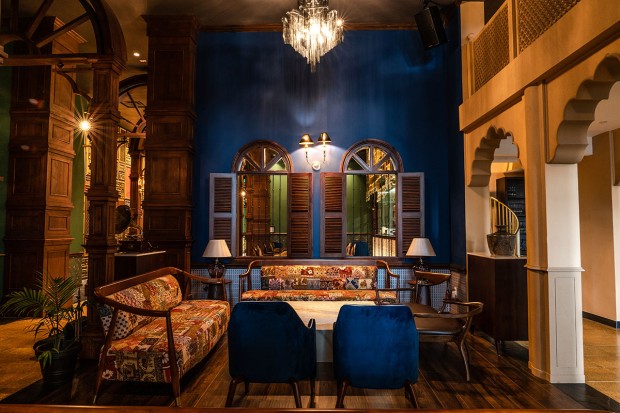 The Diwan Lounge is meant to be an ode to the lounges commonly found in affluent Indian residences. (Photo: Michael Anthony) 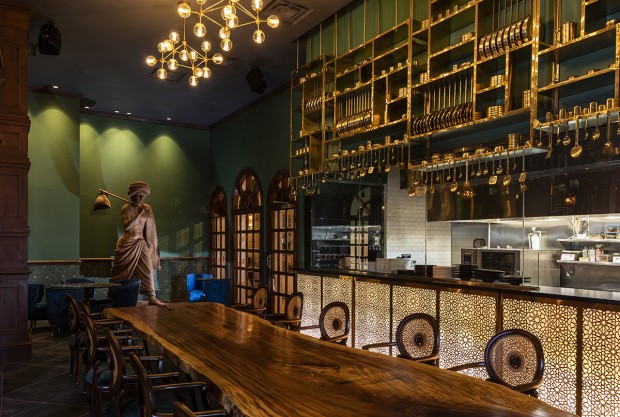 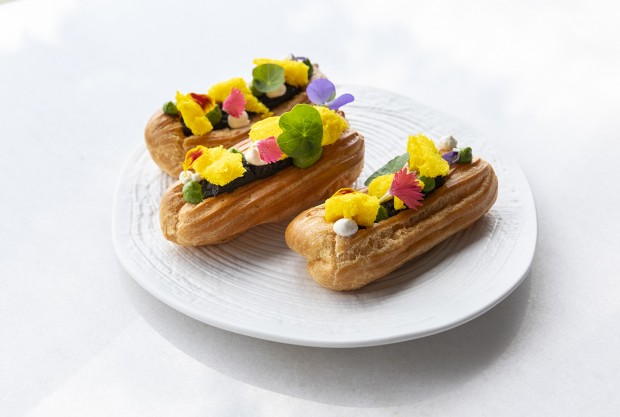 The Mushroom Galouti EClaires are an appetizer with mint, yogurt and saffron. (Photo: Julie Soefer) 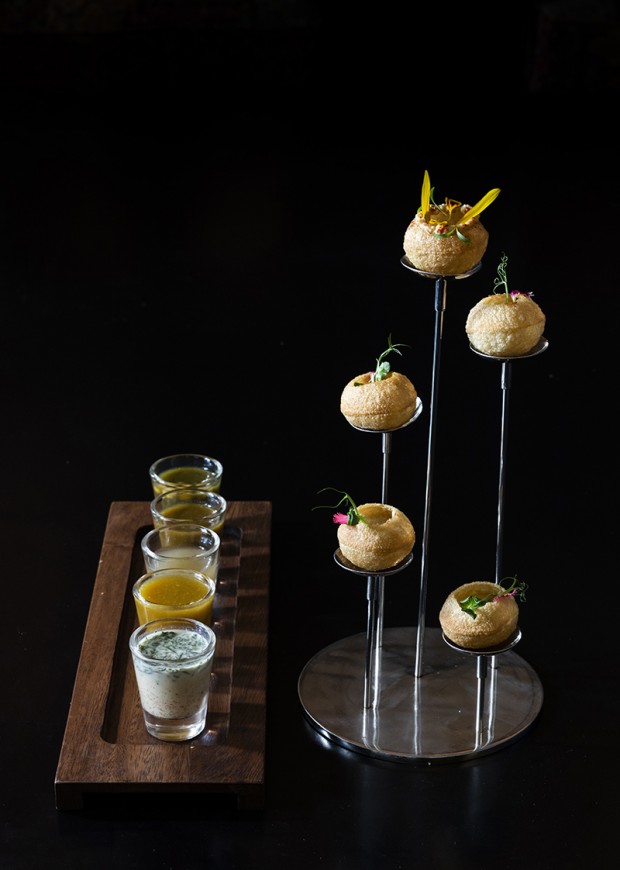 Paani Poori, an appetizer made of crispy pouches filled with five different fillings, is a common street-food in India. (Photo: Julie Soefer)